So we all went to the recent Jane Eyre adaptation and we all went a little blarmey when Rochester is all, like: “You have transfixed me quite.” 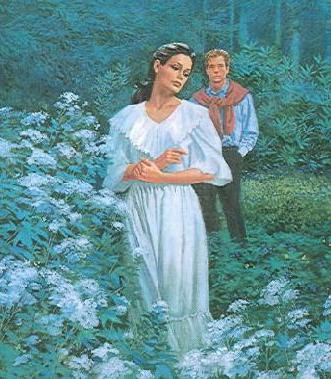 For those (few) of you I have not yet converted to the Church of “Blue Castledom” (read this article, if you will. This one is fun, too, if you want a good reader comment weigh in whether or not Valancy and Barney had sex ---it even references the Hitchcock film 'Notorious' and you can read my CONVINCING you to read The Blue Castle in Aarti's With Reverent Hands series, because we like that)  I give you…

“Ever dream of ballooning?”
“If you buy your experience, it’s your own…Someone else’s experience can never be yours.”
“I never satisfy curiousity.”
“Piffle”
“Those silences at the back of the north wind got me. I’ve never belonged to myself since.”
“So do you want anything but salt codfish, then?”
“It will exonerate me in the eyes of your kindred from the suspicion of having poisoned you.”
“Once in a thousand years, you know, one cat is allowed to speak.”
“The moon belongs to everybody”
“I’m really quite a middle-aged dog.”
“You think you are free now because you’ve escaped from a peculiarly unbearable kind of bondage. But are you? You love me…that’s a bondage.”
“That’s all we can hope for---the freedom to choose our prison.”
“You’re maddening---especially in twilight or moonlight.”
“In spite of your ancestry, there’s something wild and remote and untamed about you.”
“There are so many different kinds of loveliness, Valancy.”
“Forsooth” (he actually says forsooth. *giggle *)
“You’re in the very core of my heart. I hold you there like a jewel. Didn’t I promise you I’d never tell you a lie? Love you! I love you with all there is of me to love. Heart, soul, brain. Every fibre of body and spirit thrilling to the sweetness of you. There’s nobody in the world for me but you, Valancy.”

And …. The ultimate: “You know nothing of the beauty of the world. We’ll climb mountains, hunt for treasures in the bazaars of Samarcand---search out the magic of the east and west---run hand in hand to the rim of the world. I want to show you it all—see it again through your eyes. Girl, there are a million things I want to show you---do with you --- say to you. It’ll take a lifetime.”

Do any of Montgomery’s other heroes get such AWESOME page-time.
Well-played, Mr. Snaith, well-played.

A Fair Substitute for Heaven: dedicated to shameless and irrational Barney Snaith love since 2006.


Just for Unexpected Fun: amazon.com recommended this book for me this evening. I wonder if this guy knows what name he has.
Posted by Rachel at Thursday, September 01, 2011

Email ThisBlogThis!Share to TwitterShare to FacebookShare to Pinterest
Labels: lmm

"Piffle" is one of my favourites.

I basically like everything he says--- especially when he is all up-in-arms over valancy calling him john foster. like "what did I do to deserve a slam like that"

LE UNF. I don't know why, but "I'm quite a middle aged dog" is one of my favorites. I always think it's SO SEXAAAAY when he tells Uncle Benjamin he's thirty-five.

I'm sending this link to my sister, we have spent HOURS discussing the did-they-or-didn't-they question. (I'm a Didn't; she's a Did.)

P.S. There is NOTHING irrational about loving Barney Snaith. I've been in love with him since I was fourteen (and I'm quite a middle-aged dog now) and probably will never outgrow it.

Somewhat OT: Do you love "Notorious" too?? We really are kindred spirits! :-)

@Joni -- I can't honestly say I've spent hours on the question :-), but I lean toward the Did point of view, myself.

oh, joni my love, they so totally DID it --- valancy mentions the feeling of having barney's arms around her and his cheek against hers; she mentions near the beginning of the book that she wanted fat babies of her own( and then blushed because that was "unmaidenly of her") I think that was Maud's way of pushing the envelope. And they have a very strong and close connection; moreover he refers to very intimate physical parts of Valancy-- like the kissable dent between her shoulderblades. I think they did, to tell you the truth. Maud pushed the envelope herself ( as she writes in her journals ) when it came to her very physical relationship with Herman Leard, a young, poor farmer that she felt a strong physical attraction to in her youth. In some ways it was funny, because even though they connected on a physical level; it was their lack of intellectual compatibility that stirred her away; but she mentions doing things that no upstanding christian gal of her era would do.... i do think that barney and valancy did it. they were married, it was a small cabin in the winter and in the woods and Valancy liked to hear his regular breathing next to her's -- and she puts cousin Georgiana's quilt on their bed--- there are enough inferences to their sleeping situation that i think they did more than sleep--- FUN DISCUSSION! EVERYONE!!!

yep. I like notorious. i am not a huge hitchcock fan; but i like it. i love classic films, though.

now voyager??? HELLO LOVE NOW VOYAGER ( and zillions of others; but that came to mind because bette davis' character's relationship with her mother was very Valancy and her mother----

JONI I AM SO HAPPY YOU SHOWED UP! I was so intrigued by your toby stephens thing--- i mused on it for months before giving it the proper time. what an agreeable pastime sitting and thinking about his perfect features for barney....

I just finished re-watching the 2011 Jane Eyre and I think Michael Fassbender-- with some red added to his brown --- might make a good Barney understudy at some point.

You gals should take a look at that amazon link--- how INSANE is it that there is a christian relationships author whose name is barney snaith?

I loved The Blue Castle and Barney. He's one of my favorite romantic characters. I could see Fassbender as Barney.

@chrisbookarama isn't barney just delicious! talk about a marriage of equals! they have such a preternatural kinship it smacks of rochester and jane (montgomery was heftily influenced by the brontes).

He really is L.M. Montgomery's best hero. (Says the girl who loves them all!)