I always re-read some of my favourite books at Christmas and this year is no exception.

I packed last night for two weeks at home and while I packed numerous books I have not read, I also loaded up my gorgeous STRAND bag ( right from Greenwich Village and the largest used bookstore in the world ) with:

Vienna Prelude (Thoene) --- I have read this every year since I was 12. Always at Christmas. The first book I ever re-read

The Man with a Load of Mischief (Grimes)

the Blooding of Jack Absolute (Humphreys)


I will let you know if I think of any more.


Remember to get your hands on a copy of The Guernsey Literary and Potato Peel Pie Society by Mary Schaeffer because I LOVED it!


Starting Ariadne Franklin's City of Shadows because I am hankering for something to do with the Romanovs and this looks thrilling and fun.
Posted by Rachel at Thursday, December 18, 2008 3 comments:

I snatched this from At Home with Books


1. Do you have a favorite author?
This is a really tough question because I have favourite authors for favourite genres. I have authors who are my favourite for very different reasons. Usually, when asked big umbrella questions, I answer Charles Dickens.

From a scholarship point of view, it's LM Montgomery

gah! too many.
2. Have you read everything he or she has written?

Yes. I have read it all ( atleast I think I have, he was so prolific; but, a lot of letters, the serials, Sketches by Boz.....)
3. Did you LIKE everything?

I like the range of everything. I respect everything. Some books are better than others---but no two are the same.
4. How about a least favorite author?

Dan Brown.
5. An author you wanted to like, but didn’t?

Libba Bray is one. I was so excited about the Spense Academy books. The covers were gorgeous and I love historical YA but yawn. I hate it when authors' blogs are more clever than their novels ( which is the case here )
Posted by Rachel at Tuesday, December 09, 2008 2 comments:

harry potter and doctor who hybrid...what? 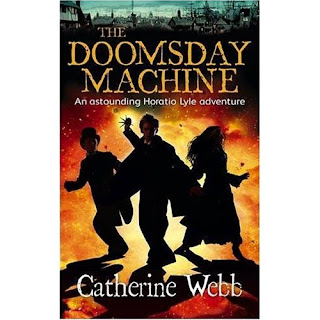 Book covers and editions fascinate me. They are part of the bibliophilic experience and I collect numerous editions of my favourite books. Some for the covers;some for translations; some for prefaces or biblographies or historical significances or footnotes.


Here we have the upcoming edition of The Doomsday Machine -- the third volume of my beloved Horatio Lyle sequence.
Posted by Rachel at Monday, December 08, 2008 2 comments:

But, the most exciting thing in my world right now is the fact that glorious TVO has a headstart on Masterpiece Theatre and is showing the new ITV Dickens' Season starting with The Old Curiousity Shop .... HUZZAH


Just like the Jane Austen Season of yore... only better.


Lots of carols to sing in church tonight! Woot!
Posted by Rachel at Sunday, December 07, 2008 2 comments:

And we had not talked about this before...how?


I was chatting with a friend at work yesterday. Someone with whom I have shared a SUITE at past conferences, yipped to ad nauseum during the day, eaten meals with and somehow (???!!!!!! ) we had never discussed that her favourite authors include

How does that not come up? HOW?

I mean, sometimes, I will find someone who intersects genres with me ...mayhap a Reginald Hill fan ( they are few and far between in my world, so it would seem ) but Reginald, Martha Grimes AND Patrick O'Brian?
Posted by Rachel at Wednesday, December 03, 2008 No comments:

Email ThisBlogThis!Share to TwitterShare to FacebookShare to Pinterest
Labels: aubrey-maturin, is it my birthday?

While reading Scott Lynch this weekend, I was forced to think about all of the books that I love that a lot of people would never stumble upon or read under normal circumstances.

So, I give you a bunch of books that have probably fallen under your radar, but are worth every word:


The Blooding of Jack Absolute by CC Humphreys. You've probably heard of Sharpe by Bernard Cornwell, you probably haven't heard of Humphreys. I love this series. Especially this book. It's one of the funniest I have ever read.


The Extraordinary and Unusual Adventures of Horatio Lyle, The Doomsday Machine, the Obsidian Dagger by Catherine Webb. Actually, if you have stumbled upon this blog you have read about them because I seem to talk about nothing else.


Keturah and Lord Death by Martine Leavitt. This is a gorgeous, dark and brooding fairytale with a chilling ending that will steal your breath.


The Lies of Locke Lamora, Red Seas Under Red Skies and soon The Republic of Thieves by Scott Lynch. Sort of George RR Martin, Sort of Robin Hood, a heist and witty repartee that would make The Sting jealous, the best of high fantasy/imagined historical fiction.


Tribes by Arthur Slade. If you're Canadian, you have probably heard of Dust and Megiddo's Shadow but you probably skipped Tribes. Shame on you. Good book.


The Spell Book of Listen Taylor by Jaclyn Moriarty. This book is published by House of Anansi and has not quite risen to the status of The Year of Secret Assignments or The Murder of Bindy Mackenzie but it is brilliant and worth the read.

Deafening by Frances Itani. Set in small town Ontario during the years preceding and during the Great War, a well-spun romance between a deaf woman and a hearing stretcher-bearer who develop a language of their own. Glimpses of the homefront and the warfront are expounded upon poignantly.


Montmorency: Thief, Liar Gentleman by Eleanor Updale. I am a champion of young adult novels with adult protagonists ( see Horatio Lyle ). A Jekyll and Hyde-esque romp through Victorian London.


The Privilege of the Sword by Ellen Kushner. Medieval-type fantasy starring sword-wielding heroine and a plethora of moody eccentrics.