A few weekends ago, I was part of the Huronia Arts Festival which was fabulous. I also got to meet up with the lovely Aggie who did my publicity photos for Herringford and Watts
I read a bit from Lesson in Love and Murder 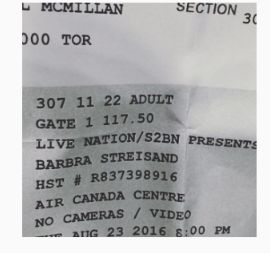 Last week, I was out at a conference for my real job all week: but I did get to sneak in a Jays game AND the once-in-a-lifetime opportunity to see Barbra Streisand

I am off to British Columbia tomorrow for a week of holidays and to hang out with a good friend of mine.... follow my instagram for pics


Lynn Austin Waves of Mercy: this was, without doubt, one of my most highly anticipated books of the year....  I love this author so much and after a short foray into Biblical fiction, it is nice to have some vintage Austin with a multi-generational saga. I am on Lynn's launch team for this book, so you will see my full review and more about it closer to its release date.

The Devil in The White City by Erik Larson: I had to read this book in installments because it scared me so much.  I knew, of course, about H H Holmes and his mass killings and his depraved nature, but Larson is such an exceptional storyteller, that you felt his story unfolding as it does in a horror film, bristling the hairs on the back of your neck.

I love Chicago history and Larson did an exceptional, accessible and addictively narrative job of bringing its conception to life, threaded with the eerie and horrific murders than underpinned its grandeur.

The Secret Ingredient of Wishes by Susan Bishop Crispell   If you like Sarah Addison Allen, you will love this book.  It's about a young woman who is finding herself and accepting her past in a quirky town peppered with eccentricities.  With the warmth characterization of Billie Letts and the narrative ease of Alice Hoffman,  Crispell spins a tale of magic and loss in an artful and beguiling way.   Rachel has an unusual secret: she can grant wishes.  What seems like a blessing is more often a curse as she navigates a new community and the first flits of love.   This is a book to savour, to press to your heart once you've sighed over a gorgeous line or two.   Like this one: "I've come to realize that life is much more fun if you think anything's possible."

I highly recommend this for the evenings yawning into Autumn. An author to keep.
(with thanks to netgalley for the review copy)

And finally,  A Lesson in Love and Murder releases tomorrow 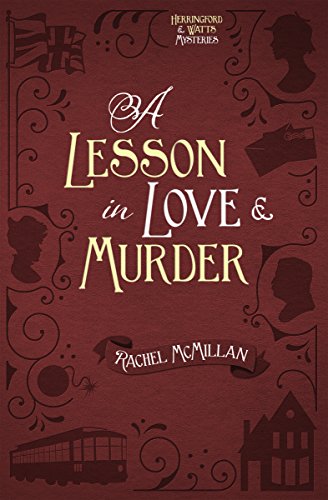 "This was my favorite story so far in this fun series, with lively characters, snappy dialogue, action, adventure and historical figures in the mix. The quips and quotes at the beginning of each chapter, and in the footnotes, add the details needed to fill in references, and added narrative. Benny, the RCMP, was a sighworthy hero, giving Jasper a bit of competition, and shaking Miranda up enough to make it extra interesting. Ray and Jem had a lot to deal with for a newly married couple, and I found myself rooting for them, hoping they'd work it all out. Who hasn't struggled with money, family and communication problems? There are deeper issues underlying the fast paced storyline too, with political activism, domestic violence, faith struggles, and ethical dilemmas.

Catching Up on Reading: mini-reviews

THINGS I HAVE READ

A Perilous Undertaking by Deanna Raybourn:   This series is giving the Lady Julia Grey books a run for their money. I am dashed fond of Veronica and Stoker and I love the Victorian sensibility as well as the undercurrent of adventure.  Sure, there is detection, but I read these for the smart quips and budding romance between our two leads.   If you are in the mood for perfect escapism, then this is a world you can lose yourself in.  Also, Raybourn's voice is snort-worthily wonderful.  LOVE !
note: review copy received from Netgalley

Charlotte Bronte: A Fiery Heart by Claire Harman:  I really enjoyed this book and it is probably one of my favourite Bronte biographies I have read. My favourite aspect was the time it spent with Charlotte in Brussels while she worked for the Heger family.  People like me who consider Villette their favourite Bronte book are usually fascinated by Bronte's years in Brussels and the unrequited love she harboured for M. Heger and his influence on Paul Emanuel.  I really loved this. Quite readable with an academic style and some wonderful photographs and illustrations.

When Falcons Fall by C.S. Harris   I really love the Sebastian St. Cyr mysteries. Moreso for the characters and setting than the actual mysteries themselves.   Also, can we give a shout-out to Hero who is probably one of the best heroines in any mystery running today? I enjoyed how this book took us from London and into Shropshire with a cozier feel than St. Cyr's usual metropolitan adventures. A hefty dose of romance helps keep these on my must-read list.

Bella and the Beast by Olivia Drake:  I requested this on netgalley because Beauty and the Beast retellings are Rachel catnip but I failed to fall for this one.   There was a decided lack of chemistry and the entire plot while wonderful in theory fell flat.

An Untimely Frost by Penny Richards
I am always looking for interesting new historicals featuring lady detectives and Richards' latest was a wonderful yarn!   I love how the Pinkerton agency allowed women to step out of their traditional roles and into the world of deduction.    The Victorian Chicago setting also worked really well for me and I am always beguiled by a splash of the theatrical which is deftly interwoven here.   I must confess that it took me a little while to get into this one --- but that is often the case at a start of a series as I begin to sink my teeth into the world, characters and story.  This was another netgalley read.

In Which I have Neglected This Blog

Between work and finishing White Feather Murders I have been a busy duckling. Which means, blog, I have deserted you.

And I feel badly for that. So, I am sorry, bloggosphere


So, here are some random updates and things I have done:

In theatre news, I saw  Matilda: I really thought the production values were great but it wasn't my favourite thing ever. That said, there were a ton of kids in the audience that went mad for it, so I would bank on that being a draw!


Star Trek: Beyond- Honestly, this cast could just line up and sit on chairs for an hour and I would watch it.  We did see it in this new 4D panoramic thing that was super immersive and kinda neat. I am interested to see how this technology evolves.  Bones won this round.

I was off from my real job last week and went up north to my little hometown to visit my parents. While I finished my manuscript and worked on another project, I did spare some time to catch up on some TV viewing:

Mercy Street reminded me a lot of Lynn Austin's Fire by Night. A strong-willed nurse in the Civil War gives us a glimpse at an upper-class Virginia hotel appropriate as a Confederate Hospital.  The cast is very strong and I was lured in by the historical excellence: the costumes, the references to the greater war at large, the characters

Endeavour Series 3:  I seriously think this is the best television series since Foyle's War (my favourite show of all time).  Shaun Evans is captivating and melancholy and the stories are so intricate.  This is akin to a poetic experience. The music, the cinematography of gold-tinged Oxford, the soft characterization. I love it.  I love Endeavour and Thursday! highly worth watching if you like psychological character pieces.


Grantchester Series 2  Sidney and Geordie fight and make up and then fight again.  The camaraderie and chemistry between the vicar and the policeman as well as the brilliant exposition of 1950s English rural life make this a must-watch

I caught up on some of the movies!   I love this show. I don't care about the plots ( or lack thereof) or the fact that none of these things would ever happen in real life.  I LOVE the characters. I am a character-driven reader and writer so it makes sense that I am a character-driven viewer. I love Oliver. Oliver is the perfect man. Oliver is trying so hard and his first "date" with Shane was to die for.  And SSD plays dirty pool what with its lemon curd cake and playing a Closer Than Ever tune. I can't even deal, guys.


Also, in bookish news, Bachelor Girl's Guide to Murder is on sale for all digital readers at 1.99 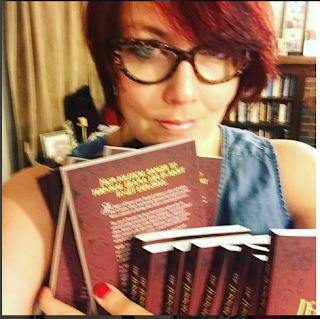