An Absence So Great by Jane Kirkpatrick 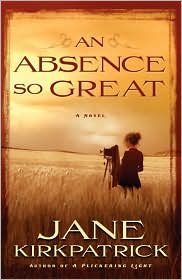 An Absence So Great by Jane Kirkpatrick continues where the excellent A Flickering Light left off. Small-town girl Jessie has honed her photography skills thanks to preparatory apprentice work at the Bauer Studio. In possession of her own camera and fleeing the budding mutual attraction she shares with the very married FJ Bauer, Jessie strives to carve her own path in a society where women’s professional roles are limited.

I really enjoyed the unique premise of the story--- especially in the canon of Christian Historical fiction. Rarely is the romance pursued a forbidden one bordering on an extramarital affair--- a heartbreakingly valid one, here, at that. The story also resonates truth: with striking verisimilitude ( we can thank the source, Kirkpatrick’s feisty great grandmother, for this page turner).

As featured in the first book, photographs and Jessie’s comments on their light and technique and also their back-story help transplant the reader into Jessie’s world.

While Jessie is a flawed character ( refreshingly and believably so), I rooted for her as she endured the prejudices of the era: including one section of the novel when Jessie has trouble securing a bank loan for her own studio because of her sex and the rather harsh treatment given her by FJ’s wife as well as her sternly religious mother.

A real story well-drawn and expertly told, I was pleased to read another erudite addition of Kirkpatrick’s ever-growing bibliography of excellent fiction.

Congratulations to Jane Kirkpatrick for her Christy nomination for the first book in the series. Read my review of A Flickering Light here

Thanks to WaterBrook for the review copy!
Posted by Rachel at Friday, April 30, 2010 No comments:

She Walks in Beauty by Siri Mitchell

She Walks in Beauty is another superior offering from one of the most gifted writers in the Christian historical vein.

First off, I must apologize for the lack of posting. I have been traveling for work the entirety of the past month and jaunting from coast to coast in my beautiful country of Canada for appointments is exhilerating but also exhausting. Nonetheless, I have been reading a tonne!

The book begins as Clara's over-bearing aunt fires her governess and true confidante smashing all Clara's hopes of attending Vassar College by instead arranging for the societal education befitting a young woman on the heels of her debut. Clara is primed and primmed and petted to capture the spotlight of New York's gilded circles and secure a wealthy husband.

The wealthy husband her family chooses is the heir to the De Vries fortune, a past enemy that Clara is used as a pawn to capture--- to right past wrongs and restore the family fortune once lost.
In a manipulative and gaudy game of tainted money and secrets, dipping into the garish hovels of Mulberry Street and waltzing with the likes of the Vanderbilts become the thread that pieces together Clara's world.

As per usual, Mitchell perfectly captures the historical climate and her research is impeccable. Like A Constant Heart and Love's Pursuit before it, a particular era of fashion is explored to emblemize the societal restrictions placed on women and as a particularly resonant symbol of female repression. Here, the corset is seen as a torturous contraption for female suffering. Indeed, some of Mitchell's accurate descriptions of its effect on women---be it through female "hysteria" or more gruesomely violent physical effects will leave readers cringing.

Mitchell, here, does not play with mutiple narration in the same way as her previous two historicals. Rather dual voices counter Clara's first person narrative: the societal newspaper praising the merits of lavish debutantes in an elite column and the Tattler: a sort of 19th Century tabloid. Both provide an interesting counterbalance to Clara's perspective and offer an enlightening and time-specific lens.


Mitchell's evangelism is again subdued. The great theme of sacrifice and undconditional love in Love's Pursuit is replaced by the message of Christianity through hymns: referred to as Clara's mother's "theology." A personal passion of mine, I was delighted that so many stanzas were interwoven throughout the story.

While I applaud Mitchell's ability to appeal to a secular readership with a subtle gospel, I found this an almost cloaked representation of Christian fiction: working more as a good, moral tale rather than an explicit gospel message. As such, I found it lacked the emotional punch of Lynn Austin's novels or even Love's Pursuit.

Nonetheless, Mitchell is a brilliant writer and this story, as always, is excessively readable.

I cannot wait to read more of her work!


Many thanks to Bethany House for the review copy

[ on a slightly more superficial note, I adored the romantic lead in the story and a certain scene involving a rare and valued copy of Byron and a pressed bunch of pansies... read for yourself!]
Posted by Rachel at Friday, April 23, 2010 No comments: