In honour of Hallowe'en I give you: the new grail


Lately, the biggest trend has been to write about the Grail, The Templars, the Codes and other boring stuff- cum-Dan Brown that makes me want to just yell "Watch 'Last Crusade' you friggin' morons!!!!"

Yet, this trend....like so many.... seems to be passe. It is no longer "in", ducks. To be in the innest of "in" crowds you have to be one step ahead of the times. Grail is SOOO done.

My RIP challenge post mortem post is dedicated to the one book on my list that has spurned the most attention of late: Bram Stoker's Vamp extravaganza.


I give you Dracula..... based ( loosely? ) on the horrificest of horrors, the darkest prince of all, that Transylvanian monstrosity, Vlad Dracula ( devil ) aka Guy who Stuck People on Poles while eating dinner out on the front porch of his castle aka Guy who feasted on the flesh and blood of his many victims in a strange masochistic eucharist/tryst aka..... okay, well, erm, you get the point!


I give you proof:

The Historian by Elizabeth Kostova

Exhibit A: really long, ranting puzzle novel with far too many narrative points of view we renamed " The Dracula Code"


My Swordhand is Singing by Marcus Sedgwick

The Secret Life of Lazlo, Count Dracula by Roderick Ascombe

Exhibit C: Drac is a hot womanizing vamp who sucks lots of blood and kisses half the population .... the kiss of death mwahhhaaaahaaa !

More about the order of the dragon and lots of occultish stuff. Yum

And where else do we see threads of it? Buffy, the vampire slayer, slash Morticia posts about in her blog, Vampire Hunter D, and the latest teen blockbuster phenomenon Twilight by Stephenie Meyer ( the sequel New Moon has werewolfs and vamps deking it out.... boo ya ! )

As for Bram Stoker's original Dracula it creeped the hell out of me. And yet, there was some perverse eroticism streaming through it that was somewhat unexpected. The pale necks of Lucy and the sweet Mina, the heaving bosoms, the dark man creeping through the window with his thin, aescetic lips and drooping moustache and aquiline profile. Did I mention the heaving bosoms?! I was startled by its sexuality. And , moreso, how gawdawfully boring it got in the center bits with the long diary entries and notes and the travel time. Good lord, Jonathan Harker, how long were you on that bloody train?!?!

Raise your hand if you can get Hugh Jackman in a turtleneck out of your head?!

The Obsidian Dagger by Catherine Webb

The Turn of the Screw by Henry James ( not his best short work.... try Beast in the Jungle )

The Thirteenth Tale by Diane Setterfield

The Naming of the Dead by Ian Rankin


I was shocked that, as a stern and steadfast 19th Century fanatic! I had never read Dracula or Frankenstein before this Hallowe'en.....odd.


I cannot wait for Carl V to post something Christmas-y for the next challenge.
Posted by Rachel at Tuesday, October 31, 2006 5 comments:

we interrupt my over-active imagination....

I would be posting about the books I have read lately, but I am too busy watching the new BBC adaptation of Jane Eyre for the fifth time this weekend.
Posted by Rachel at Sunday, October 29, 2006 2 comments:


Shelf Life: My year in a bookstore---Shea


The Masque of the Black Tulip---Lauren Willig


The Meaning of Night---Michael Cox

La! Catherine Webb is the greatest thing to hit YA fiction since... since....

The Obsidian Dagger is like chocolate, nay, it's like Christmas.... it's like chocolate and Christmas and everything sparkly all wrapped up with a shiny red bow. It makes me giddy just thinking about how splendid it is.


If you have not read The Extraordinary and Unusual Adventures of Horatio Lyle and hold even the slightest interest in the world of incomparable YA fiction, please indulge now. They should hand this stuff out at workshops. It's delightful. Ingenious. Brilliant.
It deserves every droplet of hyperbole I bestow upon it.... and all the expressive italics I can muster besides.

Her writing has so improved in Obsidian ( a very worthy sequel ). These things are worth reading for the sheer bliss of the language, the smart turn of phrase, the interesting connection and allusions.... and of course, of course of course the dialogue.... that pitch perfect repartee......


I squint and squeal and bubble over. Like the first of this thoroughly fantastic series, I know I will end this and go straight to the beginning. A straight-away re-read is as savoury as the first time.

This kid's nineteen NINETEEN for the love of god.... and already she is one of the most creative and imaginative writers in her market.


I want to compare her to Doyle, to Jonathan Stroud, with a shot of Gorey and a sprinkle of Dr. Who.


She is a wonderful amalgamation.

I will report back once I have finished this darling book... that I am stretching and stretching it out....

And after, well, I am a reader on a committee for a popular Canadian literary award and I have been given the first six of a proposed 55 novels to read before its conclusion.

Step right over Stuart McLean, you're next on my list.

A very happy, bookwormy weekend to you all.

As for the Hallowe'en challenge, the Turn of the Screw lingers never far from reach.
Posted by Rachel at Friday, October 13, 2006 No comments:

Absolutely no effort whatsoever went into the production of this... 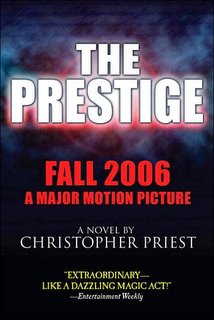 Ladies and Gents, this is now what constitutes as a book cover:


God in heaven, I thought it was an ARC ... Fantastic book; terrible cover.

I mean who wants to pass up on a normal tie-in edition, especially when the film boasts such easy-on-the-eye actors as Christian Bale and Hugh Jackman.


Secrets from the Vinyl Cafe by the always excellent, Stuart McLean


The Constant Princess by Philippa Gregory ( okay, not classic literature, but so romantic and atmospheric and fun....and, most importantly, a quick read ).


Fairest by Gail Carson Levine ( I think her best in the past couple of years. I loved Dave at Night as well. It was my token YA novel of the week. As Ella Enchanted took a new angle at the Cinderella fable, so Fairest peeks into another more realistic side of Snow White. Loved Ijiro, the Prince ----but I also loved Char (of Ella Enchanted ) especially as personified by Hugh Dancy in the film version).


Will read more but it is a holiday weekend, ducks, and I am busy living a social cornucopia of festive fun.
Posted by Rachel at Monday, October 09, 2006 1 comment:

I have read a ton recently, but have not been blogging about it. Bad me.

Kit's Law
Downhill Chance ---- Donna Morrissey ( by the way, Donna Morrisey is one of the most captivating authors I have discovered of late. We all know my passion for East Coast literature. It is well-founded here, I assure you ).

The Other Boleyn Girl -- Philippa Gregory ( I needed to read a token Gregory novel and it looks like I picked the right one. Dishy and fast paced, it reads well in first person. Not a masterpiece by any stretch, but a nice dollop of gossip from the court. In actuality, it just further drove the idea that women were all commodities and sexual pawns in the Tudor Court but, heck, they got to wear really pretty clothes ).


Angus, Thongs and Full-Frontal Snogging -- Louise Rennison. ( Bridget Jones for kids. It was my YA read of the week ).


Darcy's Story by Janet Aylmer ( Shut up! I know. You don't need to tell me. This is pathetic, really it is. But I love Mr. Darcy and I always promised myself I would read one Austen pastiche in my life....well, there it is. And I enjoyed it and got giggly and spit herbal tea out a couple of times ).
Posted by Rachel at Tuesday, October 03, 2006 3 comments: