In which I was in Chicago

So, I have been rather silent on the blog: but with good reason.

My galleys for A Lesson in Love and Murder were due and I have been feverishly working on The White Feather Murders.


I did, however, get to steal away to Chicago for the latter half of last week.

I arrived on Wednesday after a bit of a gong show of a trip over there. We left Toronto early in the morning, arrived in Chicago, couldn't land because of fog, circled and circled about and finally returned to Toronto.

I spent most of the day in the Porter lounge at Billy Bishop writing White Feather. When I finally did get to Chicago I was excited to see all of the sites that I hadn't seen in two years since my last trip there ( especially because I had written A Lesson in Love and Murder  during the interim --- about 80 per cent of that book is set in Chicago).

My friend Sonja ( from Vancouver Island) joined me and we stayed at the W City Centre Hotel. It was fab: like this psychadelic disco castle.

We took a long ramble about and I gaped up at the amazing architecture and found dinner at Pizano's on State Street.  Score for us, it was half-off bottles of chianti.


The next day, I was pretty packed with all things bookish at Book Expo America.

I met the Harvest House crew for breakfast and then headed over to Book Expo at McCormick Place.   It was a zoo! I signed a few books and met a few readers and spent some time with my amazing editor.

A long day of bookish goodness later and Sonja and I were back prowling Chicago. We had dinner at the Emerald Loop and then cocktails at The Palmer House.  Note: I am obsessed with the Palmer House. It's where Jem and Merinda stay when they are in Chicago and you really, really, really must spend time there if you are in the Windy City.

Friday saw us out and exploring again....
Sonja is a professional photographer, so part of her vision for her portion of the trip was to use Chicago's gorgeous hybrid of historical and modern architecture to create a visual narrative.   Because she had a friend ( me!) along with her, I modeled for a lot of the shots.

We spent a wonderful day getting pics at the El stations and perusing Marshall Fields and the Tiffany Ceiling (now Macy's), exploring the river and shooting near the Palmer.  After work was done for the day, we headed for cocktails at the Signature Room in the John Hancock Building where we were afforded amazing views of the city.  After which, we found dinner at Quartino which is one of the best restaurants I have ever eaten at in the States. The food was amazing, the wine was amazing, the wait staff was amazing ( thanks for the free limoncello! ).   After which, we left the W behind and headed to an air bnb in Lincoln Square to spend the rest of our Chicago weekend.

A new neighbourhood and new digs ( with a gorgeous swath of print! --- I love print!) , our borrowed apartment was cozy and gave us an entirely different feel for an interesting new neighbourhood.  On Saturday morning we wandered through the square which is home to several families with small children and inched through a street festival.   Lincoln Square ( unbeknownst to me previously) is a largely German area of Chicago and it was interesting to see that cultural influence.

A quick El ride in to the city proper and we were freezing along the river thanks to a quick temperature drop. Nonetheless, we took an Architectural Tour on the river before wandering the streets again and stopping at this adorable little wine bar.    Dinner was at Bistronomic--- a to-die-for French place on Pearson Street. Thereafter, we procured tickets to Disenchanted: a Disney musical spoof reclaiming a feminine space for princesses.


Chicago is an incredible city. It reminds me a lot of Toronto. I fell for it two years ago when I visited for the annual Dickens Fellowship Conference and was very lucky to spend more time there again.
The preservation of Victorian and Edwardian architecture and the on-going beautification process (started in the early 1900s on the magnificent mile and beyond) help establish one of the most alluring historical cities in the US. 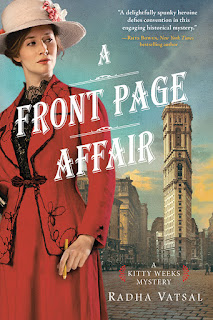 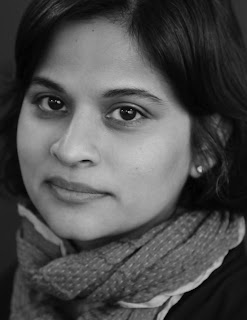 Radha Vatsal is a writer based in New York City. She was born in Mumbai, India and has a Ph.D. from the English Department at Duke University. Her debut novel, A Front Page Affair, comes out this May from Sourcebooks Landmark. You can write to her at radhavatsalauthor@gmail.com or friend her on Facebook.
Posted by Rachel at Wednesday, May 04, 2016 1 comment: