Rules:
*Contest runs Dec 1-6*
heart emoticon read a Singular and Whimsical Problem (available at all online major retailers) or pretend to read it. Whatever. You are still eligible as LONG AS YOU LEAVE AN ONLINE REVIEW
heart emoticon leave a review on Amazon, Nook, Kobo, iBooks (through Apple iTunes) ... the retailer of your choice between Dec 1-6
heart emoticon take a screenshot or capture of said review (it doesn't have to be a good review or a deep review. It could be "The Chipmunks are better sleuths")
heart emoticon send proof of your review to getrachel [at] gmail [dot] com
heart emoticon be entered in a DRAW!
heart emoticon WIN:
-a signed copy of The Bachelor Girl's Guide to Murder upon its release in March 2016
-The David's Tea Christmas Collection 2015
-a replica print of a Sidney Paget illustration from the original Sherlock Holmes serials in the The Strand Magazine
-a TV tie-in copy of "Night's Child" by Maureen Jennings featuring Toronto's best and brightest Victorian detective
-my undying love ( oh heck, kids, you had that anyways!)

Contest open to residents of Canada and the U.S. only
Winner will be announced December 8 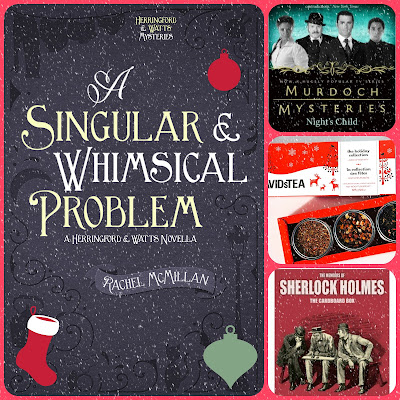 Posted by Rachel at Thursday, November 26, 2015 No comments:

Spotlight: A Talent for Trickery

I have been insanely busy of late. It's the whole "you're a writer and a career girl thing" and my reading has been sliding. As such, I haven't even finished this delightful book but I am loving it so far and I know you will, too!


Indeed, our friend Serena Chase ( who has impeccable taste) listed it as one of her must-reads on USA Today's HEA


The Lady is a Thief

Years ago, Owen Renderwell earned acclaim-and a title-for the dashing rescue of a kidnapped duchess. But only a select few knew that Scotland Yard's most famous detective was working alongside London's most infamous thief...and his criminally brilliant daughter, Charlotte Walker.

Lottie was like no other woman in Victorian England. She challenged him. She dazzled him. She questioned everything he believed and everything he was, and he has never wanted anyone more. And then he lost her.

Now a private detective on the trail of a murderer, Owen has stormed back into Lottie's life. She knows that no matter what they may pretend, he will always be a man of the law and she a criminal. Yet whenever he's near, Owen has a way of making things complicated...and long for a future that can never be theirs.

While I received a copy for review purposes from Sourcebooks, the book itself is less than the price of a gingerbread latte on kindle so snap it up.

Posted by Rachel at Wednesday, November 25, 2015 No comments:

First off,  excited that A Singular and Whimsical Problem is up for pre-order on Amazon!  It is e-only with links for kobo, nook and ibooks coming shortly. It will show up on your kindle Dec 1

it's super cheap so go forth and get it. It's just a slight little novella-sized Christmas confection but you do get to meet Jem and Merinda and Jasper and Ray!


Secondly, a bunch of awesome authors have pooled together for a cool Christmas Giveaway. You could win all of the books listed below (for me: a digital copy of Singular and Whimsical Problem and a print copy of Bachelor Girl's Guide to Murder upon its release) as well as a cozy fireplace heater. I have one in my little apartment and there is nothing better in the world!


Sending you over to Amanda Dykes' website to enter so you can check out her awesome blog and learn more about Bespoke: A Tiny Christmas Tale--- one of my favourite reads of last year )

Theatre Thursday: 3 Reasons why 'The Proposal/The Night Was Alive' from 'Titanic' is the smartest duet in the Broadway canon

Last night, Kat sent me this amazing youtube performance ( I mean everything is perfect: the piano accompaniment, the voices, the duet)  and it had me (again) thinking about how much I love the musical 'Titanic.'   I repeat, this show has nothing to do with the stupid movie and it has one of the most moving and ingenious broadway scores I have ever heard.

I saw it 3 times in Toronto this past Spring and saw James Hume ( one of the fellows here, singing the part of Bride) as Etches. His voice is magnificent.


You also really need to hear the song with full orchestration,


Here's why this song leapt into my top 3 broadway songs of all time when I first heard it:

1   1.) It is an interesting and unexpected duet: composer and lyricist  Maury Yeston said that he divided the story into groups of three ---2.) three love stories from across the classes b.) the builder, the owner and the captain of the ship c.) three men who knew that something was amiss:   Barrett the stoker knows that the speed they are going is ridiculous, Fleet, the lookout, has no binoculars and no moon to guide him, Bride cannot get ahold of anyone when he sends his SOS signal.   Unlike other popular male duets in the Broadway canon (think of Confrontation in Les Miserables), this doesn’t drive the plot forward in a blatant way, rather serves as a portentous moment threaded with melancholic music and positioned in a somewhat humorous moment.

2.)The tune is at once wistful and whimsical( an almost impossible counterbalance) and excessively listenable: layering an interesting counterpart of foreshadow and temporary bond.   It uses its funny onomatopoeia but its undercut by a severe melancholy: most apparent in the orchestration which occasionally sits high and yearning octave above the musical line Bride is singing. The telegram that Barrett sends to his love ( inspired by a real one ) will be his last connection to her while the thousand voices that Bride relies on to assuage his feelings of loneliness will be silent when he needs them most and then transposed, at the end, to exemplify the football stadium of wails as passengers drowned.

3.) It follows a song of major exposition ( a dinner table sequence that posits information on the date and the speed of the ship )where most people might put a love duet:  Any other composer would have used this moment, I think, to focus on young Katie and Jim Farrell: a typical musical theatre love story. Instead, Yeston gives the second class married couple a duet ( in another interview he said that this is merely because the spoken dialogue he had for them was not loud enough to cover the sound of a mechanical elevator needed in the original stage production) and the Isidor and Ida Strauss a duet. Neither is predictable. In this moment, he tells a different love story: Bride loves his friggin telegraph and Barrett years for Darlene.  Most of the romance duets are interspersed into large, layered chorus numbers
Posted by Rachel at Thursday, November 12, 2015 No comments:

Oh fair blog, I have deserted you.

But, I did want to touch base about my amazing Broadway weekend.  What is a broadway weekend, you might ask?  Well, it’s when you go to New York City ,stay at a hotel just off Times Square and see a bunch of theatre.

My friends and I met in NYC on a Friday morning. Went to the Strand bookstore and then commenced a theatre weekend.

Tosca at the MET on Saturday afternoon, the King and I at the Lincoln Centre Saturday night

The great thing about this weekend was that the theatre was varied!  An opera, 2 off-broadway shows presented in intimate spaces and two big budget musicals.

And what about these shows?

Amazing Grace is a passion project  and as a long time student of hymnody and the history of the great hymnists it was a must see for me. It was closing weekend for the show and the cast was had some of the best voices I have ever heard on stage.   While the story of John Newton is a fabulous subject, I couldn’t help but think that the musical would’ve been even better had it had a more competent score and stronger lyrics.  The staging ( including one impressive shipwreck scene ) transported you back to 18th Century England.   A nod to the musical’s focus on Mary Catlett who really is in a wonderful and unexpected way, the heart of the story.

Tosca was an exercise in marathon singing featuring some of the world’s most renowned operatic voices.  Puccini is all romance: swooping and sighing and long recitatives and the MET auditorium and its almost ethereal acoustics was the perfect house for this epic exercise in song.  While opera is not my favourite medium, I loved the experience.

The King and I had some of the best staging I have ever seen for a musical.  As Anna and her young son arrive in 19th Century Siam, their boat steers a clear path, overtaking the stage and covering the orchestra pit underneath. The dancing, singing, choreography and magnificently buoyant and intelligent Kelli O’Hara gave this classic musical a modern and feminist slant.  I really appreciated seeing it anew.

Daddy Long Legs was my favourite show of the weekend.  It is a chamber musical playing off-broadway and based very closely on the epistolary novel by Jean Webster. I was familiar with the concept recording which I have been listening to non-stop and was delighted to hear that most of the music had been preserved in the broadway production.  A cast recording featuring the actor and actress we saw will release next week.   It is just a perfect musical. Basically tailor-made for Rachel.  Sweet and scholarly with dollops of literary infusion and a really careful and smart romance. I loved the writer heroine and the kuntsleroman sentiments and I loved the clever way they interwove Jervis’ reactions to her beguiling letters.   This musical is a kind, small world of its own with fantastic singing, perfect staging, a charming book-filled set and nuanced humour.  It really is the coziest cashmere way to spend an afternoon at the theatre.

The Fantasticks was a show that everyone knows and it is a staple of musical theatre but that I was pretty much unfamiliar with. A sparkling, well-sung allegory, it reminded me of the vaudevillian tropes of old: paper moons and streamers, hats and a mime, a magical trunk that provided all of the props and costumes needed to collectively imagine the myth of Pyramis and Thisbe with a sometimes mournful, always light and airy musical score.


A perfect little confection with plenty laugh-out-loud moments
Posted by Rachel at Thursday, November 05, 2015 No comments: