I LIVE IN the BEST COUNTRY in the WORLD

I LIVE IN A COUNTRY with an UNBELIEVABLY COMMUNAL SPIRIT

I LIVE IN A COUNTRY THAT SUPPORTS IT'S ATHLETES ---whether they win or not!

I LIVE IN A COUNTRY WHERE an UNPRECEDENTED 18-1 in WOMEN'S HOCKEY INSPIRES A SPONTANEOUS ROUND OF APPLAUSE TO THE OPPOSING TEAM!

I LIVE IN A COUNTRY WHO THROWS AN OPENING CEREMONIES in a DAZZLINGLY humbling and TONGUE-in-CHEEK way....

we can make fun of ourselves and THAT --- on top of our class, our sportsmanship, our quiet but exceedingly important role on the world stage---- is the key to our brilliance...

not only do we have the BEST literature and music, a gripping history, an amazing future and a wonderful spirit--- we have more OLYMPIC WINTER GAMES GOLD MEDALS than ANY OTHER COUNTRY EVER

CANADIANS --- keep the pride. The ball is rolling, the momentum is building... let's be loud and proud EVERY DAY OF OUR LIVES!

Blogging through Foyle's War: with Rachel and Jess

So, Foyle's War isn't really a book ---- but who cares because it is written by Anthony Horowitz who is brilliant AND it gives you the same experience as reading a really thoughtful and complex novel because it is a fabulous and engaging character piece. Perhaps, I would say, some of the best writing in television. EVER.
So, Jess and I are coupling our insane infatuation with the show from a.) a fangirly, giddy standpoint b.) a reverence for wonderful writing, characters and mood and pulling them together in one conversation.

We are both simultaneously watching from the beginning of the series and chatting afterward ( note: Jess lives in Colorado and I live in Toronto )


There is SO much in this episode--- it almost makes my brain explode. It is a pivotal episode in the series; sets the mood and setting of the show and establishes all sorts of character background and relationships.


It is marvelous. Anthony Horowitz says in an interview that he always writes like the rings of a tree. I find this fascinating and every carefully plotted, well-executed, overlapping story line is proof of his genius in this method. For instance, you know that every plot thread in Foyle is somehow going to connect: whether overtly, or slowly knitting together.

I really want to start The German Woman with a few key notes of the beginning of the series:
First, I think it is very interesting that the series begins with a pastoral shot: beautiful, lush England, a picnic setting, two people having a wonderfully romantic time, the camera panning and then, at the last, the shot of the barb wire trapping them into this world we will soon learns as Hastings and this war that we will soon see all contained ( with a few exceptions) in this community and suddenly all idealism is shot. It’s rather fabulous. I also think that we should draw our attention to the relevance of the title and its dichotomy: there are two German women in the story line and one could argue both were murdered: one in the traditional “revenge”-type plot --- with direct criminal intent; the other as a result of the harrowing prospect of internment—a woman victim of horrible circumstances. Both murder, in a sense, just in different ways.

Next, I enjoy how the series begins with our lead character wanting out of his surrounding. The main premise of the story is DCS Foyle’s work as a policeman in a world overthrown with chaos ….. the detective story begins with the detective wanting out of his surrounding and, ironically, wanting to do more for the war effort.Interestingly, after that introduction to Foyle and his world, we will see the series unfolding with Foyle being a very important part of the war effort---- just in a slightly different way. What he does in the micro-world of Hastings often ends up effecting the macro-world of England and the war.


Jess: Wow. I'm not sure what else to add to that incredibly insightful introduction to the series. I guess I'll just have to go personal, rather than academic.
What always strikes me deepest about this series is how thoroughly they set up life in WWII England. Just how everyday people lived during the war. Not the soldiers, but the soldiers' families back home. All the fear and prejudice and hope and opportunism andkindness and struggle wrapped in surviving, in waiting to see if your country would be invaded, if your loved one would come home, if your rations would hold out.


To your point about there being two German women, that's kind of true. The second, the woman in the internment camp, is actually English. But because she's married to a German, she gets treated as though she wereGerman. She married the "enemy" (even though he's a refugee who fled Germany), thus she is the enemy.


Rachel: and we’re going to tip our cap at two very special guest stars: Rosamund Pike and James McAvoy and that guy from Our Mutual Friend who plays the murderer and whose real name I might never know. We are also going to take one moment for Sam Stewart who is just about the most adorable thing to ever walk the face of the earth. Finally, I would like to have a moment for Foyle’s countenance when he learns Andrew is going to war and then ANOTHER moment for their shared laughter over the perfect trout (isn’t it perfect that Foyle’s pastime is fly fishing: so classical and harmonious---so HIM!) and then another moment for the smile that turns into distress as soon as Andrew’s back turns out the door. Any other moments, Jess, before we move on?


Jess: The introduction of Milner and his perfect eyebrows definitely deserves a moment. Also deserving of a very long, reverent moment? His super sexy shadowed jaw the first couple times we see him in the hospital. I don't think we ever see it again, but day-amn Milner, that was nice.
Also related to Milner, the way the episode lays the groundwork for his troubled marriage by mentioned how his wife has only come to see him once since he returned to Hastings, and how his relationship with Foyle begins - Foyle gives Milner exactly what he needs to pull himself out of his PTSD depression but does in a way that is neither coddling nor hard. He simply, straightforwardly tells Milner he needs a sergeant and does Milner want the job, yes or no? Milner proves he is actually good at this police thing, and the dynamic detecting duo is born.


Again more about Milner, because apparently I am his champion today. I love that the show uses his relationship with his wife to show what so many soldiers probably went through up on returning home. Couples got married in a hurry before they shipped off, before they really knew each other. And then, when the man comes home, broken by war - physically and/or emotionally - suddenly both parties realize how little they know each other, how little they have in common, how little they've really invested in this relationship they're now stuck in. I can't imagine how common Milner's situation was. (Note: This does not excuse his wife for being so incredibly awful that I am overcome with the desire to punch her every time she's on screen. She's so horrible to him.)

Rachel: Let’s tie this up then with two summarizing thoughts:


--Everyone hates Milner’s wife
--Anthony Howell has the least boring eyebrows I have ever seen.
Like Foyle? Jump in our conversation!
Stay tuned for A Lesson in Murder when Blogging Through Foyle with Rachel and Jess RETURNS
Posted by Rachel at Thursday, February 25, 2010 1 comment: 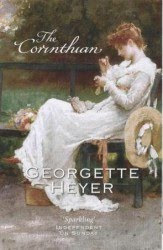 The Corinthian by Georgette Heyer

Blogging For Books: Beneath A Southern Sky ( Deborah Raney)

NOW THIS is a fun blog tour! A grab bag of goodies from the Value Fiction WaterBrook is promoting to help us through bleak March days!

Beneath a Southern Sky by Deborah Raney – Daria Camfield is expecting her first child when her husband Nate is reported dead on the mission field. Devastated, she returns to the States and soon marries again. But two years later Nate is found alive in the jungle. How can Daria possibly choose between he two men who love her?

My take:
Beneath a Southern Sky by Deborah Raney is a contemporary romance featuring a headstrong woman faced with the most difficult dilemma of her life: new love with the man she has married having been widowed in Columbia or renewed love with the man she initially married, long thought dead, who has suddenly come back to life.

The harrowing opening chapter preludes Daria’s difficulty and ropes you in to find out whom she will chose, how, and what life journeys she will learn along the way.


Deborah Raney is a prolific Christian writer whose Vow to Cherish was adapted into an acclaimed made-for-tv movie. Her grasp of human emotions and her longing to portray the complexities of the human heart is quite pronounced here.

Raney also shakes the usual Christian fiction conception of love: something sought after, found and tied up nicely with a ribbon. Instead, love is found in a very unexpected way and coupled with a sacrifice of immeasurable proportion that will shake all characters with its ramifications for years.

A tightly plotted and deftly-woven yarn outside of the genres I usually read in the Christian industry. Thanks to our friends at WaterBrook for passing this along

I recommend finding a copy quickly--- especially because WaterBrook has such fabulous bargain fiction up for grabs!
Posted by Rachel at Thursday, February 25, 2010 No comments:

These Old Shades is one of Georgette Heyer’s classics. It is a wonderful, romping, rollicking plot of mixed identities and melodrama and girls dressed as boys and love slowly blossoming and cravats and conspiracies and oh! la! ...all things gloriously regency.

The Duke of Avon, Justin Alistair, is often called Satanas by the elite members of the ton: he has known so many women, has conquested so many conquests, blah! Blah! Has a good hand at cards, cares nothing for no one and drowns in his nonchalance. But one night while wandering the streets of Paris he saves a street urchin from the abuse of his older brother.

Avon sweeps the kid from the streets and adopts him as his page. Leon, with his pale skin and reddish curls becomes quite the favourite of society. For who knew Avon to be so charitable with those unfortunate?

Turns out, Leon is actually the adorable French creature Leonine who may or may not be the illegitimate child of someone very significant in Avon’s past.

He’s twenty years older than she; she has lovely hi-jinks and adorable broken English; she worships the ground he walks on and has sworn her devotion for life; he thinks she should be set up with his rapscallion brother Rupert … and… oh yes! There is a KIDNAPPING


So much fun! And so much fun to cast. Casting Georgette Heyer today we’re going to have to toss the role of Avon to our friend Richard Armitage.