The 1981 BBC adaptation of Great Expectations looks exactly like you would expect a 1981 BBC adaptation of Great Expectations to look like: (meaning, we are completely devoid of production values, I think we forgot to remove that mic. from in front of the camera lens and I don’t think it looks very period appropriate dangling there; but, we cannot afford to fix it because we spent ALL of our money on sideburns with double-sided tape on the back so that our actors who, still surprisingly look like they live in 1981, have an aura of authenticity). The sets are bad; the lighting is bad; it looks far more like someone held up a camcorder ( a 1980s one, at that ) to a staged version of GE and went to town.


But I harbour some affection for it because a.) it doesn’t have a malicious bone in its body--- it is trying so earnestly hard and b.) uber-fidelity: if you want scene-by-scene, line-by-line to be funneled straight from the book to the small screen then, dudes, this is where it’s AT.

A few years back, the BBC released boxed sets of all sub-production-par  albeit faithful literary installments of the day and if you have seen the grainily lit, meandering Pride and Prejudice or even Silas Marner (oh Ben Kingsley) or even ADAM BEDE with chick that played Jane in the BBC Pride and Prej (1995) then you know what you are in for.

I have often noted that while adaptations of GE I have seen hit on one or two notes really well, no adaptation thus far (I am holding out hope, 2012! Don’t let me down!) captures the entire spirit or essence of the book. We don’t have a pitch-perfect medium-switch here.
Instead, This one touches a few points well:
Herbert Pocket and Pip’s relationship---this is often sacrificed a lot in in the interest of screen time; but this series goes on for friggin’ ever and so it has hours to draw this out--- and it does. Up to Pip going to Wemmick to try and sneak some of his Magwitch-fortune to his roommate/bestie.
[There are some awkward hugs when Pip and Herbert tentatively part --- and some weird crying--- and then Herbert awkwardly hugs Clara and weirdly cries some more--- ]
Bromance for the WIN

Joe Gargery’s Wisdom--- Joe is the salt of the earth and he is packed full of some of the sagest Dickensian lines in the world. Like, stuff about not lying because you’ll be crooked and some of us are blacksmiths and some of us goldsmiths and never the twain shall meet and what is betwixt friends, old chap, what larks ! ( heftily paraphrased: see source material )--- all these little nuggets are here and uttered with integrity-on-speed. This Joe is just a little too happy to be doing everything and is almost too good to be true ( you don’t see the dark, pained edges) but hell, he means well and he does actually say all of these lines….and he doesn’t know what to do with his hat when he goes to London and it is as FRIGGIN awkward as in the book ---made more awkward still by the bad production values and everyone’s sideburns…larks, kids, larks indeed!

The Estella Ending: Readers, remember the end of Villette and how frustratingly ambiguous it is and how half the team are (with Charlotte’s father) on the “NO! that cannot be right! What the heck you stupid shipwreck!” ship and the other half of the team is like, “Dude, he’s so friggin’ dead—but that’s okay because Lucy has independence and a cot of her own”? Well, Dickens did the same thing with the interchangeable, dvd -special- feature- alternate- ending to Pip and Estella’s “love” story. The series does this well.


This edition is so, so very cheesy; but it is trying so, so hard--- for hours—and hours---it might take less time to read the book.But, jiminy crickets! I am a-fond of it, y’all. It tries so hard to be nice and good ...
And WORD BY WORD it recounts every stupid, friggin’ line. 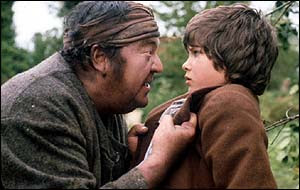 I am willing to bet you can find some of this on youtube, if you are so inclined
Posted by Rachel at Wednesday, August 31, 2011

I applaud you for your dedication to GE, and for making a 1980s BBC adaptation sound entertaining -- because I honestly don't think I could make it through this one. ;)

I'm baffled because there is a copy of this on Youtube but it has thirteen episodes, two of which have the caption "Episode Two" in the opening titles. And all the episodes are different and have different cast lists in the closing credits, so it's not just a duplicate on Youtube. See for yourself: http://www.youtube.com/playlist?list=PLfPiogYhirble-ts3Fw4ExzjDlC6WFR09