Scout, Atticus and Boo: A Celebration of Fifty Years of To Kill a Mockingbird by Mary McDonagh Murphy 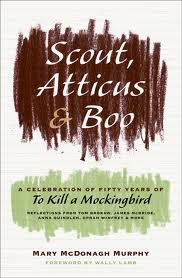 Scout, Atticus and Boo is the perfect companion piece to the celebration of To Kill A Mockingbird’s 50th Anniversary.

( including Tom Brokaw and Oprah Winfrey ), authors ( including Wally Lamb and Scott Turow ), actors ( the young lady who played Scout in the exceptional 1961 film version) and locals of Monroeville Alabama ( such as Nelle Harper’s minister).

Everyone spoke to the meaning of the book in their lives and determinedly reiterated its importance as one of the most ground-breaking and influential books ever published.

The interviews conducted were exposed in such a natural and conversational tone, I felt like I was sitting in a circle of chairs at a book club. Of course, most lovers of the book championed one of the characters: Scout, the irrepressible Tomboy; Atticus, the emblem of all that is morally right in a crooked society and Boo Radley, the enigmatic “other” whose personal convictions mirror the very heart of the novel’s ethical core.

From the brilliantly embroidered prose of the opening scenes, through Scout’s childhood vernacular, through the painting of one of the most intensely-realized court scenes in literature, each interviewee expressed the novel’s indelible stamp on their lives.

Those, like myself, who are particularly hungry for more about the novel’s elusive author will snatch at the fleeting snippets of her life she keeps so well-hidden. Speculations are made on why she never published a subsequent novel after penning a masterpiece and those who know her personally were quick to evade any judgments regarding her reclusive nature. Instead, Nelle Harper is painted as a humble and spicy woman who avoids the limelight merely because she stepped into it long enough to have her say and stepped out of it when she knew her words had reached the world.

To Kill a Mockingbird remains one of the most poignant and influential books to inform my literary “upbringing.” I first read it at 14 and have read it every subsequent year since.

Oft thought of for its major themes and statements regarding Civil Liberties, Equality and Racism ( I capitalize them because they are so integral to this work), the novel remains, for a writer and reader, an exposition in simple yet gloriously well-settled prose.

To Kill a Mockingbird, I learned, is not just a world that I can (and often do ) crawl into ---- not just a place, ramshackled and old that I can peek in and explore at the snap of a page. No, it is a world for everyone: no matter race, colour or creed. The universal plight of humanity, the natural instinct for goodness and conscience is reclaimed every time someone rambles imaginatively into 1930s Maycomb.

I felt, having turned the last page of Scout, Atticus and Boo somewhat validated. My crazy love for this book is well-founded! Readers of all walks of life walk away having been met with different experiences---- but vital and important experiences nonetheless.

This reminds me that I really need to read To Kill a Mockingbird! Sometimes I read books of this nature without reading the original, but not this time. :)