Incoherent ramblings about the BBC Sherlock: Part 1 A Study in Pink 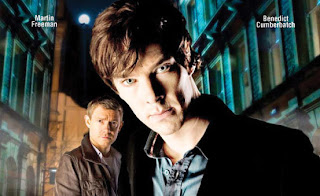 DISCLAIMER: this is just me rambling on and on and on....
The BBC Sherlock is the greatest thing to ever happen to the world. Seriously.
The absolute best thing to ever happen to the world.
So, to begin on what may just turn out to be the best and most complete rendition of the canon since Jeremy Brett, I really should take us episode-by-episode.
First off, if I have not alluded to this before, I am a massive SH fan. I have been since I was in grade 9 and read Silver Blaze for a class assignment ( followed by every subsequent short story and novel ---56 of one, 4 of the other )
So, this massive SH fan was very uber excited to see how the genius behind  Dr. Who would give a modern adaptation of Sherlock treatment.
I have always thought that SH could easily be transplanted into the 21st Century because his brilliant mind is not exclusive to Victorian sensibility and his methods and deduction are so precise they could easily take a sharp-shooter approach to modern crime. Holmes’ fascination with forensics and his ability to observe what others have merely seen are certainly not century-specific. With this deduction --- not agnostic to time--- he could easily apply his genius to modern day London. Moreover, the characters and specifically the relationship between Watson and Holmes is what is so lasting about the series. 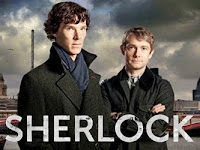 A Study in Pink, the first of the three part series, is a wonderful re-imagining of the first story introducing Holmes and Watson. It first appeared in serial format in Beeton’s Christmas Annual and propelled the characters into almost instantaneous fame. The most pivotal moment of the story is when Stamford introduces Watson to Holmes after determining that each is looking for a flat mate.
This immortal scene, set in St. Bart’s Hospital, has even been commemorated in London with an historic plaque. The meeting is here modernized; but its exposition is almost exactly the same.
Set up: Watson, having returned from the modern conflict in Afghanistan, has been suffering from a psychosomatic limp and seeing a therapist who attempts to work through his trust issues and wean him away from his horrific experiences by encouraging him to keep a blog. This, for narrator ( or Boswell ) Watson, is a stroke of genius in the modern adaptation. Watson is given an introduction as a writer and a perfect platform to relay his adventures with Sherlock. He runs into an old colleague and expresses the state of his dwindling army pension ( see: original ). Stamford introduces him to Sherlock who immediately observes his military bearing and his need to go “snacks” ( that’s Conan Doyle terminology ) on a flat in Baker Street.
Sherlock is introduced staring interestingly at a cadaver which he subsequently takes a riding crop to in hopes of highlighting bruising which would crack a case. This is, of course, barbaric way to meet someone and certainly not Inspector Barnaby but it is wholly canonical and thus alright with me.
The visuals in the series and the representation of Sherlock’s genius are very well married to the modern feel of the production. For example, when Sherlock is explaining how he knew so much about Watson on first observation, there is a freeze-framed flashback of what Sherlock saw on Watson’s physiognomy and on his phone ( rather like the moment he deduced that Watson’s brother was a drunk in the Adventures). Watson is, of course, thoroughly impressed and their relationship established.
As in the series, Sherlock is always flattered and surprised when Watson compliments him. The canon recites him “blushing like a school girl” when Watson or Lestrade praised his methods: offering a funny counterpoint to the often arrogant attitude he displays.
The mystery itself is intriguing as it presents a puzzle of seeming murder-suicides, the key being a lady in pink who breaks the trend of all previous victims. As in A Study in Scarlet, it appears as if she was writing the word “RACHE…” on the floor before she expired.
Watson and Sherlock attempt to crack the code while pitting themselves up against a maniac who almost outsmarts Sherlock. In the end, Sherlock’s willingness to risk his life to prove himself clever is a resonating theme.
The appearance of Mycroft ( here noticeably smaller in size ) is just as poignant and wonderful as in the book.
“ I just met a friend of yours”,he explains. Sherlock, having no friends, is absolutely baffled. As soon as Watson responds with “An enemy” Sherlock immediately says” which one?”
Another favourite moment establishes the reticence of the police to work with Holmes. While Lestrade certainly summons him when they are out of their depth, his team, as is the case in the novels, is not so willing to oblige.
Anderson, a forensics expert calls Holmes a psychopath to which Holmes replies: “I’m not a psychopath! I’m a functioning socio-path. Do your research.”
Posted by Rachel at Wednesday, September 01, 2010