The Jewel Box by Anna Davis 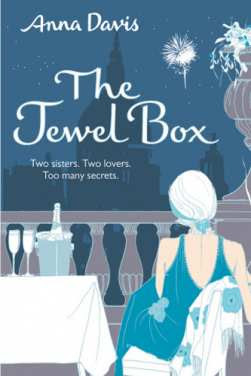 The Jewel Box by Anna Davis has been my subway book the past week. I picked it up on a whim at the Reference Library in the Browse section while I was picking up other holds.

It’s not that great--- but it is perfect for the subway.

In the morning while I am sitting, half-awake, I need something light and that doesn’t require a lot of thought: this was the right book.

It was unremarkable but amusing.

In real life, Diamond is Grace Rutherford: a smart if somewhat dourly introspective publicist who lives with her sister, niece and nephew and her mother and yearns for the past.

When Dexter O’Connell, famed, prize-winning American novelist arrives on the scene and awakens elements of the past, Grace and her sister are forced to confront secrets that they have holed silently for years.

I really enjoyed the setting as I have rarely read books set in 1920s London.The love triangle between Grace, Dexter and neighbour John Cramer was a tad redundant but, I suppose, did move the strain on the sister’s relationship to a well-established breaking point.

While I enjoyed the insertion of Grace’s “Diamond Sharp” columns and respected Davis’ handle of the lingo of the age, I couldn’t help but feel something was missing. Some spark or sense of passion.

It all played out very paint-by-numbers. That being said, it was a good pick for wiling subway hours away. Davis mentions in an afterward that the likes of Zelda and Scott Fitzgerald and Ernest Hemingway inspired the lush and lavish landscape of her gilded tale. This book left me with a hankering to revisit the real thing.

A book set in 1920s London would be great, but I am not sure if this book sounds like something I would like otherwise...