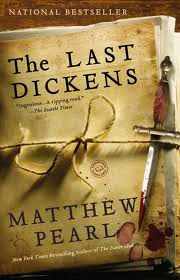 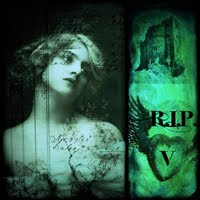 The Last Dickens by Matthew Pearl was a spontaneous addition to my RIP Challenge reading… and a perfect choice.

I am very interested in Dickens. Thus, I was excited to dive into Pearl’s novel about the shady circumstances surrounding Dickens' untimely death and the mysteries unsolved regarding the unfinished manuscript of The Mystery of Edwin Drood.

Drawing on figures fictional and historical and even Charles Dickens himself, Pearl weaves a splendidly theatrical and at times chilling and horrific yarn about one of the world’s most famous writers and one of literature’s greatest mysteries.

The chapters devoted to the past and, in particular, to Dickens' reading tour of the States are as compelling as those unraveling in present time. While in Boston last year, I was delighted to trace snippets of Dickens throughout the gorgeous historical city and those interested in how massive book events came to pass in the 19th Century will be really intrigued. Also, it was well known that Dickens devoted himself to largely theatrical unveilings of some of his larger-than-life characters ( imagine women swooning as he retold the gruesome butchery of Nancy at the hands of the evil Bill Sykes in Oliver Twist). Pearl’s research on this subject and on Dickens’ literary tour are sublime.

Publishing aficionados will be in heaven with Pearl’s exposition of the trade and especially of Bookaneers: book pirates who would steal into readings, take jot notes and re-sell the material overheard in cheap abridged versions thus completely obliterating the strict ethical code dueling publishers held sacred. I also very much enjoyed reading about the transportation of manuscripts from England for serial publication in the States: a high-stakes game, publishers would have to sneakily pick up the goods whilst stingy and wily bookaneers kept evil watch on the sidelines. It is here that The Last Dickens begins. Publisher James Osgood is horrified to learn that the trusted clerk, Daniel Sand, he sent on a mission to retrieve the last existing installment of Drood before Dickens’ death, has been run down by a cart in the street. The police prove that Daniel Sand was under the influence of opium at the time and while Osgood and Daniel’s sister Rebecca find this highly uncharacteristic, the missing piece of the Drood puzzle requires a trip to England and into a dark and sinister web of characters, plots and deeds.

The Last Dickens splits its time equally between Boston, London and India. The novel (especially the portions in India) focuses greatly on the Opium Trade ( see: Opening Chapters of Edwin Drood ) and Dickens’ son Frank’s military service (Canadians should note that Francis Dickens also served time as a Northwest Mounted Policeman and can read of his adventures in Dickens of the Mounted).

There are some really chilling moments: in an opium den, revisiting a gruesome Boston murder and a tale in a graveyard involving a father whose missing son’s bones rained down upon his head from a hidden roof compartment. The scenes at Dickens’ writing cottage in Gadswill are splendidly atmospheric and the premonitory events following Dickens’ Staplehurst train incident ( a pivotal moment in the author’s life and in the book) are just about as climactic and heart-stopping as one will find in suspense fiction.

The elements of theatricality permeating the tale expose themselves in eerie and grotesque ways: especially when characterized by a female stalker who forces Dickens to read her manuscript aloud in a tragic and darkly humorous scene and by the elusive Dick Datchery---- a sinister and mentally unbalanced figure who claims that since Dickens hypnotized him he has been reincarnated as one of the colourful characters from The Mystery of Edwin Drood.

This novel is very rich and very suspenseful. While there is more than a healthy dollop of history ( especially literary history ) interwoven, it is an engaging read. Pearl certainly understands even the minutiae of the time period and his characters, including Charles Dickens, leap off the page. The dialogue is wonderful and every slight happenstance is rendered with the greatest assertion of verisimilitude. It is one of the best written books I have read in a stint.

I was absolutely smitten.

Thanks Rachel! I'm so glad you enjoyed it and very appreciative that you'd share your thoughts with others. I'm especially glad you enjoyed the subplot of the bookaneers... I plan to write a novel devoted to one bookaneer in particular, and a kind of ultimate literary quest for a lost book. Thanks again for being a reader...

I have had this book forever and still haven't read it. I am glad you liked it and hopefully I can get to it someday!