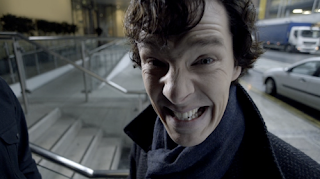 First. Read this article because I seriously like it.

Here we are in the second installment of the series and after the teaser involving some ceramic tea pots we cut to Watson who is trying to figure out how to use one of those automatic Grocery check-out machines. Cue a bit of domestic tension as Watson arrives home to Baker Street and he and Sherlock have a spat about who should be in charge of groceries, Sherlock should go to the bank…etc., etc., So they GO to the bank and there is much deduction to be had because a former schoolmate of Sherlock’s points him to ciphers that have been painted over two refined portraits in the upper class bank.So Sherlock deduces and scopes things out and his brilliant coat ( which has had much attention here and here ) flutters against the sleek London backdrop and Watson is just brilliant and there are MYSTERIES! And CIPHERS! And CHINESE CIRCUSES and ACROBATS getting through windows.


....ANNNNND! SHERLOCK ALMOST GETS STRANGLED!
....And WATSON gets a date.
....All is very well as the two run about decoding things and being altogether swell. 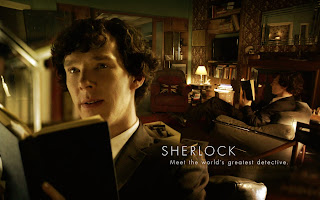 
Several sources have noted that this is probably the weakest of the three instalments and I would agree. But, it is only weak in comparison to how dazzling the book-end episodes are. Compared to other telly it is simply marvelous.If I am ever in a tight spot, I want Martin Freeman to bail me out.Their domestic spats are charming and the relationship is slowly, and brilliantly, developing. I sort of missed Lestrade in this episode because I am a big fan and his casting, as with the rest of the series, is perfect.You want some Moriarty?---- whispered against the backdrop like a gothic sigh? You got him.


So hugs all around( and a double hug to Benedict Cumberbatch because that guy rocks my socks in this role! )
Posted by Rachel at Friday, September 03, 2010

That was an awesome article! And I absolutely agree with your point about Lestrade. Brilliantly cast...as they all are. Especially Sherlock. Whoo boy.

Thank you for this nice article!
I completely agree with your opinion - this BBC Sherlock is fantastic!
The actors are incredible good, really all of them, but the best are Benedict Cumberbatch and Martin Freeman - they're such a good team -WOW-