Okay, I can’t help myself. I have seen all four series (as televised thus far); but I just can’t quite Merlin.
This doesn’t mean I necessarily want to go back and watch more (near the end it almost killed me it was SO REPETITIVE and silly); but it is so enjoyable that I missed blogging about it and watching Colin Morgan smile at things.
So,
THE LAST DRAGONLORD
Opening: CAMELOT
Merlin has set free THE DRAGON VOICED BY JOHN HURT and there is MUCH pandemonium throughout Camelot as the DRAGON VOICED BY JOHN HURT takes revenge on Uther for forbidding magic and chaining him in the bowels of the dungeon and so on and so forth. 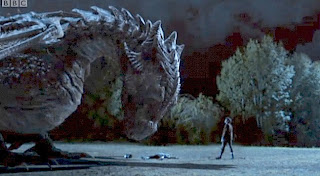 DRAGON VOICED BY JOHN HURT: *breathes a lot of fire and propels a lot of destruction*
ARTHUR: OH NO! Dragon terror. Whatever shall we do?
UTHER PENDRAGON (looks like Rupert Giles): KILL ALL MAGICIANS
GAIUS: My Lord, I think we need a Dragonlord
UTHER PENDRAGON(looks like Rupert Giles): this is obviously the work of Magic. KILL EVERYBODY. Also, I think I KILLED all the dragonlords because they were MAGIC and in case you haven’t heard, I HATE MAGIC as will my son and heir after I am gone when he is King so watch out, magicians. I hope there are NO magicians here in the castle at all … because that, well…. that would just be dramatic foreshadowing!
MERLIN: *whistles and looks sheepishly away*


Meanwhile, back at Gaius’ house:
Merlin: Arthur and I are gonna go look for help with the dragon problem
Gaius: fortuitous! I know of a dragonlord.
Merlin: I thought they were dead. All of them!
Gaius: no! there is one left. I helped him escape under Uther’s dastardly purge of magicians. His name is Balinor. He will be played by John Lynch. Also, he is your father.
Merlin: WHAAAT???????


Arthur is ASLEEP
John Lynch: I am grumbly and my hair is long and straggy and oily because I have left the world to hide my dragonlord abilities in shame. I don’t want to help Uther. I hope the dragon destroys Camelot because I am bitter. Though, I am bitter, I have very compassionately soulful eyes, rather like a young warlock with prominent ears who shall remain nameless.
Merlin: I thought you would help us! Gaius said you would help us! I am so disappointed *does not tell Balinor he is his son. Just mopes*
John Lynch: Fine! I’m over being bitter. I will help you.

--John Lynch, Arthur and Merlin leave the CAVE and head back towards Camelot through the forest


It is NIGHT, they make camp:


Arthur is ASLEEP
Merlin: By the way, John Lynch, I am Merlin. I am your son.
John Lynch: WHAT? That’s COOL! I am now more ridiculously fond of you than I was before. Look, your ears!
Merlin: Will you teach me how to tame dragons and stuff? I have magic? See? *is all bright-eyed with endearing boyish WONDERMENT and ACCEPTANCE*
John Lynch: Go to sleep. I will carve you a dragon out of driftwood
Merlin: OK! Meanwhile, it is MORNING and ARTHUR wakes up and HENCEFORTH will NOT SHUT up and will interrupt EVERY DRAMATICALLY TENSE AND EMOTIONALLY MOVING MOMENT with his PROPENSITY to NOT SHUT UP.


Arthur: PRAT
Merlin: I think we are being intercepted by baddies in the forest. That NEVER happens in this show! Look, they come out of NOWHERE!
John Lynch: Merlin, Look out!


*dives in front of an ARROW and DIES!*

MEANWHILE, BACK at the CASTLE:
Arthur: The last dragonlord is dead so I am gonna take some knights out there and END THIS!

Merlin: sniff…
Uther Pendragon (looks like Rupert Giles) That’s too bad. But, he got what he deserved, stupid magician
Merlin: sniff

MEANWHILE, back at GAIUS’ house
Gaius: So you see, Merlin, conveniently your dragonlord powers are inherited from your father---passed down from son to son…. And, though I never mentioned any of this before because the lore never really fit into the plotlines in the first two series, you are only dragonlord when your father is dead. And, it appears your father is dead. So, go out and get the dragon.
﻿ ﻿

--The Knights of Camelot and Arthur and Merlin go forth to DEFEAT THE DRAGON
Dragon Voiced by John Hurt: GRRRROWL!
Arthur: is knocked unconscious as, conveniently, are ALL THE OTHERS except for MERLIN…
Merlin: *in angry latin-like chant* I am now a dragon! Look, I am tearing because I am so EMOTIONALLY INVESTED IN THIS ROLE and because MY FATHER just DIED And I CAN FEEL HIM WITH ME rather like SIMBA CAN FEEL MUFASA when he is DEFEATING SCAR.
Dragon Voiced by John Hurt: I will do your bidding, young warlock/dragonmaster
Merlin: Go away and leave Camelot alone!
﻿ ﻿
Dragon Voiced by John Hurt: I guess!
Arthur wakes up and WILL NOT SHUT UP
Merlin: you slayed (slew?) the dragon, Arthur. You are a hero!
Arthur*clueless*:AWESOME

Your Merlin recaps are priceless...I hope there are more in the future. :)