The Rose of Winslow Street by Elizabeth Camden

While reading the Rose of Winslow Street I was reminded of Dickens’ Bleak House and of The Apothecary’s Daughter by Julie Klassen. 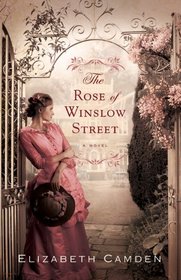 Stay with me here: the former because it involves a piece of property that two parties desperately want and lay claim to and a strong-willed legal battle: the latter because Liberty Sawyer’s investment and knowledge of botany rivals The Apothecary’s Daughter regency-infused methods of pharmaceuticals.  A stronger offering than Camden’s inaugural novel, TheLady of Bolton Hill, Camden has applied her penchant for strong research and bold, non-flowery writing to write of the struggles and triumphs of a young Romanian immigrant and his two sons and a young woman whose lifelong shame of illiteracy has forced her to build an invisible wall. It will take a crisis of faith and the unravelling of years of secrets to bring these two together and sever the barrier between them.

I was impressed by this novel on two fronts: the first in Camden’s natural flow and ease of storytelling and her insertion of knowledge without infusing a sense of overladen fact-dropping; secondly by the slow and easy and quite believable depth of characterization: from initial remonstrance through kind and gentle understanding.  Camden paints quite a different portrait in the trials and travails of Michael Dobrescu, the swarthy strapping ex-soldier, his two sons and his compatriots. Moreover, she dallies with the fragments that will sew together the larger revelation, pulling the reader along with finesse.  She is a fine storyteller and her strong talent and ease of verisimilitude helps stretch a bright canvas of late 19th Century New England life.

I really enjoyed her attention to historical detail: from the flow with which she expels descriptions of botany and the perfumes and illustrations of soaps of the day, to a monumental eclipse, through the prejudicial slighting of Michael and his family and more still to the over-arching legal battle over ownership of the house on Winslow Street. There is also dichotomy to the eponymous rose and readers will soon grasp the many symbolic inferences of the flower to the characters and their growth.

Buy it at Amazon

Visit Elizabeth Camden on the web
Posted by Rachel at Thursday, February 23, 2012