Today is the first day that Allison and I are going to be providing you with the best of the best and the worst and worst-best Christmas movie fare.

Every good gift and every perfect gift is from above, and cometh down from the Father of lights, with whom is no variableness, neither shadow of turning. James 1:17

For me, the ultimate Christmas classic is a film that has been appropriated by the season. Long in the public domain, a film that had not specifically been made for Christmas is a beacon of remembrance for many.  One of hope, second chances, a Dickensian flare for a visiting angel and a sweet, resonating love story.  Indeed, its Dickensian tropes: from a small village adorned with the Christmas emblems made popular in the Victorian age to the snatching, creeping Scrooge-like Potter are easy for fans of the great British author to see.  Unfortunately, unlike Scrooge’s tale, Potter is left without redemption (horrible old spider that he is).  But fear not, for redemption is nigh and borne of sacrifice. Here, when George Bailey gives up his dreams of traveling the world and shaking the dust of Bedford Falls off his boots; when George and Mary disperse of their honeymoon money when there is a raid on the bank, when George steps up to Mr Potter in the stead of his absent-minded Uncle Billy who has lost the deposit.

I cannot even write of these moments without tearing up.

A love story not just between George Bailey and the sweet-faced Mary Hatch (Donna Reed) but a love story between George and Mr. Gower, the druggist overcome with grief at his son’s loss,  and George and the memory of his father,  George and Bedford Falls, the town he gives up everything for, George and his Uncle Billy, George and his brother Harry whom he rescues, sacrificing his hearing and risking his life .  To wit, it is also a love story between a community post-war and post-depression that needs something to believe in.  Some optimism subversive to the long-stretching clutches of the wily Mr. Potter.

It’s a Wonderful Life advocates thanksgiving and redemption and grace. But it also asserts a perfectly plotted narrative emblemizing the web that we spin and the lives that we touch.   For writers, this expert plotting and perfect characterization allow us to fall so deeply into Bedford Falls' spell that at the end, as George runs through the snowy Main Street unaccustomed to being treated as a stranger, so we, too, are surprised that our new friends are not embracing them. We know Nick Martini, we know Mary. We know George's mother. We know Annie the housekeeper. We know them all. We have seen them through George's eyes and subsequently have embraced them as he has. 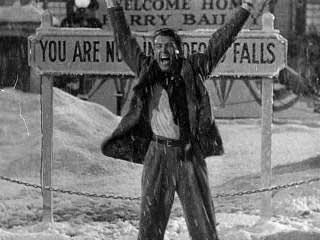 It also is expert in symbolism and technique. Consider George's family business: helping families build the homes that will become the foundations of the Christmas hearth gatherings and traditions so brilliantly evoked in the film's iconic closing scene.

As a child I was taught that even those things not specifically crafted with Christian resonance, if good and pure, could be yet another emblem of the Maker’s craftsmanship and there is so much of the divine in It’s A Wonderful Life. More than the hokey “Every time a bell rings…” line that my brother Jared mocks every year; but ingrained in its stronger thematic resonance.

Share redemption, sacrifice and grace.  Harken back to a time when idealism reined supreme and Capra-esque optimism patched up a nation late of War.

(and get all this goodness and light out of your system, ‘cause the Lifetime and Hallmark fare shall soon rear it’s wonderfully ugly head! )
Posted by Rachel at Monday, December 01, 2014

For me, THE moment in the movie that just kills me..."I don't care about plastics, or ground floors...oh, Mary! Mary!" on the phone. I can't even breathe through that scene.

So excited about this series!

Do you need a loan to consolidate your debt? Do you need a loan to finance or expand your business? Or for the purchase of cars, the purchase of a house and other personal loans ETC we give you a long term loan of five to fifty years maximum with an interest of 3%. You are 100% guaranteed. Contact us through the email address: ( directloancash@gmail.com )....or WhatsApp ( +14154837688 ).

Assalamu'alaikum , Do you need a financial loan help with at 2% interest rate? Our loan ranges from $3,000.00 for more information Contact Us abdullahibrahimlender@gmail.com
whatspp Number +918929490461
Mr Abdullah