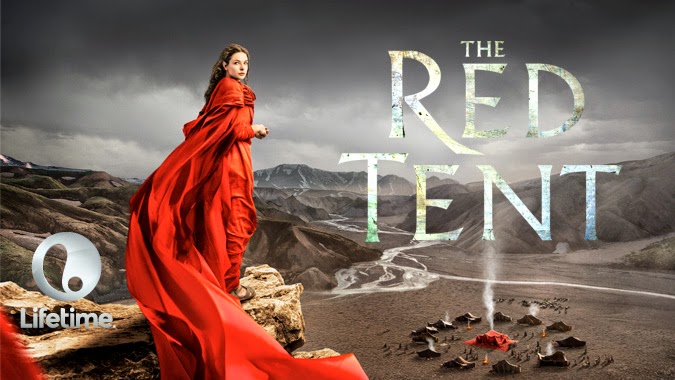 When I was in University I read The Red Tent and I loved it. I didn’t think of it as harmful. I didn’t think of it as revisionist. Rather, I thought of it as embellishing a slight snippet of scripture whose weight allotted for speculation and research. If you think about it, Biblical fiction does a lot to embroider and embellish and for the most part we embrace it. Probably my favourite Biblically themed novels of all time Ben-Hur and The Thief (by Stephanie Landsem) use Christ as a peripheral character whose essence is the center. Nonetheless, we assume Him into the life of characters that are highly fictitious. My favourite Old Testament re-telling “In the Field of Grace” by Tessa Afshar does the same with the Ruth and Boaz story, planting fictional seeds that allow the eventual coming of Christ to inhabit the pages.

Also in University, not long after reading the Red Tent, I attended a weekend of seminars designed to look at the Bible merely as a great piece of literature. For this, I set my faith and my pre-conceived notions aside, immersing myself instead in the beauty of translation ---from the Hebrew and Greek, through the Latin Vulgate and finally to the King James and the numerous translations we are familiar with today. From structure ( prose, as in the Message) and modernization (the NIV) ,we recognize that this is a tome that has undergone a lot of sieving and a lot of filtering. For me, what is important, is that the general message stays the same. The authenticity is in the feeling. The feeling is in interpreting it with the guidance of a Higher Power. The Bible is one book that is borne of relationship, of study and of personal conviction. That being said, like any other story I read and love, I look for the essence of truth and the intent when I visit interpretations of the story.


I revisited the Red Tent in its Lifetime incarnation and was, again, completely compelled by this embellishment of the Biblical tale. It didn’t change my set opinions on the story, it didn’t threaten my faith, it didn’t offend me. Rather, it seemed to make a lot of sense. Anita Diamant painstakingly researched the world of the women of Jacob’s tribe and here she inserts her own ideas and plausible event sequences to colour in the patriarchal lines. To add, it is just a gorgeous filmed and heart-wrenching story of family, of love, of suffering and of a woman strong enough to overcome injustice while still doing good to those around her.


The Red Tent is the eponymous name given the place where women during their monthly cycles and confinement and childbirth would retreat. Diamant admits there is no factual evidence for such a structure in the Biblical tale; but she makes a convincing argument that it was often a custom of many Middle Eastern cultures of ancient times and knowing that women in both natural areas were viewed as unclean as per later Leviticus law, makes a lot of sense. It is here that we are guided first and foremost to meet sisters Rachel and Leah and their handmaids Bilhah and Zilpah.


Jacob, as in the Biblical tale known to most, arrives to aid the farmer Laban and falls immediately in love with his beautiful daughter Rachel. Unlike in the Biblical story familiar to us, Rachel, scared of the act of love on their marriage night, forces Leah to wed in her stead with a veil covering her. Jacob and Leah consummate their marriage and Jacob enters into the family. Leahs gives him several sons, as per Biblical record, and Rachel, often barren, one golden boy named Joseph. Finally, Dinah, the daughter of Jacob and Leah arrives and it is her voice and life explored.


She is raised in the sphere of women in the Red Tent and eventually becomes apprentice to her mothers (especially Rachel ) who are talented midwives. Inside the Red Tent, everything is cloistered and shrouded in feminine sphere. While Jacob is adamant his offspring follow the faith of One God, the women still pray to idols of fertility and motherhood. For Christians and religious types who are interpreting this as blasphemous, I instead assert it is quite plausible given the time period and the known obsession with idols. [ I heard some banter on the internet where people were admonishing this aspect for being “un Christian” which is, face it, a little ridiculous considering there was no Christ for which to be Christian]

I get a little perambulatory here; but I did find that the story led me to do some forward thinking as one often does in the Old Testament while anticipating the sanctity and redemption of the New.

While the story has shifted and facts have been embroidered and in some factors re-imagined, I assert that the strongest themes of the miniseries and the novel are themes that believers should applaud: themes of grace and forgiveness. Usurping thoughts of revenge with magnanimous acts of benevolence. When Dinah witnesses Jacob reconciling with his brother Esau, her mother Leah bids her to mark the moment and remember it: for ( and I paraphrase) we can measure the quality and strength of a man by his ability to forgive. Later, in Egypt, upon her deathbed, Dinah’s mother in law begs for forgiveness for her ill-treatment of Dinah and for sequestering Dinah’s son. Dinah gives forgiveness. When Joseph, at this point vizier of Egypt sentences Dinah’s son Ramos to execution for an attempt on his life, he forgives by reducing the sentence to exile and sparing his nephew. Finally, as Jacob lays dying, Dinah gives the gift of forgiveness by tending to the father she had years earlier disowned.

Blood is a major motif: the blood which brings life ( which can put believers in mind of the Cross and the ultimate act of life giving ) and the blood of the slain men in Shashem. Of sacrifice when Shalem and his King father are willing to offer the bride price of circumcision as per Jacob’s wish. Blood marring cloth otherwise perfectly spotless and white—Shalem provides Dinah with a snowy shawl on the night of their wedding which later, blood-stained, becomes reminiscent of another cloth marred with blood.


There are also wonderful moments of grace and symbols of communion. Jacob’s mother, the oracle Rebecca who—in this adaptation is attributed for Joseph’s ability with dream interpretation---is often visited by impoverished pilgrims who wait for hours in the hot sun to provide her with offering and wait to hear their fortunes. Noticing their hunger, Dinah and Rebecca’s slave girl break bread and provide it to the poor standing in line. Grace is found when Dinah risks her life to descend into the valleys of Thebes and aid the life of an abused pregnant woman at risk of her own. Dinah, too, eventually accepts her gift of midwifery and despite the prejudice afforded the “Foreign Born midwife” and her stubborn pride at the occupation’s harkening back to her tumultuous past, she casts it aside to help the women in need. Even as it takes her to the castle yet again where she will deliver (unbeknownst to her) her brother Joseph’s first son.


There are people who are automatically going to look at the two major departures from the Biblical story ( here, Dinah is not raped inspiring her brother’s bloody revenge, rather she falls in love with the prince and marries without her father’s consent and Rachel and Leah not being ordered by Laban to trade bridal places when Jacob asks for Rachel’s hand). But by just looking at the creative license here and fostering and mulling on these supposed discrepancies, they will miss the beauty of a story that is knit with grace, resilience and, ultimately, the power of forgiveness over vengeance. There are not many more Christian themes than these. Instead of attacking stories that try to present moments of goodness and light amidst the magnanimous grandeur of the Biblically historical setting, we should look at how these stories might inspire eventual readership, scholarship and study. Diamant takes departures, but she does so respectfully and the intent and the outcome, not to mention the positive changes that can be wrought from this inspiring story, are something not to scorn but to praise.
Posted by Rachel at Thursday, December 11, 2014