I have been talking with my friends Hillary and Melissa about favourite romantic movies.   We talk a lot about everything and we always want to make sure we have all seen what the others love.

Here are a few quirky movies that just touch the romantic in me in some way shape or form. To add, they might not be overtly familiar to everyone .

Princess Caraboo:  loosely based on a true story, this whimsical tale is set during the prime of the Regency---Prince Regent and everything! ---involving a stowaway pretending to be a princess (she even has her own language) adopted by an aristocratic family.  Several believe she is a fraud, though, including a reporter with lots of gumption ( I love those!) played by Stephen Rea.

Sliding Doors:  I love love love this Choose Your Own Adventure tale and its quotable lines by the inimitable John Hannah ( seen here with gorgeous Scotch accent in tow).  In one life, Helen catches the subway train, in the other she doesn't and her life intersects letting you know what each path would hold.  Romantic, daring and sweet. GREAT hero. 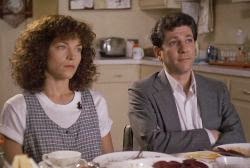 Crossing Delancey:  a recent discovery of mine thanks to a post by Susanna Kearsley on facebook.  I watched it every night when I was in Boston recently in my hotel :) You can tell immediately that the screenplay is whisked from a stage play. The dialogue is so tight. Isabella works at a bookstore and is romanced by a pretentious author. All the while a man who sells pickles has his eye on her.  When a professional matchmaker and her Bubbe attempt to set her up, she learns a lot about herself.  Just a sweet, quiet exposition on ideals met and changed.  GREAT HERO!  knows himself. Has a Knightley-esque confidence about him. 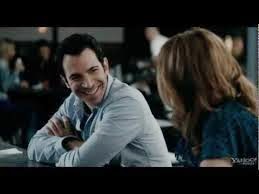 The Giant Mechanical Man:  This is one that Ruth introduced me to and I have a thing for Chris Messina in this. He is so mesmerizing.  He plays Tim a talented street performer who bonds with Janice a meek and mild unemployed woman. They both try to maze through life with late night pie, silent films and menial jobs at the local zoo.  There's a real Chaplin-esque flair to this.

The Mirror Has Two Faces: my favourite romantic comedy of all time.   Jeff Bridges plays a stalwart math professor at Columbia who places an ad for a platonic relationship based on a marriage of minds and not sex and Rose, a spinster English professor ( played by Barbra Streisand) answers.  I swear I quote this film once a day.  Its exposition on the medieval conception of Courtly Love and its beguiling exploration of two people attempting to embark on a physically passionless relationship just hits me.     Observe how  subversive it is: using romantic cliches to make its point--- down to clips of Now, Voyager and Brief Encounter and the ironic use of a swelling Marvin Hamlisch composed soundtrack.

Romantics Anonymous:  This sweet French confection focuses on two people with severe social anxiety disorders who find love  over their shared passion for chocolate.  It is almost awkwardly painful to watch at times; but resilient and exhilarating at others.

Cluny Brown: long time favourite classic of mine adapted from the equally quirky novel by Margery Sharp by director Ernst Lubitsch. It more than has his famous touch.   Cluny is a plumber's daughter who ends up at the prestigious estate of the Carmel family as war erupts. While she sets her cap on the boring local apothecary, the visiting impoverished and daring writer Adam Belinski (CHARLES BOYER!!!!!!!) sets his sights on her.   The euphemisms and innuendo are a mile a minute.
Posted by Rachel at Wednesday, December 03, 2014

What a fun list. I've been meaning to try something with Chris Messina. He's so dreamy to me.

I LOVE Sliding Doors btw. It's an old fav.

I love that message at the end. The what will be will be.

I love your list. You've introduced me to some brand new-to-me ones.
And just because I list them on my FB page, doesn't mean their my top ones.
I have a 'rewatch' list of rom coms, which I'm assuming these are from your rewatch list.