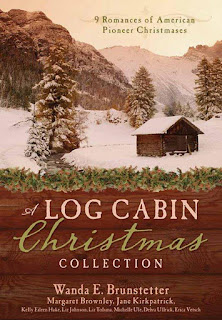 I will let you discover the magic and sentiment of each short story on your own; but I wanted to highlight my two favourite stories!:

I confess to purchasing the book to read Liz Johnson's A Star in the Night: a romantic glimpse into Confederate Territory during the War Between the States. Here, a wounded Union officer is caught behind enemy lines, fearful for his life while silently and subtly falling for his unlikely nurse, Cora Sinclair. Jedediah Harrington proves a brave and gentlemanly match for the spirited Cora and the picturesque unfurling of their budding romance in a small wintry cabin is a cozy treat.  I was impressed with Johnson's historical knowledge and the way she effortless painted the Tennessee terrain of the latter 19th Century. Her passion for this sect of history is apparent and this short story is quite a unique offering when countered with the Love Inspired Suspense novels she has published and their modern, action-filled drama and intrigue.

I found myself caught in the clutches of suspense more than once as Jed decides to endanger himself by setting out into the cold, leaving his vulnerable helpers, Cora and her grandfather. Indeed, I was kept waiting an entire year before a Christmas as special as the first they spent together in the confines of their cozy cabin brings these two love birds together again.  For a strong heroine, exceptional knowledge of US Civil War history and of the realistic portrayal of Jed's injury and subsequent healing, I rate this the highest of the stories I read. I was really impressed: especially as this story ventured from what I have read by Johnson previously.

I also quite enjoyed Snow Angel by Margaret Brownley.  I have been working through her Rocky Creek Romance series and loving the spark and bite of each.  Here, the refined schoolteacher, Maddie Parker is trapped by a snowstorm in her one room schoolhouse with her rowdy, hungry and cold students. Brusque Sheriff Brad Donovan, still aching from the death of his wife and child, is resolved to abstain from the growing attraction he feels to Miss Parker when he becomes trapped alongside her and the children on his rescue mission.  The closed and confined space their relationship grows in, and the desperate circumstances ( not unlike the setting for Star in the Night) allows for a taut and suspenseful romance where you feel heartily for each of the well-developed characters; while knowing, with succinct dramatic irony, what they feel like sharing--even when they won't say it themselves.

A cute and funny addition to each chapter features revelations about the Christmas story adorably penned by the students in Miss Parker's 1885 class.

I marvelled at how closely I grew to the characters and how quickly I was able to empathize with their circumstance and champion their budding affection for each other.  This is quite remarkable given the limited canvas Brownley had --considering the short story format.


I highly recommend this collection to any lovers of historical Christian romance.  The Christmas setting just made for some wonderful wintry reading by the tree.  It's a little too late this year; but consider adding it to your list for next December!
Posted by Rachel at Tuesday, January 03, 2012

Email ThisBlogThis!Share to TwitterShare to FacebookShare to Pinterest
Labels: barbour