Steven Spielberg is admittedly passionate about the work and scope of director David Lean. Lean, my favourite film director, had a way of poetically surging his cinematic canvas with epic light, moving pictorial narration and the perfect marriage of music to sequence and silence to render thought.
Spielberg's latest, War Horse, is like Lean's masterpieces in its epic artistic scope. It is an overtly sentimental movie and self-conscious of this fact. From the swelling music playing over the riveting farm landscape of Edwardian England and a cozy, cobblestoned village seen from high overhead to the closing scenes where a blood red sky shadows a lone rider and a tearful reunion, this is a movie best watched by those who love epics that play in traditional form.  There is nothing new or modern or bold about this film; outside of the resources to perfectly capture the Great War with cinematic precision and a heart-stopping look. That, friends, is the base of its charm.

Spielberg's latest endeavour in War Horse marries a perfectly realized episodic script (based on the best-selling and well-loved novel by Michael Morpurgo) with cinematography that will take your breath away. His earlier war effort in Saving Private Ryan did little for me. While I appreciated the first moments and the brutal horror of his realistic battle sequence, I found the story to feel rather like American propaganda; rather than a perfect picture of life for the Allies on the frontline. Here, in the Great War, he does better at adding a universal feel (well generated in his gripping series, Band of Brothers). While War Horse certainly services the British experience on the home and front lines, it does well to incorporate moments of humanity behind enemy lines.
From the time the horse of the title is born, young Albert Narracott is beguiled by him. When his father, a Devon farmer, purchases him to spite his haughty landlord, Albert agrees to train him and turn him into a plough-horse whose efforts will save his family's endangered farm.  The horse, which Albert calls Joey, is a wonderful and miraculous creature who quickly learns at the patient and loving hand of his new boy master.  When destitute to pay the rent, Albert's father sells him to the British cavalry. Heart-broken and too young to join at the start of the 1914 conflict, Albert watches as the kind-hearted Capt. Nicholls leads Joey into action on the warfront.
Through his time in conflict, Joey sees the devastation of war around him, influences two young German brothers who are brought to quick trial on treason, is housed by a kindly French farmer and his spirited grand-daughter, is used to pull heavy artillery for the Germans and finally makes it between the lines: to No Man's Land where a heart-stopping moment between both forces results in Joey being rescued from barbed-wire which entraps him.
The spellbinding and emotional fervour which drives the insistent Albert to his horse's side once more is nothing short of heart-breaking.
War Horse is a tale as old as time: that of a bond between a boy and his animal. This bond is unbreakable and it will take more than a World War to sever it.
As mentioned, the script does well at playing both sides of the conflict with tender appreciation. Even while the German side is negated for harsh treatment of horses, there is a willing private who yearns to secure the safety of the beautiful animals.  The scene aforementioned which sees a young soldier from the British side, Colin, meet Pieter, a German soldier in the middle of No Man's Land to rescue Joey from his barbed-wire bondage is the most powerful in the film.  Horses don't take sides.  In fact, at one point, mention is made of the French carrier pigeons who are highly skilled at flying above the disaster to take messages to the other side. In the same way, the horses help by carrying wounded from the field and providing the officers with a well-needed bond as they make their way into the fray.  Horses were trained to run away from conflict and here they are positioned to propel it  with devastating results.
There is some emotional manipulation at the hands of composer John Williams: whose melodramatic score swells at scenes you are aware you should be moved by. However, most of the emotional resonance of the story comes from the friendship between Joey and Albert and how both need each other on the farm and on the warfront.
This is a remarkably moving story based on a remarkably moving book. I look forward to seeing the stage production when it starts in Toronto very soon. 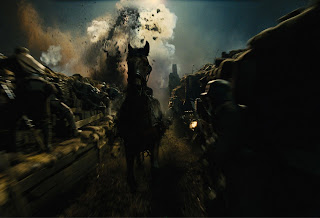 Note: prospective readers should know that the main perspective of the novel is seen from Joey's viewpoint. While the film does well at showing Joey as he moves from episode to conflicting episode, it does do well at adding a human element not just seen from the limited perspective of the horse.... worth a read.
Posted by Rachel at Thursday, January 05, 2012

You are so in love with Benedict Cumberbatch.

I want to see this movie but haven't made it yet...

I hope to see the stage version someday -- I really want to see how this plays out in that medium!