William Henry is a Fine Name by Cathy Gohlke


“Right is right, and wrong is wrong, and a body ain’t got no business doing wrong when he ain’t ignorant and knows better.”  Mark Twain The Adventures of Huckleberry Finn 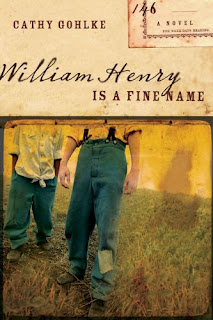 Indeed, after finishing Promise Me This and knowing that I would immediately want to read the rest of Cathy Gohlke’s work, I had no idea that William Henry was a YA novel. I bought it on amazon and started reading and it was only doing research after ( and learning that it had won the Christy Award in the YA category) that I learned of its true origin.

Regardless of this categorization and regardless of whether or not you read Christian fiction, this is a book that transcends labels.  The Christianity ingrained in the story is very much done in the subtle mode of conscience. In fact, it won’t seem any more saturated than the undercurrents of the new Lincoln film or the moral compass guiding Huck Finn down the river with Jim in The Adventures of Huckleberry Finn.

It is with Huck Finn that I want to begin.  Mark Twain’s work is rightfully renowned and Huck’s voice and dialogue and the entire vernacular and timbre of the piece are pitch-perfect.  You seep back a hundred years or so to the murky Mississippi.  Within the FIRST page of William Henry I was put in mind of Twain’s magnum opus. It gallops forth in full speed, keeping the pages turning, with the prelude to Robert Leslie’s story very much like a lot of 13 year old protagonists: a colourful tapestry of southern days lounging by fishing holes and scurrying home for supper.  Robert’s best friend in the whole world is William Henry. Though William Henry is black and this is mid-1800’s Southern United States,  William Henry is treated remarkably well for a plantation worker of the era.  Mr. Heath and the kindly Miz Lara, overseeing the beautiful plantation Laurelea, freed all of the slaves, hiring them as paid workers who are treated with a sense of equality and dignity.  Robert informs us very early in his narrative that he had no idea that slavery was such a dismal and degrading thing having only seen the periphery of his own plantation upbringing.

William Henry, however, keeps a part of his life secret from Robert.  Robert’s father and William Henry’s father are both involved in something that requires a lot of late-night working, lantern swinging and coaches with false bottoms.  It will take a further plunge into the narrative and into Robert’s memoirs to reveal that Robert lives in the midst of the workings of the Underground Railroad.

To give a swift and necessary contrast to the rather idyllic childhood days of Laurelea, Robert and his set-in-her-Southern-ways mother set off to visit Ashland: the plantation owned by Robert’s grandfather and the setting for his Ma’s upscale breeding.  There, immediately, Robert is giving a look at different face of slavery: one of poverty, cruelty and humiliation.   Under the tyranny of the overseer Mr. Slocum, the slaves are beaten, scorned and weighed under the great burden of work.  While Robert’s mother and her Cousin Albert advocate for the better treatment of the slaves’ working conditions, they fail to notice the greater turmoils wrestling in Robert’s conscience and in the consciences of so many who are opposed to human ownership.

It is at this pivotal point in the novel that Robert ---a 13 year old boy so realistic and heartwarming in his sheer believability—grows up in an up-turned world. It is also amidst the violence of Ashland (a runaway slave dies when his foot is cut off as punishment, a young boy is whipped within an inch of his life), that the book becomes jubilantly traumatic.  I coin this because while I was enjoying the vigorous reading experience, I was crying and shaking at the sheer inhumanity wrought before me in fictional form. I would promise myself to read just a chapter before bed; but spend long into the night thinking about what I read and, in short, a very emotional wreck.

Whilst battling with his inner demons and his moral awakening at Ashland, Robert is given the opportunity to choose between two worlds: a world that his conscience dictates as right, and the opportunity to inherit the grand plantation owned by his grandfather.  It takes a mulatto boy named Jeremiah, fathered by his grandfather when he rapes a young slave as punishment and the slow and steady words of a visit preaching (the aptly named Rev. Goforth) to set Robert’s spiritual and moral changes into swift motion.

I won’t talk any more to the plot. It will rip your heart out and keep your pulse quickened through its deftly executed suspense; but I do want to speak to how brilliant the exposition of its greater themes is.  Robert is never given vocal direction on how to act.  He is sometimes encouraged, sometimes hedged at: but his decisions and how is life will play out---torn between his Mother’s love and her backward(but inherited )views and the world of his father and his upstanding help at the Underground Railroad---are his own.  Goforth speaks to how everyone has a turning point in life that will define who they are in the future; and without ever prodding Robert in an outright and vocal manner, he inspires such a change in Robert’s spiritual make-up that you will be moved and inspired simultaneously.

The people in our life, it would seem, act as points of a compass; but it is up to us to decide our direction---catapulted further by our own spiritual awakenings, our restless consciences and our understanding of the Higher Power who holds the ultimate distinction between black and white, right and wrong.

This is a REMARKABLE book and so literary.  If you read one book this season or pick one book to put under a tree for a book lover such as I, choose this one.  It is EXCEPTIONAL.