A romantic friend of mine recently got married. She’s a kindred spirit in the truest sense of the word. One of those girls, like most of us, who set up our castles on fluffy clouds and dream, with high standards, of the man we will eventually marry. She, like me… like so many of us, had it all worked out in her head in perfect connect-the-dots fashion since childhood.

The man she married: who swept her off her feet and whom she is ridiculously happy with--- was not that ideal. At all. Rather, he was far more perfect for her than her imaginative trajectory could have foreseen.

Whenever I talk about ideals, the constructs that shape we imaginative sorts from the rest of normal humanity, I note that I am usually speaking to women who, like me, were very much shaped by the tales of LM Montgomery.  There is nothing LM Montgomery does if not instill in one an absolute early-founded penchant for romance.  It’s unlike any other romance  you will read about or experience in your head, her romance.  It does wonders for your psyche and your imaginative constructs: mostly because these yarns are read in the formative years where it is absolutely essential for you to identify with her spirited heroines.

The women I know who don’t share a passion for Montgomery somehow evaded her in childhood: when the purple prose, the wistful, whimsical lanes that spun to coloured,  christened homesteads, the long glances and the high-spirited “high faluting mumbo jumbo” ( to quote Kevin Sullivan’s Gilbert Blythe) were rampant in our playful imaginations.

While I wouldn’t trade my long and quite intense relationship with Montgomery…. I admit that my inability to find the same romance and happiness a lot of girls my age have found in real life has something to do with her helping me establish standards.  Not just for men: not just for her heroes and their inherent qualities [or exterior qualities---Barney Snaith’s dimples, for one, Andrew Stuart’s manner of speech, for another]; but mostly for the relationship that the heroes in her novels share with their heroines.  The preternatural kinship that strings two souls together.  It’s quite wonderful to read and re-read and read again the banter between Dean Priest, say ( not condoning him as a perfect hero; but recognizing how attractive he can be when he is at his whimsical and gnome-like best) , when he is at his best with Emily or the playful way that Valancy and Barney can read each other’s thoughts without anything being spoken.

The other night, after a text conversation with the friend listed above, I confronted this age-old idea of ideals.  I fall for them all the time. I create and construct them into something far beyond myself.  I am guilty of it as many of my ilk are.  I settled in with the Sequel to Anne of Green Gables as imagined by Sullivan.

Part of my appreciation for the Sullivan adaptation comes in the composite sketch of Morgan Harris who groups together different characters from the Anne series to create a dashing hero straight from Anne’s imagination and erstwhile conversations with Diana.  She has already explained to Gilbert and Diana what her ideal man is and she is fairly certain she won’t find him in Avonlea.  When she first encounters Morgan, she is writing on the banks of the breezy North Shore near the White Sands hotel.  Her pages flutter away as she loses herself in the language of “dark foreboding tones” and similar vernacular of her Purple Prose and it is Morgan, looking straight as if she were Pygmalion and he was constructed in physical form, who assists her.

Her second encounter with Morgan, after the Clam Bake is somewhat more typically Anne.  At this point she has confronted Gilbert for his silly school boy ways and has had to inform him that she will never feel the way about him the way he does her.  Morgan is rambling on the dark road and runs into Anne’s carriage. It is here that he is first treated with typical temperamental Anne aplomb.  He tries to be a gentleman, drips a few sarcastic lines that put one in mind of Andrew Stuart or Barney Snaith, raises a dashing eyebrow and spirits off.

She encounters Morgan again ---and for a far longer period of time – when she accepts the position at Kingsport Ladies College in New Brunswick and tutors his daughter.  Anne is taken with Morgan because he is like one of the heroes from Averil’s Atonement come to life (sans Rolling Reliable Baking Powder ).
When I express my love for Morgan ( noting that he is very much my ideal: an older man with experience, a dark past, a penchant for adventure---he’s a ship’s captain for God’s sake--- and a love of culture ) I am often derided by those who are passionate Gilbert fans.  What they might momentarily fail to remember through the veil of loving All Things Gil is that Morgan was very much Anne’s perfect man, too.

Indeed, I think, and this is speaking to Sullivan’s conception of course, that the Anne of that series might definitely have accepted Morgan’s offer of marriage had she not run into Gilbert in town on a weekend for a medical conference.  It is seeing him again that prompts her to take up her writing about home and experience another spell of homesickness. She drops the “high faluting mumbo jumbo” of her romance stories and, subsequently, is able to turn her back on the pitch-perfect romantic life offered her by her supposed ideal.  Seeing an island boy and connecting him with a sprint of creativity with a nostalgic turn towards Green Gables and days of old severs any chance that Morgan Harris had of winning Anne’s love.

He’s not a dark or sinister hero, he doesn’t hurt her or impose negativity on her; in fact he might be the most important person who comes into her life. It is only when she is confronted with her ideal that she recognizes that it will never bring her happiness.  There is a flesh and blood incarnation of Anne’s lofty man who will read her  “Tennyson by firelight”; but upon his materialization, she is driven home and subsequently to Gilbert.

As much as Montgomery champions lofty ideals and purple prose and romance in all of its fleeting and fluttering forms; so does she inspire thoughtful recognition that the best romances are often found outside of the lines we sketch and trace for ourselves. 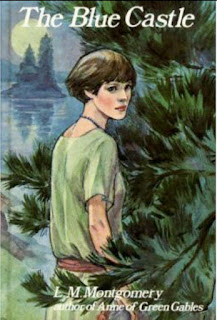 In this way, I am put in mind of the ultimate Montgomery dreamer, Valancy Stirling.  The Blue Castle is my favourite Montgomery romance because it is this very idea made manifest.  The very title speaks to Valancy’s eponymous ideal situation: a castle not unlike the Alhambra in Spain with turrets and nooks where heroes wait on her every whim and desire.  The heroes in the Blue Castle, we learn, change as Valancy gets older. At the beginning, on the morning of her 29th birthday, her hero looks very much like a man she has recently seen around Deerwood: the notorious Barney Snaith.  When circumstances inspire Valancy to propose marriage to Barney, she is made more acutely aware that her initial ideal has melded into something that this man and his life circumstance have provided. Her Blue Castle is now a Muskoka cottage, her ideal prince is now Barney.  On the morning of her hasty wedding , she thinks back to her childhood conception of marriage, of the day of her wedding: of what her dress might be, the cake, what the groom would say and how he would stand.  Instead, she has realized that her perfect happiness transcends the daydreams that so occupied her when she was relegated to a lifeless existence on Elm Street.  Just as the fateful night after she first sees Barney scrambling up from underneath his car melds the previous prince of the Blue Castle into a roguish like creature with dimples and “the look of an amused gnome”, so does Tom MacMurray’s cabin on Barney’s island become more castle than she could ever want. So does this man with a supposed reprobate past and a somewhat unconventional attractiveness become more than she ever wanted.

Montgomery’s heroines teach us to dream, to construct ideals, to build our castles in the sky; but when they are confronted with their happy ending and their perfect pairings it is often beyond their wildest dreams. My recently married friend said that she never dreamt it would feel the way it does. I guess this is what happens when you find your perfect match.  I guess it transcends these ideas and our wildest imaginations. It isn’t perfect or cookie-cutter, it is more the tingling surprise that Valancy experiences when Barney’s car breaks down in the backwoods of Muskoka after a roaring party at Chidley Corners. There, in the barrens of nowhere, with Barney sitting silently beside her, any ideal that took her far from small Ontario and to the greatest spanses of the world with the most deliciously enigmatic hero could never replace the perfect happiness she feels sitting next to that which makes her whole.

To summarize, I think that Montgomery woman should hold out for ideal because it will occur in whatever shape or way it is meant to.  It will more greatly surprise and bewilder and delight if confronted with a life of refusing to settle for anything less than pure happiness.

Love it, Rachel! It's so true, Montgomery's romances are so different from anyone else's romances, especially when they catch you at an impressionable age. :-) And they're inspiring precisely because they're more down to earth than the perfect romantic ideal.

i think a lot of it has to do with what you say, gina: catching the right reader at the right time. i was certainly impressionable when montgomery found me and she stuck :)

I'm currently watching Anne of Avonlea and was sucked into L.M Montgomery's writing at a young age. And much as I hold a candle to Gil and Teddy respectively, there's just something about Dean Priest and the televersion of Morgan Harris that appeals. Thanks for writing this lovely and poignant article. :)