Pathos and Heartbreak with a Slapstick Chaser

Today I did something I have always wanted to do: watched a ton of Charlie Chaplin films.

Face it, for one to expand their social history and cultural education, then one of the most predominant figures of the 20th century is a good place to start.  Indeed, some sources cite Chaplin as "the Tramp"  as the single most recognizable figure of the 20th Century.  Chaplin certainly followed the industry through some gargantuan times. Further, he had his thumbprint on visual storytelling from its beginning and spanning his rather remarkably long career.

To add, he is the utmost professional: independently wealthy enough to garner complete control of his art, he produced, directed, acted in, wrote and even composed the music for most of his work.  When he invested in and started United Artists, it helped him pursue creative independence and carte blanche even further.


He is a man, legend, emblem and icon borne of a society that needed him to reflect the socialism construct of a rapidly changing world.  More still, a magnet for several rumours and legends: urban and otherwise that shroud his little off-kilter bowler-hatted persona.

Did Adolf Hitler steal Chaplin's toothbrush moustache to capitalize on a beloved figure?  Did Chaplin live in poverty and horde away his wealth in trunks when his Cinderella story just began to unfold?

With an almost Dickensian background  ( complete with work house flavour ), Chaplin entered the Vaudeville scene and eventually crossed over to America. There, he maneuvered his way into an industry just beginning to boom, took hold of it, tweaked it to his own making and ran with it.

Today, as it rained outside and blustered October-like even in August, I set work and life aside and visited the past.  It started last night when I finally watched City Lights. I had always wanted to see it, being told that it was one of the greatest films ever made and I was dazzled. Moreover, I was mesmerized. You see, when the Tramp---here pursuing a blind flower girl ---interrupted by the wackiest, quirkiest adventures--- is on screen, you cannot help but be pierced by those mournful bright, expressive eyes deeply set hollow in their eye-lined orbs and you cannot help but fall prey to the malleable physicality that allows him to spurt and sprint around the screen, taking everything with him.

It is in this film I was finally able to flesh out the iconic figure with cane and hat and wilted-corsage-in-button-hole so second nature to our society.   There is something clownish to him, something mime, something graceful like Astaire, something as sombre and pathetic as Garbo and something full of distilled genius.

I recognized that the pure masterpiece in Chaplin's work--yes, in this one film---is that it was happy and sad at once. It was drenched in pathos while still skipping happily along.  The end sequence, when the wordless, nameless tramp is reunited with his cured love is heart-stopping and full of the strangest, quirkiest sense of grace.

We have come full circle, both are redeemed by love even as their social statuses now sever them from each other.

And it was in this film that I recognized I was watching history unfold.  For the Tramp, nameless, and the Flower Girl, equally nameless and all surrounding characters--rich and poor-- embodied the every-people of a changing age. 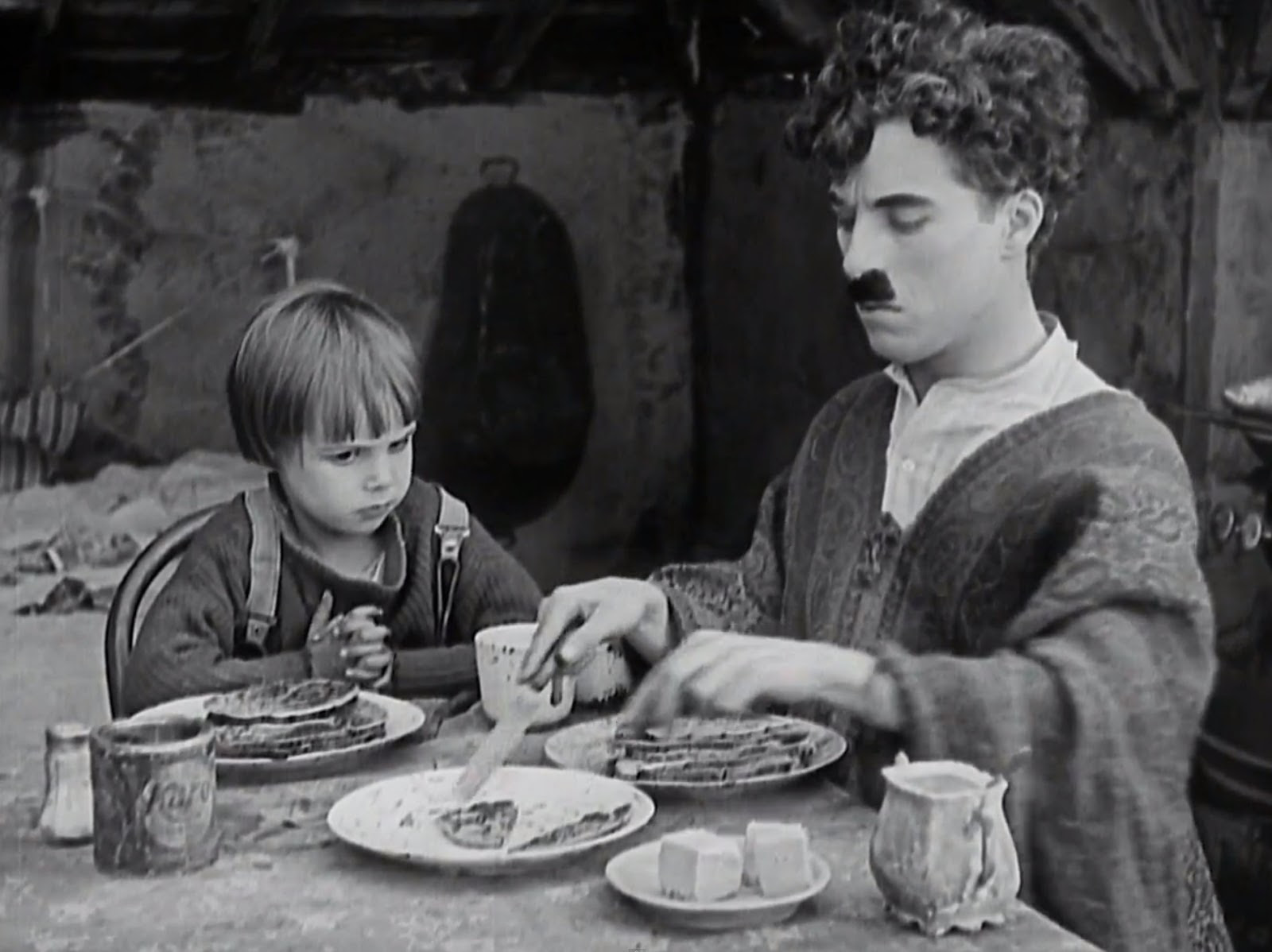 So I wound my way into the juxtaposition of forged family and statement of social equality in The Kid , framed by the resonance of Chaplin's tortured childhood.  Then, I waded through the hyper-energy of the Great Dictator startled by the resounding contrast between the buffoonish oration of the Great Dictator and the end summation by the Jewish Barber, mistaken in his identity and owning the world with his cries of democracy and happiness.  If there is better American war propaganda from 1940, I would be interested to see it.  ( and yes, I've seen the 49th Parallel).

Each title card fascinates me, indicative of the story arc but snatching at the most surprising opportunities to speak to the visual art. Each moment the Tramp ---from his earliest days in Kid Auto Races at Venice to Mabel's Strange Predicament ---twitches his nose or jerks up his elastic eyebrows held me.  This visual narrative: so foreign to our experience and relationship with films today, and yet so focused and beguiling.

I followed expression meets socialism in The Gold Rush as Modern Times swooshed broad paint strokes on the changing face of commerce ...and on film.  Not unlike the telling sequence in the Artist  when the sound of a glass hitting a table startled the audience, so hearing the Tramp sing and the hiccups of sound in Modern Times jolted me.  I had fallen into silence: the mime-like transience of a world where no one has names, and no one speaks to me--but to each other--- and I follow the muted action like someone on the sidelines peeking in.

It is something we do every day, is it not? As people watchers.  We catch small blurts of silent action and fill in the words for ourselves. We watch people in their humanity before their voices can break through. We see what we can detect and judge and feel and takeaway from their actions, their body language, the way they lean in or cross their arms straining back.

There is an acute and telling sense of humanity reverberating through all of Chaplin's films.  There are also nods to some recurring devices.  One I noted was the birdcage: seen in the Great Dictator as in City Lights and obvious and subtle oxymoron of symbol speaking to the precarious situation some of the characters find themselves in.

Not the Tramp, of course. He is of liberty. He sneaks in and out, cannot keep a job, is the apotheosis of freedom and nomadic adventure.   You cannot cage him. He is on the fringe of society, he is everyone and no one all at once. Characters cross his path and a story is born.   Strikers and revolutionaries, dictators and authorities edge near him and history is re-told.  He is part of the action, but on the outskirts of it.  He is like his strange mis-matched clothes. He never quite fits anywhere.
This sojourner, poet, romantic and jubilantly melancholy figure. So, he is for all who are just outside the lines of propriety. No wonder. No wonder he was so popular.

He takes the events of a century churning forward, plagued by war and disease and abject poverty and tweaks them into something comical.  But, the pathos is still there.


Note: you can find most of these films easily on the web in public domain and on youtube.