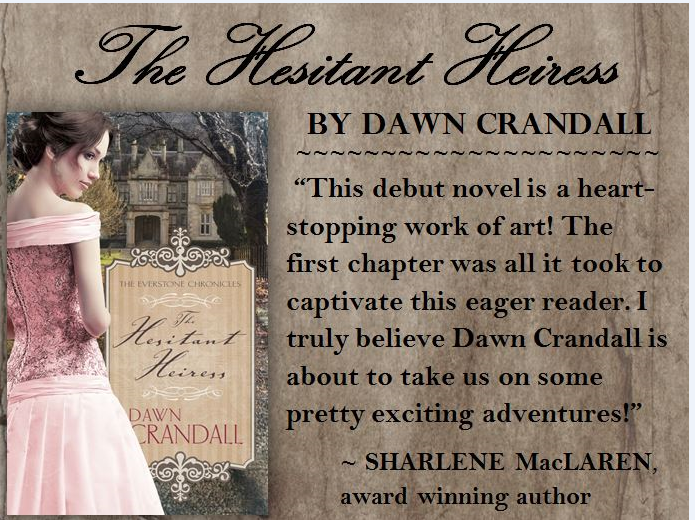 Dawn Crandall is a debut author with an absolutely adorable little boy! I love her covers and her concept and I love interacting with her on facebook.

She was kind enough to answer a few questions:

1.) What is your writing process? Do you just sit down and write chronologically? Outline? Tell us a bit about the ‘behind-the-scenes’

With this first book, The Hesitant Heiress/Amaryllis Brigham, I did not have a plan except for to have fun! That’s also why it took me two years to write it. I really didn’t know what I was doing when I began, but it was just for me, so I didn’t care. I did, for the most part, write it chronologically… until I got about ¾ of the way in and didn’t know how to tie up all the loose ends. That’s when I joined ACFW because I knew I needed help! It’s all kind of a blur now… all I know is that my agent signed me right after my first ACFW conference that year… before I had the book completed. So really, the process was pretty messed up.

With book 2, The Bound Heart/Meredyth Summercourt, I had written about 50,000 words of it for Nanowrimo the year before I joined ACFW. Again, it was all done for the fun of it… but once I finished book 1 and handed it to my agent, I knew I needed to make it a “real” book. I’d actually written it to take place at the same time as book 1, but from a different character’s POV. So, again, I didn’t really write chronologically because what I had needed to be changed so much and added to. I always seem to get the gist of things down, but then I have to go back and rearrange things or add a chapter or two. I basically knew what I wanted to happen, but I didn’t know how it would all work out until each chapter came to me. It took me 10 months total to write book 2.

And book 3, The Captive Imposter/Estella Everstone… for the first time, I outlined the plot and wrote a rough draft so I could enter it into the Genesis Contest under the new rule that the manuscript needed to be finished {which I’m glad I did, since it became a Genesis Finalist!}. This, first of all, messed up any strange ADDle-brained process I might have used before… but then before I was finished revising, I FINALLY got pregnant and basically lost the function of my brain altogether to complete and utter exhaustion. I had my baby 4 months ago… and I’m still working on revising the ending of that book… which comes out in February. {Prayers please!!}

2.) I loved the unique musical influence, especially with Amaryllis’ ties to the Boston Conservatory of Music: how did this act as a muse ?
Oh, I love classical music so much! Especially classical music played as a piano solo or duet. I can’t play myself, but I wish I could! I loved finding just the right piece of music for each part of the book, for each mood Amaryllis was in as she played each piece… and then I would listen to it over and over and over while I wrote. Listening to music, in general, really helps me focus on my books. I have a playlist on my phone for each book. I still listen to the playlists for Amaryllis and Meredyth, and totally feel like I’m right back in the midst of writing their stories.


3.) Can you talk a little bit about the research that you did and how you made sure you were capturing the feel and voice of over a century ago?

Honestly, the voice that comes out when I write is just there. I don’t have to try to sound like I have an “old voice”—as my crit-partner likes to call it—I just have it. And I love history so much! I collect photographs and information about everyday ways of life, settings, maps, structures, anything, really. I use Google A LOT.

My favorite authors are Julie Lessman, Jody Hedlund, Elizabeth Camden and Lori Benton. I don’t think any of them write anywhere close to the same style that I do, but there is always something about their characters that feels deeper than characters in other books. None of them write first person like me, but I try very hard to write my characters as realistically as I possibly can, the way they do. I also like the way the plots of their stories go—I’ve never actually read a book on “How to Write a Book”, but from the very beginning, searched out books I loved and studied how they were constructed, and what it was about the characters exactly that made me love them so much.

5.) What’s next from Dawn Crandall? Can you give us a bit of a sneak peek about your next novel?


Well, my three books of my debut series, The Everstone Chronicles, are actually all coming out three months apart…. Which means The Bound Heart releases in November! Here’s what it’s about:

One accidental kiss. That was all it took to throw Meredyth Summercourt's world upside-down. Determined to marry the ever-elusive Vance Everstone, she simply doesn't have the time or the desire to fall for her friend Lawry Hampton. However, with Vance out of the country and Lawry constantly at her side, Meredyth can’t help but wonder if what’s holding her to Vance is nothing more than a desire to redeem herself from their unfortunate past.

When Vance comes home to stake his claim on Meredyth, will she be strong enough to break free from the tangled web she’s convinced she deserves? Or will she find the strength to accept that God’s plan for her life could include redemption... and quite possibly the love of her best-friend?

And then book 3, The Captive Imposter, releases in February:

Sent away for protection, hotel heiress Estella Everstone finds herself living undercover as a lady’s companion at Everston, one of her father’s opulent hotels in the mountains of Maine—the one she'd always loved best and always hoped to own one day. Within the week, Estella discovers that her ex-fiancé is in the area and is set on marrying someone else. Reeling from her feelings of being unwanted and unworthy, Estella forms a friendship with the manager of Everston, Dexter Blakeley. She soon discovers that he is not simply the manager, but the new owner.

Saddened by this fact, Estella severs their friendship. She manages to avoid Dexter until she finds herself fired from her position due to a misunderstanding. Coming to her rescue, Dexter offers her a job as companion to his sister. Though she doesn’t want to be indebted to him, Estella sees no other choice. While rebuilding their friendship, Estella realizes that although she’s been lying to Dexter about her identity, she’s never been freer to be herself in her life. However, when he proposes, she has to tell him the truth—a truth he isn’t happy to find out.

You can read the first chapter of The Hesitant Heiress online 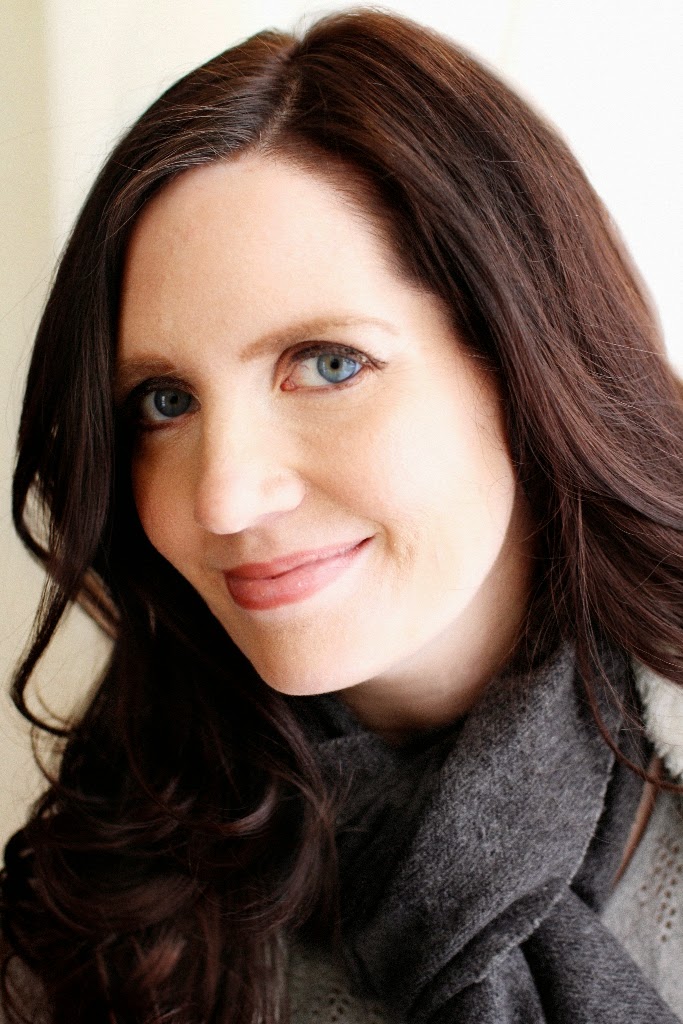 {About The Hesitant Heiress}

After being unjustly expelled from the Boston Conservatory of Music, Amaryllis Brigham sees her dreams of founding a music academy disappearing before her very eyes. Now the only way to achieve her goal comes with high stakes for someone set on avoiding men as much as possible: marry within the year to inherit her grandmother’s fortune. Amaryllis reluctantly takes part in her aunt’s society, intent on getting to the west coast on her own… and without a husband.
Despite her own misgivings, she soon finds herself falling in love with the most unlikely of men, Nathan Everstone, whose father not only had a part in her expulsion, but whose ominous presence has haunted her dreams for a decade since her mother’s tragic death. Nathan turns out to be much more than he seems and everything she never knew she wanted. But just as everything Amaryllis has recently hoped for comes to fruition, it all falls apart when she finds that the real culprit who has been managing her life isn't who she thought at all.

A graduate of Taylor University with a degree in Christian Education, and a former bookseller at Barnes & Noble, Dawn Crandall didn’t begin writing until 2010 when her husband found out about her long-buried dream of writing a book. Without a doubt about someday becoming traditionally published, he encouraged her to quit working in order to focus on writing The Hesitant Heiress. It didn’t take her long to realize that writing books was what she was made to do. Dawn is represented by Joyce Hart of Hartline Literary.
Apart from writing books, Dawn is also a first-time mom to a precious little boy (born March 2014) and also serves with her husband in a pre-marriage mentor program at their local church in Fort Wayne, Indiana.
Posted by Rachel at Monday, August 11, 2014

Thanks so much for having me, Rachel!!!

Eagerly awaiting the next book. I loved the part about the music. My family grew up singing together. Due to sensitive hearing, I can't listen as much as I'd like, but I've always loved music. Classical is so beautifully done!

What a precious interview. I truly enjoyed reading about this new-to-me author and look forward to reading her books. Prayers for finishing the 3rd book! :)
Blessings!
Kelly Y.
Kelly *at* dkcountryarts #dot# com

I loved reading about your writing process! It's great that you wrote them just for fun and turned them into books that you could publish and share with everyone :)

Hi Kelly! Thanks for stopping by! I'm pretty much a new-to-everyone author at this point! :D Thank you for the prayers! I think they helped, because I've been able to do a lot more toward that book three in the last week! :D

Hello Heidi! Yes! I never ever imagined that they would be published by one of the bigger Christian publishers when I started writing them! I was just happy to write! :) I'm blessed with so much this year!

Classical music is so beautifully written. Whenever I see it played live, it's almost like I'm in a trance of wonderfulness. :)