1.)       In Lancaster County, where the Healing Grace books are set, an Amish woman’s prayer covering, or Kapp, is made of starched white organdy. She buys the strings separately, cuts the string in the middle, and sews them on at the corners of the Kapp brim. There are a couple of variations, though. Some women don’t cut the string, and it hangs down in a U-shape. So a person might think they were following the letter of the law, having the strings attached, but not the spirit of it, where tying the bow in the strings is a voluntary act of submission. Some women don’t sew the strings on at all, and there is a “drift” in the wearing of the Kapp by members of the congregation as a consequence. The brim gets narrower and loses its corners. The Kapp gets smaller, exposing more of the hair. And soon, many elders fear, the Kapp becomes more of a nod to tradition than a show of submission. This is why brim widths and pleats in the Kapp are regulated by the Ordnung.

2.)       In my trips to Lancaster County, I noticed that an indication of the degree of liberality in a congregation can be measured by … teenage girls’ sleeves. An Old Order sleeve on a woman’s dress has no ornamentation, not even gathering at the sleeve head. The sleeve is pleated into the arm hole, and hemmed simply. At a recent volleyball game, though, I saw a number of teen girls had dressed up their sleeves, even if the rest of the dress conformed to what their mothers might wear. There were horizontal pintucks above the hem of the sleeve … pleats in the hem to make the opening narrower … and even flowers made of the same fabric attached to the sleeve!

“There were some girls at the volleyball game on Friday who had them, too—and little fabric flowers in between the two tucks. They were so cute.”
“Now you’re just being crazy. Flowers?”
“Sure. Made from the same fabric as the dress. Some were shaped like little daisies, and one girl had snipped hers all around, like a dandelion.”
“You know what Mamm does to dandelions.”
Sadly, Priscilla did, all too well. Mamm yanked them out of the ground and fed them to the chickens, because you couldn’t compost them. They’d just grow back. —Keys of Heaven

3.)       Amish children grow up learning three languages: Deitsch, or Pennsylvania Dutch, hoch Deutsch, or High German, and English. While Deitsch is the language of family and home, and hoch Deutsch is the language of church and Bible, English is taught from first grade and is the language used outside home and church. And, since Deitsch is a spoken language, not a written one, all letters that Amish folks write are in English. There are only one or two Deitsch language dictionaries that have been developed. I use the Pennsylvania German Dictionary by Eugene S. Stine to be consistent. 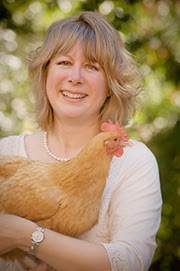 Herb of Grace at Christianbook.com
Posted by Rachel at Sunday, August 10, 2014

Thanks for letting me visit, Rachel! --fellow Canadian Adina