Even Christians watch Game of Thrones 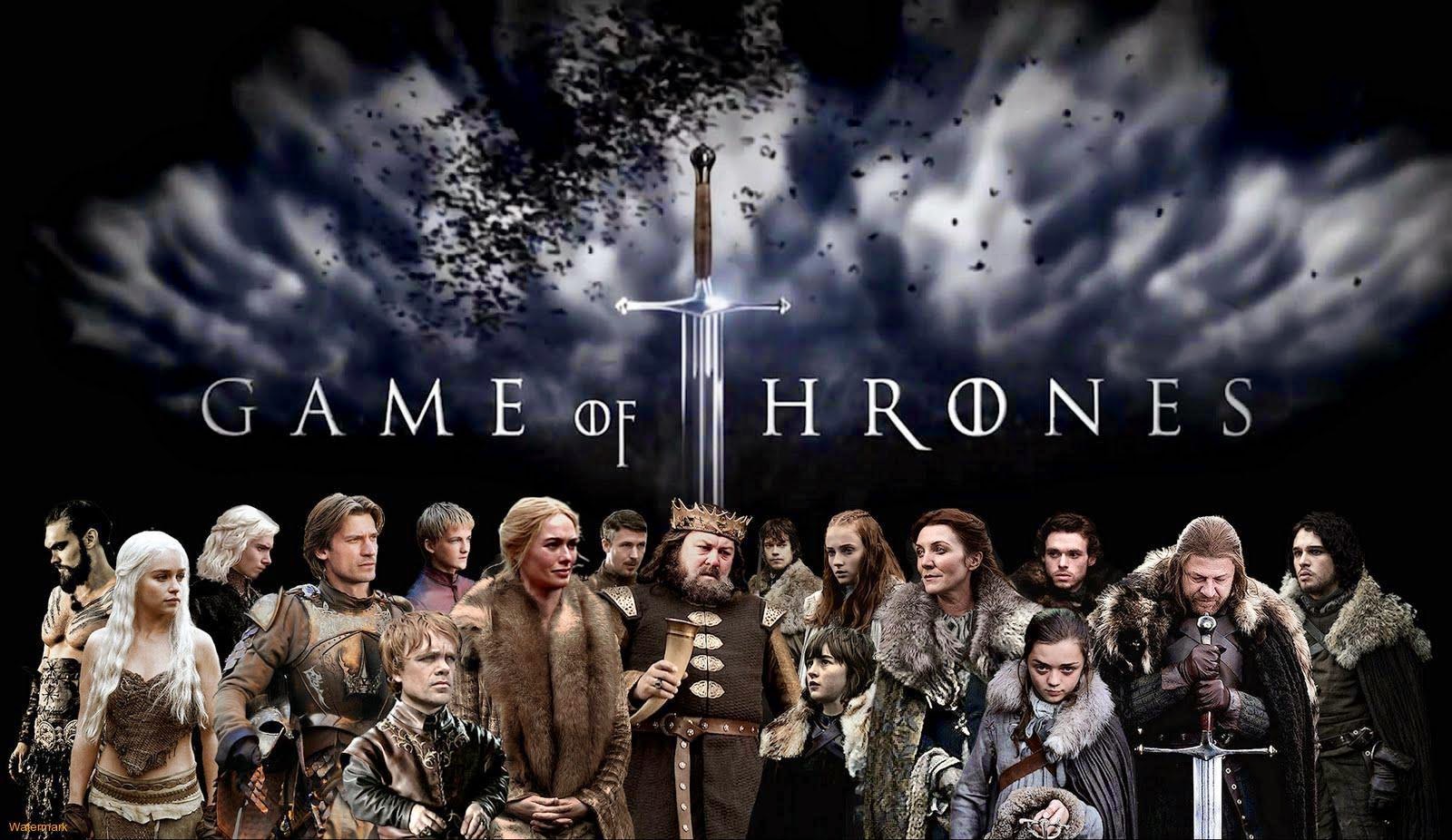 I should preface this by saying I do not write this recommending that believers watch Game of Thrones.  It is very intense viewing and will be obviously offensive to many. I certainly shiver to think anyone under the age of 18 would even go near it, no matter its popularity and allure.  Further, I find a lot of the violence and sexual content completely gratuitous.    I do, however, want to address the fact that many people of faith are drawn to the story and watch it, despite its dishonourable content.  Several Christians of my acquaintance, including myself, sheepishly admit to it, hold semi-private conversations and indulge. To those who cannot possibly understand why those who are cited to live a moral existence would be drawn to “worldly filth” I write this to perhaps give a smidgeon of understanding as to why Christians watch something so unprecedentedly embraced by society-at-large. It is a cultural Leviathan.  Next, I should offer a caveat, if you find yourself to be someone who struggles with content that is explicit and this is something that might cause you to teeter on a downfall or inspire you to act in a way less than holy, then stay away. Garbage in-garbage out.    But I have faith in fellow believers. I believe they can watch, engage, discuss, take the good parts and spit out the bad.  I believe that media doesn’t have to seep into our bones and force us to act in unholy ways. Mostly I think that believers should be aware and not immediately condemn without acknowledging or exploring why something is popular and what their fellow followers might find worthy therein.

Game of Thrones: believe me! The writing is brilliant.  Those history buffs will find so many parallels between Martin’s fictional world and the historical War of the Roses. Beyond the cursing and the gratuitous sexuality, it is brilliant. Ingenious. I can think of few other  artistic endeavours so epic in scope.  And few that sprawl over so many characters, viewpoints, narrative perspectives and, even, within the context of the imaginary world, countries.   It is several balls being juggled in the air and each character is well-developed and each of their world’s fully realized. It is breath-takingly intense, highly political and endlessly surprising---- to add it forces its viewers to confront the darkest parts of human nature.
Here are some of the reasons your friends might be leaving Sunday night service and turning on gasp! HBO:

Christians (like all other humans) are lit by a spark to find a world they can mirror to their own: despite its debauchery, dark and light exist everywhere. Violence and civil war are rampant throughout the world. There are several different examples of religious practice within the world of Martin’s Westeros. When Battlestar Galactica aired several of my Christian friends engaged in discourse on its current parallels.  Jesus spoke in parables for a reason: we are drawn, as humans, to stories which outline some of the principles and shortcomings humans are in possession of and culpable of.

Honour in the chivalrous sense is one still highly regarded.   The knights of yore embody a moral code that we as Christians strive toward.   Brienne of Tarth is one of the strongest female role models on television. She knows what it is like to dedicate her life to a cause that might result in her death.  She remains pure of heart 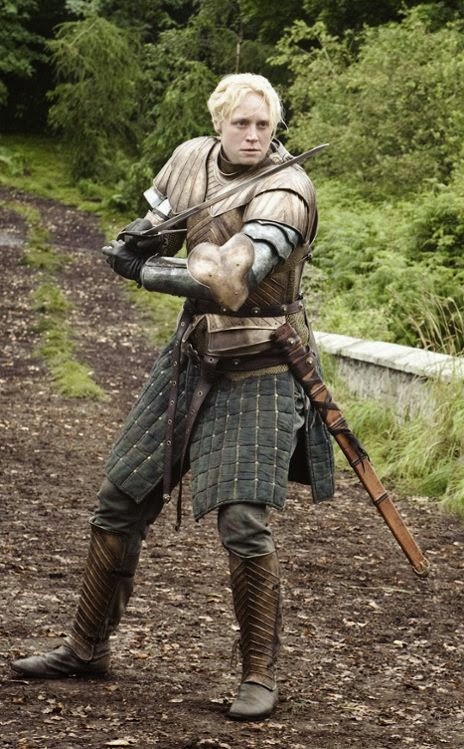 We are conditioned to try and find the good and the redemptive-- even in the most unlikely examples. I mean, honestly, if these characters live long enough they might prove to have hidden depths.   I must confess to wanting to see what their true colours will reveal. Will they be loyal, will they betray or dissent? I so achingly want to be proven wrong by villainous acts and yearn to find bonds between them that might prove them to be redemptive figures. Jaime and Tyrion, Arya and the Hound---what interpersonal relationships might force these somewhat depraved examples of self-serving humanity to display snippets of light.    ( I love the bear-in-the-arena rescue scene between Brienne and Jaime! That’s what I’m talking about! )  Many people would admit to being attuned to the unexpected fates of the characters---and Martin is notorious for “killing people off” and no one is sure from book-to-book or, here, from episode-to-episode who will survive--- but I do think we are allured to characters we want to prove us wrong.

We like Christ figures--- and disciples to a cause: and, if those in their pure Biblical sensibility are not so clearly drawn, those who die for a cause or strive to uphold their cause. Think of darling Sam and Jon Snow up on the wall defending their world from the beastly, dastardly creatures beyond.     To the same end, the men who died defending the Wall from intruders, asserting their honour to death and never swaying from their purpose, late in the most recent season.   Think of Ned Stark who, face it, was one of the most honourable figures in a smattering of less-than-worthy inhabitants.

We identify with outsiders: Jesus was an outsider. He coloured outside the lines and was the thorn in the side of political discourse.  He shook up thousands of years of stern religious teaching. He was a radical.

We are all about stories that implore us to finish the Quest: think of the popularity of Lord of the Rings and Harry Potter within Christian circles.

And finally, because I like to plug my favourite character------


Tyrion Lanister: sorry it’s true. He is a very interesting and engage characters, sometimes Machiavellian, the product of a family who outcast him and often deserving our compassion and empathy. He’s a great character.

I think, too, you see characters who are redeemable, and those who are not. We see characters who are given the opportunity to right their wrongs, confess their sins, reach for mercy and grace, and simply refuse to do so. They get their punishments here in this life. True, we see a lot of good, noble people reach an unjust end, but true evil has yet to reach permanent triumph, and I don't think it ever will.

This was so brilliantly written, thank you for this!

Someone told me the other day that GoT ISN'T well written. I gave them the side-eye. Wut? No, it's brilliant. It is. Saying it isn't, well, that's just jealousy peering through!

The content is... ugh. I felt guilty watching it, until I realized I could buy the DVDs, edit them with my video software, and then own both the originals and a set without all the gore, nudity, and f-words. The shocking thing is, the plot is still intact and good without all of these things, which just goes to prove they didn't need to be there in the first place. Typical HBO.