When I read For Such a Time I knew I was dying to have Kate Breslin on the blog. Her work is genius and this, her first book, a masterpiece. I was so moved. 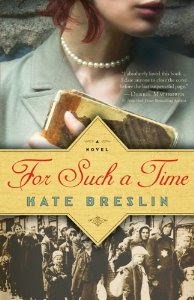 You can read my review of the book here on Novel Crossing but I also wanted to make sure I was featuring Kate on my blog.


1) WHAT HAS BEEN THE MOST UNEXPECTED PART OF YOUR WRITING JOURNEY THUS FAR? Oh, Rachel, where do I start? J Aside from getting published (after twenty years of trying, I wasn’t sure it would ever happen,) I was surprised at how much is involved in the actual publishing process: revision letters, line edits (galleys), final checks, promotion, marketing, and deadlines for the next book. It’s thrilling, hectic, and sometimes feels like riding a roller-coaster. I was also surprised at the wonderful response to For Such A Time. Writing is such a solitary occupation; it’s incredibly gratifying to connect with readers who love your characters and their journey as much as you do. To know that your passion has inspired someone else. I think it’s the best gift a writer can receive.


2) I WAS REALLY, REALLY HAPPY YOU FELT THE FREEDOM TO COLOUR OUTSIDE OF RIGID HISTORICAL LINES IN ORDER TO PAINT A COMPELLING TALE WHILE STILL MAINTAINING THE AUTHENTIC ESSENCE OF A CRUEL TIME PERIOD. WHAT WERE THE HARDEST CHOICES YOU HAD TO MAKE IN TERMS OF INSERTING HISTORICALLY AUTHENTIC FACTS AND THOSE THAT WERE CREATED FOR THE STORY? My most difficult task lay first in finding a setting for the story. I wanted to provide accuracy in regard to the conditions of the concentration camp without making the novel too excruciating for the reader. It also had to be a place where a relationship between a Jewess and a Nazi officer felt believable. I finally decided on Theresienstadt, a Nazi transit camp for Auschwitz in Czechoslovakia during WWII. I was able to plot my story around a real historical event which occurred there, and some of my fictional characters I based loosely on prisoners’ first-hand accounts in the camp. Beyond that, I distilled much of my research and created fictional yet plausible situations to fit with my fictional “Esther” storyline. I’d like to say here, too, that it was important to me to provide the facts as they really occurred at Theresienstadt, and they’re included in my Author’s Note at the end of the story.

3) WHAT ROLE HAS HISTORICAL FICTION PLAYED IN PREPARING YOU FOR YOUR WRITING LIFE. ARE THERE ANY BOOKS THAT INSPIRED FOR SUCH A TIME? Historical fiction has had such a tremendous influence on my writing! I learned to love history through reading some of my favorite authors through the years, “getting a history lesson without knowing you’re getting a history lesson.” The Book of Esther from the Bible was my inspiration for writing For Such A Time, but authors Corrie ten Boom, Elie Wiesel, David Morrell, and Gordon Glasco were among those who inspired me along the way. Ironic for someone who daydreamed during high school history class! J

ANY READER OF FOR SUCH A TIME RECOGNIZES HOW WELL THE STORY OF ESTHER TRANSPOSES TO A 20TH CENTURY CONTEXT. ARE THERE ANY OTHER BIBLICAL TALES YOU WOULD LIKE TO RETELL? Thanks, Rachel. Yes, absolutely! While I have no retelling stories in the works currently, I’d eventually like to explore writing about Rahab (Book of Joshua) Abigail (Book of 1 Samuel) or maybe Susanna (Book of Daniel.)

I’m still typing away on the next novel for Bethany House, but I can tell you it’s another historical romance, this time set in Britain during WWI. The story involves a beautiful Suffragette and a mysterious aristocrat, with a dash of “Downton” and a bit of intrigue. NOT BY SIGHT should be out in summer of 2015.

Once again Kate, thanks so much for taking the time to answer questions about your masterpiece of a debut novel.

Rachel, I so appreciate your support, not only for your beautiful review of the story, but for hosting me today on your blog!


Visit Kate on the web
Find Kate on twitter
Posted by Rachel at Thursday, July 24, 2014

This novel was so well written that I want to read her next one. Wish it would be out sooner.

I came to your post because of the ACFW ice-breaker but then I saw your interview with Kate Breslin.

She was one of the first people I meet at the OCFW last summer where I landed my agent. Thanks for adding to the fun of the mixer.