Last night on TCM on Demand I watched Tenth Avenue Angel to get into the holiday spirit. I had been watching hallmark and Lifetime Christmas films on the W network: but I couldn't take any more bad acting or horrific production values.  I had never seen it before and Margaret O'Brien is the cutest thing in the world, so I thought I would watch it. 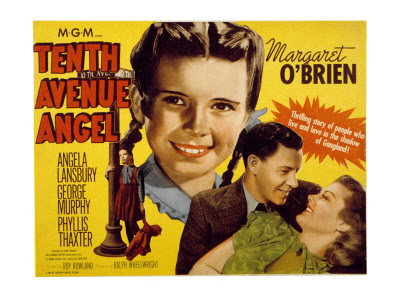 I read somewhere that it was MGM's answer to the popular A Tree Grows In Brooklyn: the adaptation of that story which speaks to child disillusionment and the pain of growing up in depression-era Brooklyn.  Here, the tenements and the block community of those down-on-their-luck is the setting of altruistic Flavia's (Margaret O'Brien) childhood. She's a favourite among the locals as she swings through the neighbourhood on one roller skate (she would love to own a pair) stopping to chat to her friend, Mac, the blind newspaperman and running errands for her mom and mostly-absentee father (a musician always trying to find work and who misses all of the important drama of the story).

Her mother and their neighbour Susan are massive influences on Flavia's life. Her mother has a way of slightly twisting the truth and inserting a white lie to protect Flavia from the grittiness of their circumstance. Flavia, wide-eyed and imaginative, takes everything her mother says literally.  She has always been told that the truth is the most important thing and, thus, her mother just couldn't fabricate a falsehood.

One of these lies regards Steve, a charming man Flavia yearns to see married to her Aunt Susan. Flavia has been told that he has been gone for 18 months traveling around the world.  When she rushes to the train to greet him home, she has no inclination that his gang-activity has landed him in Sing Sing and that he needs to be resourceful enough with his next moves in order to turn his life around for good.

The friendship between Flavia and Steve was what made this film worth watching.  Flavia just worships him and he treats her, not in a humorous, deprecating way, but as a child worth listening to: an equal.  He wants to be the one to ensure she gets the skates she always wanted for Christmas and he is always willing to listen to her: even when things seem to be tipping against him.

Midway through the film, Flavia learns that her mother's proverbs, adages and imaginative re-tellings of circumstances are not true.  This forces Flavia to confront the fact that she has been colouring the world with a rosed-tint it doesn't possess.  The disillusionment and bleakness that follow are rather depressing to behold in one so young.   Flavia had always had such hope and imaginative belief and this is stripped, unintentionally, from her.  The part of her mind that loves geographical and historical facts prepossesses any of the inclinations she had to daydream. In essence, she is growing up; but at painful cost.


A tragedy forces her to rely on a sign her mother once told her: about a cow kneeling on Christmas Eve to bring the Holy Child near to human circumstance.   In this moment , the line between child-like faith in the supernatural and mere superstition is happily blurred in a touching Christmas miracle.  It changes Flavia's life as well as that of her family and it ensures that Steve turns away from one last con.


I quite enjoyed this story. It was remarkably cheesy and Margaret O'Brien is the type of doe-eyed actress who might grate on some adult's nerves; but I think she's precious. I love her speaking voice and the earnest way she approaches every situation.  Plus, she was Beth in my favourite Little Women.

George Murphy is also adorable (see: For Me and My Gal)


Merry Christmas one and all!

TCM is showing this film twice in the next while.
Posted by Rachel at Tuesday, December 20, 2011

Merry Christmas! I have never ever seen this movie...probably because Margaret O'Brien kinda drives me nuts...but I may give it a shot sometime. ;)

I loved this movie EXCELLENT CLASSIC FILM - Angela Landsbury looks like a beautiful 1940's model. Im glad I stayed with it long enough to get into it because it is a gem. Wonderful discovering this classic. Holiday Affair is another great holiday film I had never seen and love.