Film Review: The Adventures of Tintin

I was quite excited to see Peter Jackson and Steven Spielberg's imagining of the famous Herge stories. I always enjoyed the ginger-haired Tintin: an optimistic and intrepid journalist in 1930s-era Belgium (his home) and the European continent beyond where, with his faithful and intelligent dog, Snowy, he excavates all sorts of adventure.

The titular sequence of the film will honour the Tintin many of us recognize from Herge's straight-lined and minimalist illustrations. From there, however, the story is sprouted into animated wonderment adding a life-like feel to Tintin's (voice of Jamie Bell) search for the  Unicorn: a long-sunk ship from the 17th Century, resurrected in three individual models which bear the riddle leading to its lost hidden treasure. Indeed, the film takes most of its action from the popular graphic novel of the same name.

Alongside the briny Scotsman, Captain Haddock (Andy Serkis), Tintin and Snowy race against time and from the oceany waves, a shipwreck, a capsized sea-airplane and to the hot wilds of the Moroccan desert to reclaim the missing links which will restore the Haddock family fortune to the disgraced and often inebriated Captain Haddock.

This is a really charming story and a wonderful dish of entertainment to replace the garbage we often offer our teens and young adults in modern fare.  No ridiculous Twilight nonsense here: rather, another Indiana Jones'-esque adventure spiralling a good-hearted, mischievous and resourceful lad and his two funny sidekicks into a world of history and danger. Apparently Spielberg received Herge's blessing to film the animated Tintin before his passing in 1983. Some devout fans will be thrown off by the shift of a two dimensional Tintin into a full, human 3D form: but it does keep the same spirit of the stories: the quick, comedic dialogue, the flashes of adventure, the wily villains and Tintin & Co. spirited devotion to good. 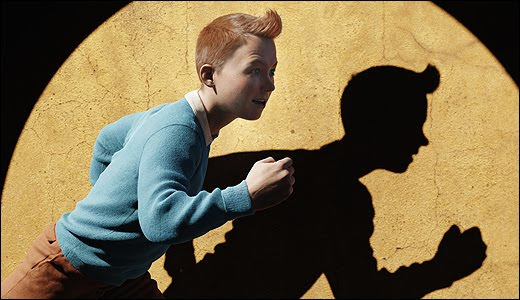 The story was adapted by Steven Moffatt (of Dr. Who and Sherlock fame) and was tight, taut and a wonderful homage to the spirit of the source material.

I am not always fond of 3D films (Hugo was an exception); but Tintin worked quite well in visionary 3D: although, I imagine, the wonderfully colourful landscape of Tintin's adventures would also play well in 2D.
Posted by Rachel at Friday, December 30, 2011

I finally saw this today -- definitely curious about any sequel penned by Anthony Horowitz! :)