Notice how the best shows are literary adaptations? James Barbour is the musical equivalent to Colin Firth or Matthew MacFadyen or Daniel Day Lewis: any strong actor with compelling presence who does period well on-screen.   Barbour, however, has performed some of the world's greatest literary heroes on stage and with his tantalizingly rich, get-a-high-buzz-lindor-chocolate-tasting voice.

I first heard of Barbour when he was playing Beast on Broadway in Beauty and the Beast; but I didn't REALLY know him until he showed up as Rochester in Jane Eyre. I never saw the Broadway production and, let's face it, the lyrics to that musical were horrible; but his voice transfixed me.

In New York a few years back, I had the greatly wondrous pleasure of attending Tale of Two Cities in previews starring Barbour as Sydney Carton.  His performance was mind-boggling.  The musical does a lot wrong and hits many an odd chord; but one thing it did perfectly (largely thanks to Barbour's tour-de-force performance ) was Sydney. It got Sydney right --- and that's a mighty fine thing to have in your court.

[this video is just a slideshow of ToTC pics; but worth it alone for the audio if you have never heard Barbour before and the orchestration is MUCH better on CD]

It was partly Barbour's physicality ( not unlike Colm Wilkinson's: though Wilkinson is short, he is quite broad-shouldered and his stance on stage casts the illusion that he is larger than life) and his captivating presence that left me slack-jawed and near falling off my red velvet seat every time he finished a song.  The show didn't find an audience and didn't last long; however, Barbour deserved a Tony nomination for his performance-- one he never got.

His voice is pretty mesmerizing and I can say easily that, with the exception of Colm Wilkinson, he has the best male Broadway voice I have heard live (Brian Stokes Mitchell is waaay up there).  It's a powerful instrument and I am dazzled that he keeps loaning it to some of the greatest literary heroes of our time.  Soon, Rebecca DuMaurier's Rebecca will see the stage and Barbour will be Max DeWinter(as one example of his range).

The first non-cast recording CD I obtained of Barbour's was exceptional; but only when it showcased Barbour in full-on ballad form.  It was a live CD and featured numerous interruptions that kept me from sliding into the sheer hypnosis of hearing him fluidly craft and caress the lyrics to each song with that incessant musicality he has.  Fortunately, in Bring Me Giants ( the eponymous taken from the concept recording of the musical Cyrano), he showcases his malleability at performing some of literature's most fabulous leading men. 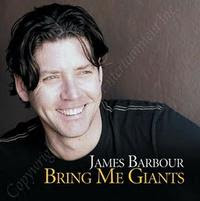 He does a magnificently powerful Bring Him Home from 'Les Miserables' which showcases a range and resonance not all performers with his natural register would be able to do with such ease.  It makes me think that the new 'Les Miserables' movie should have sought him out for Valjean and not, as is, tried to stuff Hugh Jackman in as the star-card. Barbour has a much more proficient stature, stamina and look of Valjean. Moreover, he can sing the part of Valjean in the way that gives pause when considering the more Vaudevillean Jackman.

His This is the Moment from 'Jekyll and Hyde' is an exercise in restraint and slow-building exhileration.  This song has been recorded countless times by everyone from Rob Evans (in full rock-opera form) to Colm Wilkinson (on the little-known concept album I own) and is always a show-stopper.  Here, Barbour plants a unique thumbprint on what is probably now reduced to a figure skating track (I don't watch figure skating; it just seems like people would skate to this).  He slowly and electrically infuses each well-known lyric with the kind of magnetic pulse you want from the soon-to-be-murderous Jekyll: tantalizing you with soft and slow and controlled voice until he reaches the perfect, multi-triplet-ed climax and key change at the end.  [Note: This is Frank Wildhorn. You cannot have a Frank Wildhorn number without triplets, power-bridges and key changes.  It is a must. ]

Speaking of Wildhorn, we also have the darkly sensual I'll Be There, from the concept album of Count of Monte Cristo. It's a moving and passionate duet by Mercedes and Edmond.  Here, Mercedes is sung by Morgan James.  [Note: Frank Wildhorn prefers women who sing like his first wive and muse, Linda Eder.  James definitely has a feel of Eder about her.  Gal has pipes]. Sometimes Wildhorn errs in his pairings with lyricists; but the poetic imagery in this number is melancholy and stirring enough when heard in the context of the Monte Cristo story.

He throws on Music of the Night from 'Phantom of the Opera' to show off his range again. I really didn't need another version of this; but he certainly surpasses poor awkward Michael Crawford, even he cannot beat Colm Wilkinson.

Don Quixote is obviously another literary powerhouse so, of course, Barbour proves he can eat The Impossible Dream for Breakfast.  In the aura of Classically Classic a la Classic, he also throws on his own If Ever I Would Leave You which leaves you ridiculously happy that you have cleaned your brain  of the Robert Goulet version. Go 'Camelot'!


Apparently there is a concept cast album for Dracula: a musical I will hopefully never have to see live; however, Loving You Keeps Me Alive  (yes. the song is called that. muah-ha!) sits well in Barbour's voice (then again, the PHONE BOOK would sit well in Barbour's voice and I would GLADLY buy the "James Barbour Sings the Toronto Phone Book" CD.  Done.)

Finally, the last number is the one that kept running through my head as I stared at the ceiling in New York at 3 a.m. euphorically after seeing him live as Sydney Carton.   I Can't Recall is a power ballad, if ever there was one and Barbour just is  Sydney. I listened to it on my ipod today, like, 80 times.  You should listen to it on your ipod, too! .... GO BUY THIS CD


Anyways, if a novel is over one hundred years old and over 600 pages, Barbour will somehow perform its relatable, melancholy, heroic, complex, Romantic in the Romantically Romantic sense lead hero... and he will perform it with gusto, dammit.

Aside: my last interaction with Cyrano de Bergerac is when Colm Feore broke my heart performing in his perfect bilingual French and English at the Stratford Festival a few years back--- I could totally see Cyrano as a musical.  Barbour, you should be in it all over.

Sidney Carton's BOOTS. Also, REBECCA IS GOING TO BE A MUSICAL?

I don't think I like this idea. But if Barbour is involved, I'm willing to give it a skeptical try.

(then again, the PHONE BOOK would sit well in Barbour's voice and I would GLADLY buy the "James Barbour Sings the Toronto Phone Book" CD. Done.)

Me too. But not just Toronto. Any phone book he sings I buy.