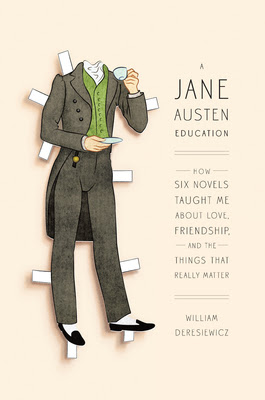 A Jane Austen Education is one of the most delightful books I have read this year and an essential compendium to any extensive Jane Austen Collection of works and criticism ( such as my own). It extolls all of the virtues of Jane Austen in a way we don’t often view them: as tantamount to the greatest life lessons. Walking us through Jane Austen’s six novels in a literary memoir, noted critic and renowned professor William Deresiewicz breathes fresh life into an author whose works I have read to shreds.

Reading Jane Austen for the first time ( as a bitter modernist with a penchant for coffee and sunglasses, apathy and modernism),Deresiewicz mocked the mundane world of Emma: the seeming non-happenstances that threaded through a novel with no overtly bold statements, no visceral truths at forefront, no gripping plot. But, then the book changed, it ( like the best books of literature we peel back like a leaf) become all-to-clear for our author and informed his life and formative academic years in a way that not only propelled him to sink into Austen’s entire canon; but shifted his world view.

His relationships, his view of love, the way he treated people and the lens through which he viewed literature was reformed and hi-jacked by a growing fascination with Austen: who said the extraordinary and catapulted universal truths into the wide sphere of her readership with the ordinary.

From his crush on Elizabeth Bennett to his learning to love in the same way Catherine Morland learned to love a hyacinth at the urging of Miss Tilney, a Jane Austen Education is an ABSOLUTE MUST for those who love her novels.

You will want to think back on your first reading experience, you will identify with the author’s feelings on one portion of the novel while rally against views on another and you will be forced to contemplate how Jane Austen has subverted herself into your psyche, whether or not you knew she was doing so.

Austen’s place in the cultural consciousness as well as her lasting place in media is another thread of the book.

His run-down of the films good and bad

His unabashed crush on Elizabeth Bennet and his willingness to defend her from any criticism: warranted or unwarranted

His treatise on novels as “practice life” and his exposition on the life of a reader whose novel reading informs make-up: morally, ethically, in love, reason and decision

His absolute joy in the Ang Lee adaptation of Sense and Sensibility: casting light on a dark plot

Most importantly, his recognition that the power of the best literary novels is one that takes residence in your brain and being and changes your life.

View the guest blog by William Deresiewicz at The Huffington Post

Oh, this sounds brilliant. And I LOVE the book cover, what fun!

I'm so glad you enjoyed this one! The perspective is definitely unique and I'm glad to see that it lived up to your expectations.

Thanks for being on the tour.