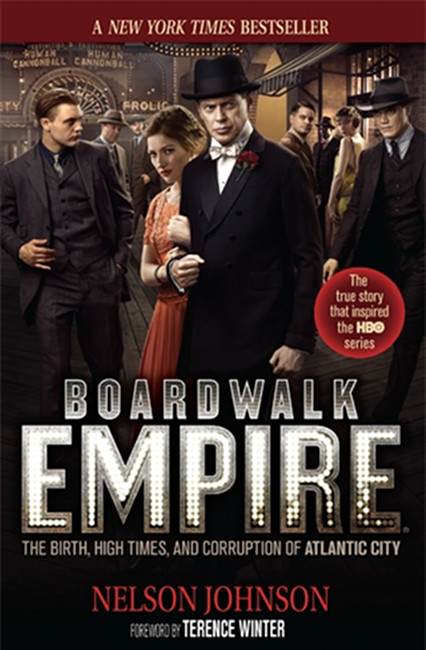 Boardwalk Empire: The Birth, High Times and Corruption of Atlantic City by Nelson Johnson first crossed my radar when I watched the exceptional HBO miniseries of the same name back in the winter.

I was immediately transplanted to the heyday of prohibition and spun into a world with an infrastructure of greed, twisted politics, sex and money. A moral free-space, the corrupt nature of all of the main players in the series and their seemingly conscience-free zone propelled me to want to know more.

At the center of the HBO series and at the center of the high times mentioned in the book’s title is Nucky Johnson: a highly charismatic, outwardly charitable and brilliant businessman who not only played to the hands of widows and orphans; but also made rattling connections with mobsters such as Lucky Luciano and Al Capone.
Clad in one of his dozens of pinstripe suits and with his trademark red carnation, Nucky “The Czar of the Atlantic City Ritz” owned an entire city. He spent money as quickly as he made it and his generosity to the poor of his city was only met in dividends by his passion for wine, women and entertainment.


A powder blue rolls Royce was his transportation, his fitness regime was carried out in elite hotel indoor swimming pools and he breakfasted on steak and eggs at noon. His life is a fascinating one (played to great dimensional measure by Steve Buscemi in the series).

Aside from the mid-section of the book which delights in extracting all of the luxurious excess of a city stripped of any legal or moral obligation, is the countless years of labour that went into establishing Atlantic City as one of the world’s first successful vacation spots. A veritable Disneyland that enticed workers from the city to save and spend their last dimes on the excessive trinkets and treats that establishments along the infamous boardwalk made you believe you needed.

Workers would save for a year to take their family to the beach for a week. New Yorkers would steal one of the 95 trains in and out of Atlantic City to savour a few precious hours of gambling, games and booze and all who worked and thrived there partook in its luxurious, neon delights.

What I found most fascinating in the book was the exposition of the lives of the thriving Black community. It was in Atlantic City that they were given stations above the (sadly) usual domestic service sphere popular as employment in the years following the Civil War. Though they were reduced to a segregated beach and school rooms, the Black Community of Atlantic City had the chance to earn respectable money and varied positions. Being such, hundreds of African Americans flocked to the edge of the Boardwalk for a chance to make a better life for themselves and to utilize the trade skills they honed during the treacherous years of slavery.

When the book talks of the double standard set by journalists who boasted of the need to rid Atlantic City of its Black workers; while failing to realize that it was on the shoulders of these workers that the tottering empire was built, the reader is forced to digest yet another jolt of a moment in history rendered shocking in its limitation, prejudice and incomprehensive cruelty.


The narrative in the story is excessively readable and Johnson’s passion and fascination with the history of this port town is infectious.

So many lives were wasted after years of excess. When the Depression hit and the American populous was stripped of any hope of vacation or amusement, Atlantic City began to crumble. When Prohibition ended (Atlantic City’s one succinct and consistent advantage wrought by racketeers and smugglers for years), the once lavish economy experienced its ultimate downfall.

It is hard to believe that such a society existed and thrived under the watchful eye of law enforcement and politics. The corruption of both sides and the blind eyes turned in trade of power, money and greed model a 20th Century Sodom and Gommorah.

I was absolutely riveted.

So, read this and watch the series and revel in the high times and even lower times of one of the most excessive decades in history.
Posted by Rachel at Wednesday, May 18, 2011

Sounds fascinating! I just read today that Ken Burns' next film is PROHIBITION...that era in history is just rife with DRAMA! :)