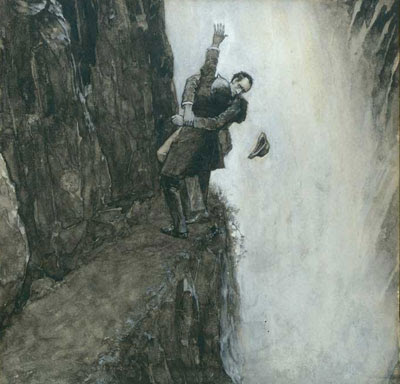 I recently returned from a fabulous vacation where I traipsed around Austria for two glorious weeks. I am sure there is a lot more to come on this. I tacked on Switzerland to the end of my trip for one sole reason: Meiringen was within my grasp. All Sherlockians are familiar with the Reichenbach Falls and our famous friend’s near-destruction at the hands of the disastrous Moriarty. Literary Pilgrimages, it would seem, are alive and well in my world and I re-capped the adventure and the rather sketchy funicular for my friends. Read on Sherlockian:


Tonight is my final night in Europe.

My last clean shirt had been saved for today's momentous occasion to the Reichenbach Falls in Meiringen. The Reichenbach Falls in Meiringen, the setting for Sherlock Holmes' demise at the hands of Prof. Moriarty in "The Final Problem." Next to Baker Street ( where I have been *natch*) this is the most important landmark for a Sherlockian.I left my swanky Zurich hotel this morning very early to catch the first train out. Meiringen is a little village about two hours north of Zurich and the earlier I got there, the earlier I could ensure I got back.... I didn't want to get stuck out there forever....

The train trip was beautiful and well worth the price of the train ticket alone.... even deplete of the destination. It was through the picturesque Interlaken district and our train wove around the Alps and through tunnels and over lakes the bright aqua colour one remembers from Banff. You will laugh at my pictures.

They have certainly capitalized on the Sherlock Holmes ( read: 65 year old British male retirees who wear cargo shorts with socks up to the knee and bucket hats with straps while snapping shots with disposable cameras) tourist population.There is an Arthur Conan Doyle Platz, a Holmestrasse ( or street), a statue of Holmes, a Sherlock Holmes hotel, a Sherlock Alpen nightclub and various pictures and reminiscences and signs of Arthur Conan Doyle and Sherlock Holmes.Without Sherlock Holmes, I suspect everyone would skip poor little Meiringen.I might. I had lunch there and it SUCKED. I ordered the traditional swiss lunch: which was beer and a plate which tried to win the title of "how many colours of stewed cabbage can we fit on a platter?"


Some Sherlockians in London have paid a hefty sum for a lot of the work there but the small museum and funicular rides up the Reichenbach Falls are run by a little old Swiss lady and her husband. I loved supporting them. The museum itself has nothing really to show for it, other than a magnificent set of original Strand magazines imported from London and a recreation of the famous Baker Street drawing room.I went in with about 12 British retirees... all about 40 years older than I. I didn't care. I love Holmes.We looked around and I spoke "canon" ( that is to say, any and all things Sherlock ) with some of the men who were flabberghasted by my knowledge.What was best, is they were a bus group from the Sussex Downs ---- where I stayed when I studied in England. Knowing the region, I said: "Where in the Sussex Downs?"To which they answered: " Hastings. Have you heard of it?"Hello?! Christopher Foyle, anyone?

After, I trekked the half hour hike along the trail to reach the funicular which would speed me up the mountain for a view of the Reichenbach Falls and the great, crested stone ridge.Unfortunately, and considering how well I have struggled to conquer my fear of heights this trip (mounting a sketchy bus up that steep, foggy ridgeway to Hitler's Kehl's Stein; how I have climbed 360 steep stone stairs [ without railing, mind you ]to the Glockenspiel in Graz; how I have climbed up 280 stairs to the highest point of Innsbruck: a Cathedral-like Dome which has little to steady you from heading into the baroque rooftops of the great city; how I climbed the abbey walls in Salzburg and saw the benedictine monks atop a hill which not only looks the city over but dates back to 714.......how I climbed up to the Alpenzoo...)Here, of all places, my fear overtook me.A few notes on the rather sketchy Reichenbach "funicular":Funicular, I believe, is synonymous with a rickety old, open wooden cart a la Road Runner when Wile E Coyote is on his tail and the bridge is truncated. The open and exposed cart, or so I saw from my vantage point safely at the bottom, chugs along a very sketchy track ( the men were working on the track with hammer and nail once one funicular got back in preparation for the next) up, up, up to the top of the falls.There are no rails: just open wooden cart and tracks up the rock.Something else of note: there is an aptly placed hospital at the foot of the mountain, I assume to give solace to those who have plummeted to their death and, like Stephen Boyd in" Ben-Hur", rasping incoherently until Judah shows up, are languishing on the point of extinction.

My stomach turned and I looked up, up, up and saw the spray of the falls and looked down at the plaque noting Sherlock's apparent demise at the hands of Moriarty over said falls and thought: NO WONDER HE DIED ....( We will now give you cynics a moment to insert frustratingly:" HE NEVER LIVED"... which we will ignore).

So, I trudged back to Meiringen happy with pictures and more happy that I didn't die in a freak-literary-pilgrimage- accident ( can you imagine the Globe and Mail Headline: Intrepid young canadian on literary pilgrimage abroad follows in Famous Detective's doomed Footsteps"?) on the very last day of my holiday.