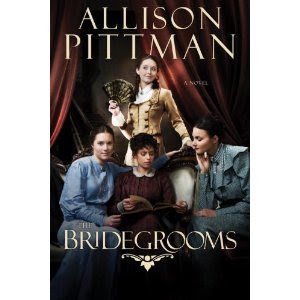 I really enjoyed Stealing Home by Allison Pittman so I was excited when The Bridegrooms became available. I recently returned from vacation in Austria and before planning on a trip to a largely German-speaking land, I wanted to make sure I took enough English language books to keep me occupied on long train trips and in my hotels at night after exhausting days of sightseeing. Was I EVER right in bringing The Bridegrooms.

I love Americana!: the glorious and idyllic turn-of-the-century years of ice cream shoppes and peanuts, popcorn and baseball. Pittman inserts a healthy whipped-creamed dollop of nostalgia but also a sense of longing and wistfulness for an innocent time out of reach. Vada and her four sisters are startlingly different in personality and thus warrant startlingly different beaux. Not unlike Little Women, the sisters are believably rendered on page and their triumphs and travails were heartwarming! The book spans little more than a week in the life of four girls abandoned by their mother at a young age. The mystery of their mother’s disappearance and the spiriting in to town of The Bridegrooms: a raucous and rowdy baseball team are at the core of this fun and fast read. While so many authors would have planted romance blossoming from the heroine encountering an out-of-towner, Pittman chooses instead to study our concept of romance and our romantic ideals. How much romance can be found in the whirlwind of a traveling sportsman, how much romance exists in the steadfast and stalwart, if somewhat consistent, suitor from your hometown? Garrison, Vada’s patient and virtuous fiancé is absolutely one of the most winning ( if quiet and steady) heroes in Christian fiction this year. This was equally as compelling as Stealing Home. Pittman OWNS this era and I am so glad she stepped up to the plate and hit it into the Christian historical field.