I WENT TO AUSTRIA: the post with some bookish undertones and some PICS!

I am currently waiting at Pearson airport for my friend's ultra-late flight to arrive. She had a stop-over in Chicago and seeing as it's thunderstorming there and thunderstorming here in Toronto, our paths will not cross for another---- wait for it-----2.5 hours.
Luckily, I have an Isabel Dalhousie with me and this exceptional new work laptop --- oh so light and compatible and fast and remarkable---- to help pass the time.
Also, kudos to Pearson Airport's free wireless internet.
So whilst I am stuck here.... I thought I might as well talk to all of you..... about musicals and books and musicals and WAIT! shameless Austria photos: 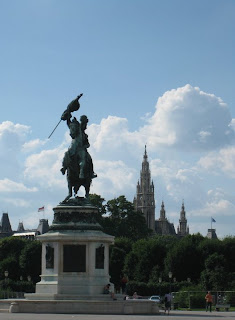 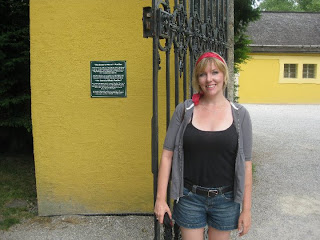 
Above, near where I am standing, is the gazebo that Leisl and Rolf-the-telegraph-deliverer-Hitler-youth retreated to to dance in the rain.


Exhibit B: me standing high, high atop the scaling cliffs winding to an ancient monastery, the rooftops and spires of the gorgeously Baroque city below..... 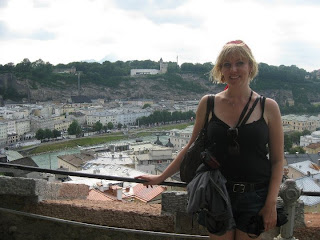 I had wanted to go to Austria since I was a little girl. In fact, my love of Austria stems from a book that I read EVERY FRAKKIN' CHRISTMAS


Since I was 11 years old, Vienna has stayed firmly in my mind as a dream place to visit. Since so few people have an almost life-long dream ( and fewer still have that dream come true), I was very blessed to go and have such a fabulous time.
I love to travel and travel as often as I can --- for work and for play---- but I always saved Austria until the time was right and I could do it in the way I wanted to.
So, I started with five glorious days in Vienna--- then a few days in Graz---- then off to Salzburg for three days ( and a slight detour to the Bavarian Mountains to see Hitler's Eagle's Nest) --- then off on a train to Innsbruck for three days ( Innsbruck was amazing) and, finally, to Zurich and Meirengen, Switzerland ( see post below ) because I am a Sherlock Holmes fanatic.
But, back to Vienna Prelude: Have you ever wanted to visit a city, town or country because of a book?
I know that traipsing around England, especially, was satisfying for someone who had spent her formative years knee-deep in Dickens. Equally so was the experience of drinking melange in the Hotel Sacher underneath the portrait of Emperor Franz Josef ---- the self-same place the hero in VP sits midway through a point in a book I almost know by heart.....
Here's a bit of what I wrote about VP on a blog I used to keep back in April 2005 when I was still in University:
Ever since I was a small kid, I have been absolutely captivated by "Vienna Prelude. I still love this book. I always will. It is historical and musical and fascinating. Elisa Lindheim ( our fair-haired protagonist ) is the daughter of a Jewish Entrepreuner but lives in Vienna under the name Linder so she is able to escape the laws forbidding Jews to play music during the lead up to the Reich.

She is a violinist with the Vienna Symphony Orchestra and spends most of her days on trains across beautiful Europe or at the Musikverein in downtown Vienna chatting up some of the hotties from the bass section. Although she looks Aryan, Germany knows the name Lindheim, and once she is seen with her father at a train station even her pseudonym cannot protect her. Her father is taken off the train and held for questioning and Elisa finds her only chance of rescuing him lies in the capable hands of a brash young American reporter who is often referred to as looking like Jimmy Stewart. Elisa and reporter John Murphy have an on-again mostly off-again romance and Elisa becomes an agent in a plan to smuggle jewish children out of Vienna with fake passports. It is nostalgia for me. I read it every Christmas. I also sell out of it quite a lot at the store. It is very romantic and it continues to make me laugh. Rudy Dorbranksky the witty and cavalier concert master who swings his violin bow around like a sword remains one of my favourite literary characters.And Elisa goes off in a taxi at one point and John screams after her while kneeling on the wet cobblestones and it makes you think of Dvorak somehow. ( everything alludes to music in this book).Vienna Prelude is the first "grown-up" book I fell in love with and, thanks to its author, I want to go to Vienna so badly my eyelids hurt.

Because of Annie Proulx I really want to go to Wyoming.