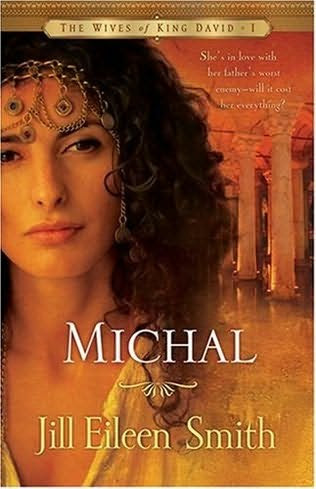 
Beautiful Michal is just growing into womanhood when she first begins to notice the young harpist David as more than a shepherd boy hired to tame her father Saul's tyrranous moods.

With David around the palace speaking with her brother Jonathan and tempering the wrath of the unpredictable King Saul, Michal begins to feel more and more attracted to the brash young man. Sure that David is in love with her older sister, however, Michal tries desperately to hide her feelings.

But, a turn of events at the fateful Valley of Elah catapults David into fame --- and into a very close distance at the palace and Michal must confront her growing love.


Smith retells the famous Old Testament tale in a comprehensive and immensely readable fashion prefacing each segment of the book with its aligning scripture from 1 Samuel.


I must admit that the most fun part of reading Michal was how it immersed me into the story I have known my whole life. The children's rhyme Only a boy named David.... was always at the crevice of my mind as the tale was unfolded in front of me.

As in the scripture, my favourite elements of the story were prevalent: the relationship between David and Jonathan; Saul's wrath and David's constant running ( the first fugitive story, perhaps); the shepherd boy's courage and confrontation of Goliath and the burgeoning belief that David--- a lowly boy--- had been prophesized by Samuel to ascend the throne.


Technically, the book has a few minor faults which I will chalk up to rookie syndrome. There is some awkward onomatopoeia (i.e. Goliath's demise); Harlequinized descriptions( "a mirage with luxurious raven hair"); completely contemporary vernacular interposed with some strange hints of speech of the time period and chapters which start mid-dialogue--- a technique which, unless done well, should be avoided.


Smith is not in new territory here ( see Francine Rivers' Lineage of Grace and Austin's Chronicles of the Kings etc., etc.,) but I commend her tackling of a difficult subject. Michal, like David's other wives, is not a well-developed or exceedingly likeable character. While I do have trouble emptahizing with the Michal of this novel, Smith does offer glimpses of humanity.

Perhaps ( as in Scripture) the most compelling relationship is that of David and Jonathan: a strong friendship preternaturally ordained to usher David to the throne. The fact that Jonathan was willing to forfeit his crown to a shepherd boy has always interested me---- moreover, his protection and fraternal love for David--- is no less than inspiring. Smith does well to establish this relationship.


I will read the next in this series because I saw glimmers of potential. With the renaissance of Biblical stories, I am certain Smith has found her niche.