Wild Card Tuesday: What Jane Austen Taught Me About Love and Romance by Debra White Smith 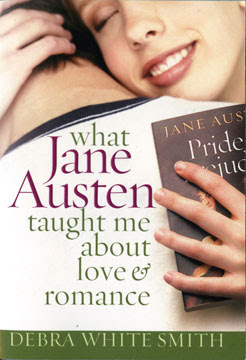 Before I go into the review, I just wanted to talk a little about the structure of this here blog. Yep. This very one.


I love updating it and am happy that it has been such an avid part of my life for about three months now! I have read some great books in the name of this blog!


I do love devoting this site to Christian fiction primarily and that will never change. However, I am allowing myself a Wild Card every Tuesday wherein I can talk about Christian books ( they will be Christian; or at least have heavy Christian principles ) but broaden the genre horizon somewhat.

I want to peek at all of the non-fiction, biographies, theology and memoirs that I am being sent !

And I want to record it here. So, Tuesdays will be a flight of fancy not necessarily restricted to fiction.....


Now, I am nothing if not a Jane Austen fanatic. I have loved Austen my entire reading life ( well most of it, anyhow ). I can quote Austen at whim and I know these stories (and their subsequent film adaptations ) and how they fit into the broader trajectory of the western canon.

I studied Austen at university and I have read her numerous times. I know my Austen.

So does Debra White Smith.

The problem with Debra White Smith is that she knows her Austen so well--- she thought she would take her hand at modernizing it. No easy feat, perhaps, but also no new feat either. You cannot walk into a bookstore without seeing eight Pemberley sequels and a realm of chick-lit titles boasting " a modern Emma." (etc., etc., ). Her modernizations are lacking . I recognize that this entry is not about her Jane Austen series (also published by Harvest House ), but she mentions the series so often in the book ( as a plug, I am sure, to lure readers) I cannot help but talk about them.

I don't believe in negatively reviewing a book unless I have read it. So, you can rest assured that I have painfully traipsed my way through every Jane Austen adaptation White Smith has written.


The least objectible one was Amanda: a modern-day Emma, but they were, for the most part, Jane Austen for Dummies.


White Smith does not give her reader credit. In fact, she is not writing for the thinking reader at all. Testament to this is the mundane fact that she includes a character list at the beginning of every adaptation: outlining her modernized Austen character with its original literary counterpart. For Austen fans, this will be obvious to the point of mundane.

Also, her prose is completely drained of any spark of wit or endearing humour that made Austen so unique. White Smith mentions Austen's superb social satire within What Jane Austen Taught Me but it certainly didn't translate into her fiction.

The heroes in these Austen updates are, for the most part, cardboard. They listen to "Christian contemporary radio stations" ( if you must leave details vague; leave them out all together) and one even returns from a tour of duty addicted to Coca Cola.

And, depressingly, the sparkle and independence we cherish in our Lizzie Bennets and Emma Woodhouses is stripped away leaving unsure, shaky women who desperately need rescuing
( and, in turn, a backbone). No good deed goes unpunished and White Smith's dedication to bringing Austen to the Christian masses fails miserably.

Yes, Virginia, this is your grannie's Christian fiction.


It's not that I don't applaud White Smith for what she was doing. It's more that her work is bereft of adventure and soul.


The uniniated reader ---for whom this is the first foray into Austen-land --- may be entertained and amused but they will completely miss out on what makes Austen Austen.

Fortunately, White Smith's tribute to Austen loans us a little taste of the Austen we know and love ( before being blandly filtered through a sieve in the name of modern romance).

Each chapter heading boasts a gimmicky title ( Augusta Elton and the Stinky Cloud) which leads us into a few Austen characters, what White Smith likes about them, how they inspire recollections of her own history; the moral lessons embedded within the Austen infrastructure and, unfortunately, a parallel story which outlines her own adaptation: often including quotes.

If you want Austen, I can tell you pointblank you are going to be in safe hands with Beth Pattillo's How Jane Austen Ruined My Life. Or Lori Smith's A Walk With Austen.

If you don't mind straying from under a Christian umbrella, Shannon Hale does well ( and stays reasonably clean ) in Austenland. Whereas Melissa Nathan captures Pride and Prejudice in Pride, Prejudice and Jasmin Field.

White Smith boasts an M.A. dedicated to an Austen dissertation and she certainly proves her knowledge of the texts. But, this is a shameless self-promote for one of the most slip-shod series on the market.


White Smith does, however, include a sweet, retrospective letter penned to Austen ---which tugged a smile at the very end of a dull, prolonged narrative on how Austen infused White Smith's brain...and pen...with romantic wonder.
Posted by Rachel at Tuesday, April 28, 2009