the Jewel of Gresham Green by Lawana Blackwell 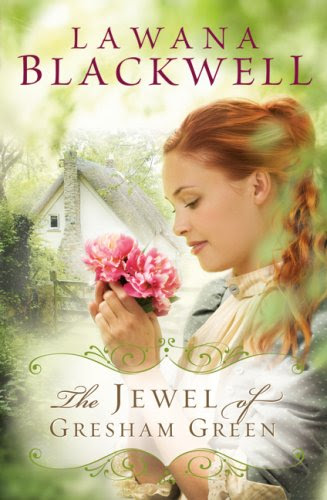 I love Lawana Blackwell. I love every sentence she writes. The first trilogy in the Gresham Chronicles: the Widow of Larkspur Inn; The Courtship of the Vicar's Daughter and The Dowry of Miss Lydia Clark were, combined, the perfect antidote to a blustery, long Toronto winter.


Many a chilled evening found me snuggled in a coffee shop near a fireplace, tea and scone at the ready, completely lost in the delightful Elizabeth Gaskell world of Vicar Phelps( curate of a parish infiltrated by squires and good-hearted cheesemakers, farmers and teachers and the like), and his elegant Julia Hollis ( the owner of the Larkspur Inn: a coaching house turned hub for eccentric boarders: gardeners, melancholy actors and spinster writers). Like Cranford or Lark Rise to Candleford, Blackwell's strength is in weaving charm, humour and,at times, pathos into a series of episodic vignettes which perfectly portray daily life in rural 19th Century England.

I just finished the Jewel of Gresham Green:

As is the case with all Blackwell's novels, there are one or two main strands ( this one featuring a widowed mother and her adorable daughter fleeing the harmful potential of a rakish London landlord for the safety of the Gresham parish ) and plenty of subplots to colour in the sidelines. My favourite plot in the novel involves the jubilant writer Aleda and her friendship with storyteller Gabriel Patterson. The last time we saw Aleda and Gabriel they were substantially younger and I love what they have grown up to be. Aleda ducks conventions, lives in a writing cottage where she doesn't feel the need to have a water closet ( because Shakespeare didn't have one) and has a Jo March-esque tendency to write pot-boilers about pirates eaten by komodo dragons. Blackwell's inserted snippets from Aleda's magazine serials and moments showing Aleda plotting the next portion of the novel are to die for!


I really love how funny and fresh Blackwell's prose is. She captures the time period perfectly and throws in tidbits of every day life that balance the charming action of the novel with plausible historical fact.


Blackwell's novels are the perfect modern specimens of Victoriana. You will find no writer stronger-in either Christian or secular publishing-who better understands 19th Century wit, dialogue, grace and every-day life.

Blackwell takes you back a hundred years or so, drops you off and lets you float as an outsider amidst some of the most compelling and dimensional characters I have ever had the privilege of meeting.
Posted by Rachel at Thursday, April 23, 2009