After a Saturday writing and plotting and musing I happened to watch a few late night re-runs of Perfect Strangers: a television show I probably ---honest to God--- have not seen since 1991 when I was super young.

While watching, I  was impressed with the cookie-cutter formula of the writing. Each 22 minute episode (I watched four ) had  a very definitive beginning, middle and end while still taking time to nurture relationships, develop character and work into the world and mythos it had created. I wondered how I could align the story structure of an episode of with  my current efforts to plot a cohesive novel, especially a chapter of a cohesive novel.  Usually I write a novel and then insert the chapter breaks later as they fit into the rhythm of the story: especially as I have a penchant for writing sequences and scenes as they pop into my head, sewing them into the greater patch-work quilt of the novel later on.


But Perfect Strangers taught me something: A careful writer can plot out a chapter in the same way that an episode of this 90s sitcom is structured.

A recap: for those of you who haven't seen this in a billion years like myself.  Larry is a stern and cynical journalist for a fictional Chicago paper. He lives with his roommate and distant cousin Balki from a fictional Greek-like island whose dream of being an American is realized.  It's all very Neil Simon, as Balki who is good-natured and naive in big city life clashes with Larry's hard-edge. Shenanigans ensue.

I watched an episode where Larry and Balki want to go home for Christmas in Madison, Wisconsin but there is a blizzard and they are stuck in their apartment in Chicago. Let's use this to see how we can implement the same rules in the formation of a chapter:

Intro to Starting Conflict: Super excited Larry and Balki want to go home to Wisconsin on Christmas Eve; but there is a blizzard and all of the planes and buses are cancelled. Simple, but immediate conflict.


Conflict Explored while Character Reactions Developed: Larry has been telling Balki who is spending his first Christmas away from his family in Mypos that traditions change.  However, when he learns that he is unable to get his Christmas wish and spend his Christmas with his family, he turns characteristically mopey and cynical.  Balki is the one who tries to make Christmas happen: complete with Charlie Brown Christmas tree, food secured from the only open store (a Jewish deli ) and Christmas lights, while dressed as Santa Claus.


Resolution:(and, in the propensity of 90s sitcoms of this ilk, a collective awwww from the audience) with a lesson learned and a person or theme or plot-point  redeemed: Larry and Balki exchange meaningful Christmas gifts and Larry's heart is changed when Balki presents him with a home-made quilt. They hug and feel the Christmas spirit, no longer lonely or angry but happy for the family and joy they find in their circumstance.


Easy, right?  Every chapter I write should be the same: intro to conflict of the chapter: whether on a large scale or a small situational scale, the development of this conflict, and the resolution which, in a novel should serve some purpose to either portentously inspire the reader to want to know more, develop character or serve as some finality to a recurring thread. 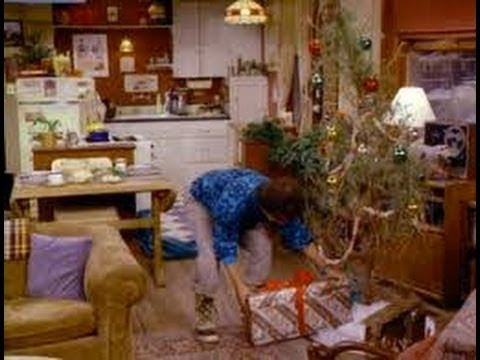 Beyond Structure, Perfect Strangers did well at keeping the feel for the world it creates in tact.   It may not be rocket science, but it knows its characters and its world pretty well. The confidence was, for me, striking.

What do we learn?

Own your Mythos and work with it: Balki is from a mythical island named Mypos which is chock full of customs singular to the Perfect Strangers world.  He has his own traditions and culture such as a Christmas turtle and roasting radishes on a fire. Absurd, yes;but the show owns this absurdity and is confident enough in its ridiculousness that Balki's sincerity makes it plausible.   If you are confident in the fictional world you create, readers cannot help but fall into the trap you have set for them and, in turn, believe every word you say.

Continual character traits: Most of the action in each episode revolves around how two different people approach a similar conflict due to their opposite personalities, traits and, in this case, cultural barriers.  By the end of the first episode I watched ( and drawing on what I remembered from 20 odd years ago ) I had an inkling of how each character would react to a given conundrum.  Yes, this is 90's sitcom cliche; but it also is confident writing. You want your readers to identify and know your characters well enough that they can at least take a good crack at how they would handle and approach a situation. It leads to ownership of a book and story and its action.  And reader ownership is something that authors should crave. For it is synonymous with investment.


Follow your Chekhov Rule:  I knew that Larry's car didn't break down in the storm affront a Christmas tree lot for no reason. Don't put a gun on a table in the first act if it doesn't go off in the the third.  I knew, as audience, that the Christmas tree would factor into the story.  Your readers want to feel that they are in on the game, to an extent.  They want your words to make them feel smart ---even for a moment---and even if you will turn the game on its ear later.

Capitalize on Popular Tropes  For popular tropes mean longevity.  Larry and Balki are the immediate odd couple archetype. To this, they are surrounded by circles of "Fish Out of Water" "Culture Clash" "Man vs. Capitalism" etc., etc.,  It is a formula done to death; but obviously a formula that resonates with people as it continues to be successful.  We like to see two opposites approach a similar situation and see how they will fight, barter, negotiate and waltz their way around it, peppering conflict, before smoothing to a resolution. We also like to find facets of each character to relate to.  Pepper your characters with different personalities, clashes, passions and pursuits and you are destined to find a reader who taps into these singularities. As a reader, I want to latch on.

Dialogue is only as good as the tapestry it is set against  Perfect Strangers is a show of movement. Of course, as writers, we cannot see physical comedy that we can when we watch two actors on a sound stage; but we can keep our stories moving.   I know few readers who enjoy (with exceptions, such as a tea cozy or closed-room murder) two people standing in the same place and just talking at each other.  Larry and Balki, even in the confines of their snowed-in apartment on Christmas eve, were always moving.  They were talking, yes, and talking to bridge together the traits and tropes aforementioned, but they kept my attention because they moved.  There is a reason, too, that in theatre, blocking is so important. Give your reader something to look at, even if the action is stagnant. Just because the action of a sequence takes place in a room to propel important dialogue that will tweak the cogs of your story's wheels, doesn't mean it has to be dull as tombs.  Dialogue can be snappy and peppy and be used to give important and vital book information; but have your characters doing things, too.  If this fails, have the set do something.  Don't set a scene at a kitchen table inside if it can be explored on a walk through a nature path or a bustling city street. Give the mind's eye something to keep it awake and alive.

To bring this macro micro once more,  I thought of how all of the above can easily be used when considering the outline of a chapter. To this end, I decided to try it.  Instead of my usual "insert chapter headings later" I plotted an entire chapter in Perfect Strangers mode and held up the action therein not only to the skeletal infrastructure; but also the rubrics of colour that make the action and its characters sizzle, spark and colour---- colour as bright as one of Balki's neon 90's vests.