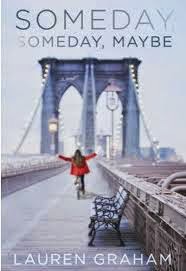 "My deadline is here...and it isn't even a tough call to say whether or not I've achieved what I came for--- no agent, no job, and as of tonight, no boyfriend ---or whatever it is a person who says he loves you but ignores you in public should be called. ...How'd it get this far and not go pop!?"

Franny Banks has six months left on her self-imposed deadline to make something of herself and her struggling theatrical career in New York City.

The mid-90s is awash with change and popular culture is asserting itself in the strangest ways: cool people are sporting the Rachel, one's Filofax is how daily life is recorded and Windows 95 is a must if you want to apply for any sort of secretarial work.  Into this, Franny goes on auditions, dates men who are wrong for her, attends acting classes and tries to figure out who she is and how to become the person with the je ne sais quoi that will no longer land her the perfect agent but the role of a lifetime.


It is Franny's insecurity and her vulnerable, quirky, Poptart voice which dazzles in this competent and snort-diet-coke-out-your-nose offering from talented actress Lauren Graham.  Here, Graham obviously imparts her wisdom and knowledge as a successful actress but also her inherent intelligence.  The book is winsome, a snapshot of a culturally significant time and a buoyant and bubbly slice of life from a decade hallowed by nostalgia for many.

One of my favourite aspects of the novel---besides being given a sneaky glimpse into Franny's FiloFax life and recordings of her auditions, shopping lists and cheese puff addiction, were the inserts of scripts that Franny was auditioning for (brilliant: soap operas! zombies!) and the taste of New York through Franny's eyes.  Franny at The Phantom of the Opera is one of my favourite sequences in any book of late.

"I'm enclosed on either side of a sort of Dan-tent"

"....Dan kissing while Stockard Channing gazes down on us, her pastel pencil red lips smiling in approval"

Speaking of the Phantom chandelier: "When the audience bursts into thunderous applause, I'm swept along for a moment against my will, if by nothing else but the feeling of being part of something---whatever that something is."


"By mistakenly acting like someone with confidence, I found the real personality I always hoped was buried beneath the other one--- the one I used to have
--full of doubt and unattractively low self-esteem. By accidentally acting like the me I wanted to be, I've convinced someone I'm actually that person and I've nearly convinced myself."


"I can almost see the letters that formed the words suspended in the air between us. Part of me wants to bat them away and watch them fall to the ground by making a joke or saying something deflective, but I also want to leave them floating there to savour the compliment for just a second more."


"The moral of the story is---stand up for what you believe even if its a silly technicality that means losing a job."

"The only thing you have that isn't in the hands of a dozen other people is your sense of what's right for you."

I read this book last summer and thought it was a fun summer read. I liked the backstage peek into the reality of an actor's life. Loved your post!