Litfuse Blog Tour: Meant to Be Mine by Becky Wade

From the publisher:  Ty Porter has always been irresistible to Celia Park. All through high school--irresistible. When their paths cross again after college--still irresistible. This time, though, Ty seems to feel exactly the same way 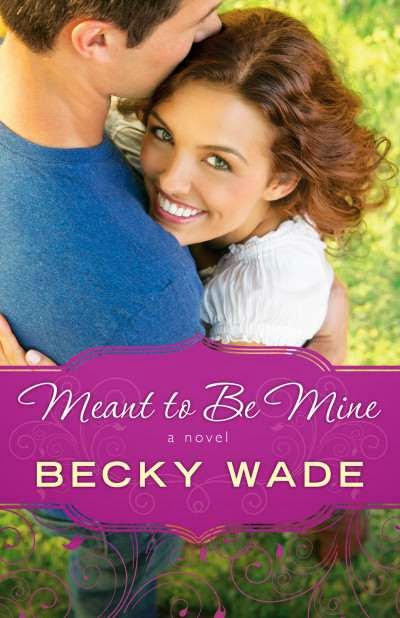 about Celia. Their whirlwind romance deposits them at a street-corner Las Vegas wedding chapel.

The next morning they wake to a marriage certificate and a dose of cold reality. Celia's ready to be Ty's wife, but Ty's not ready to be her husband. He's a professional bull rider, he lives on the road, and he's long planned to settle down with the hometown girl he's known since childhood.

Five and a half years pass. Celia's buried her dreams so that she can afford to raise her daughter. Ty's achieved all of his goals. Or thought he had, until he looks again into the eyes of the woman he couldn't forget and into the face of the child he never knew he had.

How much will Ty sacrifice to win back Celia's trust and prove to her that their spontaneous marriage can still become the love of a lifetime?

Meant to be Mine by Becky Wade continues in the author's tradition of compelling character-driven contemporary romantic fiction with strong faith themes.  It begins with wide-eyed Celia living it up in Las Vegas making a rash and hasty decision to marry her high school crush, Ty Porter.
The next morning, however, after a whirlwind ceremony and a night in each other's arms, Ty leaves Celia: unknowing that she carries his child.

Years later, Celia is raising her adorable daughter Addie to be a strong and independent female: tweaking Disney princess stories to capitalize on attributes that Addie must learn in order to be a model citizen (easily one of the best aspects of the novel --- "Or, if the girls preferred jeans and sweat shirts, then that was fine too. Aurora respects individuality. All the girls were allowed to go into the fabulous castle gardens and pick flowers and make themselves bouquets" ) and Ty waltzes back into her life again: with the same chiseled jaw and sparkling eyes. This time, intent to win her back.

There are a dozen ways this would have gone wrong under the guidance of an amateur pen: but Wade's writing shone above the conventions of the genre.  To begin, The lost-love-reunited-pursuit thread one sees in several romances is deftly explored on both sides of the spectrum.  To my delight, both Celia and Ty, realistically flawed, edge toward the commonalities that enticed them to each other at the beginning of the story. The yin and the yang.

What stands out most is the attention to character development and change. Celia is rightly embittered towards Ty but ploughs through the harsh soil of forgiveness to reach an understanding. Ty, on the other hand, realizes it will take more than buying pink cowgirl boots for his daughter and securing an automobile for his wife for her to slink over to his side .

And it works. It works because there is enough subtlety peppered throughout to flavour a believable relationship: Celia's worry over Ty's well-being, Ty going out of his way to help her ill uncle, a few stubborn pet-names the years have yet to wear off...

I didn’t want to like Ty Porter. In fact, I was looking forward to seethingly hating him. He was absolutely what I despise in men: the perfect cookie-cutter cowboy. To add, he left the heroine flat and dry (and pregnant) after marrying her and capitalizing on her love for him.  Then, he had the audacity to show up again and think that he could weasel his way back. HARUMPH!

....But something in the story softened me to Ty: it wasn’t his willingness to sacrifice for the family he so longed to forge together or the money he used from the rodeo circuit to buy moments of comfort for his ex-wife and his adorable little Addie.

Oh Addie.  Honestly, so many child characters are gratingly precocious, but Wade ( perhaps because she has first-hand experience with young children ;) ) does a great job here.... and it is a good thing; because Addie is central to the revitalization of her parents' hearts and subsequently their reunion.  I had a bit of a conversation with Becky Wade about this on Facebook.  I mentioned that what strikes me as the ultimate in wonderful here is that it balances Addies's inclusion in the romance well. She is part of the "meet cute part II" when Ty  and Celia reunite and in the development of a relationship that merely budded before and is now given time to flourish.  She is so integral to the story and her progression, like everything here, is so natural.  It seems organic and there's enough left-over attraction between Ty and Celia that Addies' involvement is not only the central glue, it is what sparks them re-evaluate their relationship.  Addie propels them to both step out of their comfort zone and embark on the pivotal changes that steer their relationship into the next chapter.  She inspires them to let their guards down and embrace the child-like vulnerability and joy they see in her as well as ruminate on the central values that she forces them to think about: needing to be surprised and delighted, birthday parties and pony rides, play, lessons, needing care and needing home.

Meant to be Mine uses popular romantic tropes to explore the power of reticent forgiveness--- and it does so successfully.

Beautiful review, Rachel. Reading this one now, and it's so lovely. Becky sure knows how to pull the readers in and keep us glued to those pages - definitely feel like this is her best yet! :)