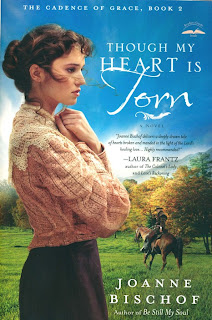 I am delighted to have Christy award finalist Joanne Bischof on the blog today.

I loved Be Still my Soul as well as Though My Heart is Torn. To read my review of the latter, check out Novel Crossing today

Joanne was kind enough to answer a few questions for me.

1.)When you were first inspired to write Lonnie and Gideon’s saga, did you have an vague outline of some of the events that would transpire during their marriage--- such as the appearance of Cassie in Though My Heart is Torn?

In truth, I didn’t. When I set out to write Be Still My Soul, it was a standalone. It’s when it was finished, that I looked back and realized that Gideon had more growing to do which meant more lessons—and more troubles. For a redeemed womanizer, I wanted to think of what was the greatest challenge he could face: that’s when the story took the twist for him to lose his family, the only thing he held dear in the end of Be Still My Soul and to be forced to reunite with his old flame, Cassie in Though My Heart is Torn. It becomes a bit of a “will he/ won’t he” story and most readers have mentioned that they’ve read it so quickly just to find out what’s going to happen!

2.)Music is such grand part of the story-telling tradition in regions such as the Appalachian mountain setting of your work. Indeed, Gideon’s popularity and talent as a bluegrass musician is a bit of a catalyst for the action in the story. How much research went into this facet of your series?

This was one of the areas of the story that came the most naturally. I was raised in a home filled with music. My dad plays the guitar and a handful of other instruments like the banjo, mandolin and harmonica and he and my mom both sing. I’ve spent so much of my life surrounded by the tuning of a stringed instrument, that the sound is like coming home to me. Incorporating it into Gideon’s character was so fun. Playing the mandolin is something he’s truly good at and for a man who can’t read or write all that well, I really wanted him to have a few things that made him stand out in unique ways.

3.)I am very much moved by the grace of Elsie and Jebediah ---not only as salt-of-the-earth Christians; but as parental figures to two characters who have tattered backgrounds. What inspired their creation? Are they based on a couple you know?

I believe that sometimes it’s those who show us love and grace who become our closest family. Though Jebediah and Elsie are in no way related to Lonnie and Gideon, it was in their loving home where they learned about God’s goodness and for Gideon, his need for a savior. I think that many of us may be able to look back at our lives and spot a Jebediah or Elsie along the way. Someone who stepped in and was a guiding light just when we needed it the most.

4.)I would say very certainly that the setting of Rocky Knob and the Applachian mountains are as much a character in Though My Heart Is Torn as Lonnie and Gideon. What drew you to the majestic beauty of this region and what are some of the ways that helped you capture its essence and spirit in your prose?


Looking back, I think the the region sort of found me. I’d been listening to a lot of folk music at this time, even taking bluegrass lessons for the mandolin and had recently moved to the mountains from the hot valley I’d grown up in. One random day, I was listening to Alison Krauss’ “Sleep On” that the idea for Be Still My Soul struck me. There’s a line where she asks, “will your heart ever be mine?” In that moment, I saw Lonnie’s character and I knew she would be married to a man who didn’t love her. That’s where Gideon came in and the Cadence of Grace series began. Then on, I’ve spent a lot of time studying the region and almost always had some kind of folk music playing while I worked. I adore this area and culture and infusing all that into the series has been such a joy. I knew I’d found my writing home in the hills of Appalachia.

5.)If your readers could have one “takeaway” from the novel to help strengthen their faith walk, what do you hope it would be?


I always hope readers will take away from my stories the idea that God can take even the worst of sinners and use them for His glory. I think this truth is sprinkled throughout the Bible in so many ways. It’s not who we are or where we came from, but what we can grow into by looking to the Lord for direction. It’s never too late to be used and we’re never too far gone to seek redemption.

Visit Joanne on the web

Enjoyed this interview, and just love both of ya! Can't wait for the last book in this series, Joanne. Yes, there were some moments in Though My Heart is Torn when I truly thought Lonnie and Gid might not wind up together!

Rachel - thanks so much for this fun interview! It was such a treat. You have such a lovely voice that comes through your words. :)

Heather, thanks! I am SO glad. Especially now that the book isn't terrible anymore ;) Yay for rewrites! LOL Oh, I know...I always feel so bad about putting readers through that...all the more reason I am so excited to get you the 3rd book.

Great interview, ladies!! I am counting the days when book 3 comes out!!!

I've had this book recommended to me several times. I really need to get a copy soon!