It Happened at the Fair by Deeanne Gist 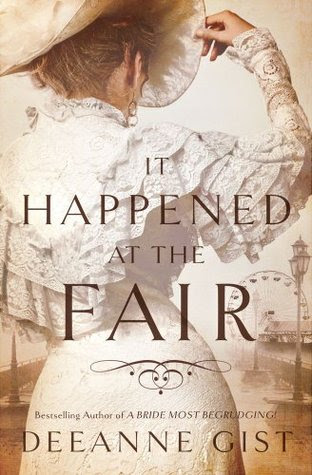 Deeanne Gist is a popular author. We all know this.  Her Baker published books placed spunky women in historical circumstances, taming the men they were often forced into relationships with (see Bridge Most Begrudging, Measure of a Lady, etc.,). Gist was a bit hit and miss with me, but she always wrote some sparkly, memorable scenes. I’ve read every one of her published novels thus far.

Her new release with Howard Books is her best so far. By far. A spicy, sexy (yes, swoon ladies, swoon: this is the spiciest Christian historical I have read) and fun romp through the famous Chicago World’s Fair in 1893.

Cullen McNamara is a sweet farmboy from South Carolina whose proud father sponsors his exhibit at the fair so he can show off his water sprinkler invention. While there, on his first day, he experiences a sweet meet-cute amidst the throng with Della Wentworth. Della is charmed by his gentlemanly manners, but remembering her father’s caution as to the wary intent of young men, escapes from him.

Cullen sets up his exhibit and finds he has trouble hearing prospective patrons with their prospective patents over the loud machinery in proximity. A friend suggests he visit the lip reading teacher who has set up a school for the hard of hearing ---children who are learning within the fairgrounds.  Surprised to find his acquaintance again and delighted that she is even prettier than he could have thought, Cullen makes her a deal: she will have an escort to see all of the delights of the fair after work each day if she will teach him sign language.

Now, this is where the story excels: there are several World Fair books in the CBA ( my  favourite A Proper Pursuit by Lynn Austin,  The Pursuit of Lucy Banning by Olivia Newport, etc., ) but those use the setting in periphery to add to plots established greater elsewhere. Gist sets most of the action of the novel on the fairgrounds, interspersing each chapter with cunning ephemera: pictures of the fair, anecdotes, maps and descriptions.  This is so well researched and so well plotted you feel like you are wandering through the grounds with Cullen and Della and seeing it through their eyes: from a dutch café boasting hot chocolate, to an unexpected fire that throws Cullen and his friends in the midst of danger. To add, Gist’s obvious research into signing and lip-reading and the methods in which they were taught and employed in the late 19th century was fascinating.

To add, both characters find self-discovery outside of the usual realm of romance during their time at the fair: a lot is riding on Cullen’s father’s investment in his sprinkler system and Della is adamant that lip-reading, approved by Alexander Graham Bell, is a preferable method for those hard of hearing than signing.  When Cullen mentions that he feel he possesses degenerative hearing, Della’s work with him because more imminent.

There are a few historical personages as clever cameos:  Graham Bell, for one, Helen Keller as another. But, smartly, they are mentioned in hearsay and Gist doesn’t attempt to establish their characters with supposed dimension.

Now, back to the swooning I mentioned earlier. There is one delicious scene where Della challenges Cullen to prove he is a farmer. In this slow, languid and spicy moment, Gist pushes the edges of chemistry and palpable tension while still remembering her target demographic. The edge is there if you want to read it and the physical attraction between the two ( made more so confusing for Cullen who has a sweetheart back home) will surprise readers of a lot of CBA romance.

I think many fans of Christian historical romance will want to put this on their must-read list!

It Happened at the Fair  releases in April through Howard Books and is available for pre-order.
A short novella, Tempest in the White City : a prelude to this novel is slated to pub on March 19. Here it is at amazon

I would like to thank Howard Books and Netgalley for the review copy. With thanks to LITFUSE

Yay! So glad this book is worth reading. I've liked Gist's works but haven't fallen in love with them. This book sounds like a great, fun read.

Now... I cannot remember if I signed up for this tour or not. LOL. If not, then here comes a pre-order. :)

Thanks for the review, Rachel.

Sounds like I will definitely have to give this one a try.