Joe Wright is nothing if not an extremely visionary director of magnificent literary adaptations (Atonement, Pride and Prejudice), Tom Stoppard is a brilliant wordsmith who understands the complexities of the theatrical involvement of the audience in mediums live and recorded; pulling them slowly into the characters, the action and in the words that spring them to life.

This duo has created something wholly unique, sumptuous, sensual and riveting in their new interpretation of Anna Karenina.  Like most, I read the epic novel and waded through the map of intertwining story lines; remembering vividly some scenes while completing losing others ---the resonance and the spirit of morality, of double-standards, of the inception of honour and the inkling of redemption, staying tautly with me.

Anna is married to the stoic and upstanding government minister Karenin.  Her circle includes the young and vibrant Princess Kitty, her brother Stiva and his put-upon wife and a mélange of frothily-dressed gossips and society climbers who seem to look far beyond their own shortcomings to openly mark the errs of others.
At the beginning, the good wife Anna is seen retreating to her brother’s house in Moscow to convince his wife to forgive his recent infidelity. Little does Anna know, that this is a foreshadow of the most dramatically ironic kind.

At a train station, Anna encounters Vronsky and it is lust and passion at first sight.  I will never look at their affair with the term love on my lips. What they share and experience and what develops against the sensuous spectacle of the societal stage in Moscow and St. Petersburg, with watchful eyes ever pealed to its ultimate impropriety and unveiling, is nothing more than selfish passion borne of the idea that “it is only when things are forbidden that they become truly fascinating” (L M Montgomery, “The Blue Castle”).

At first, Anna’s husband warns of the appearance of her indiscretion believing that she is above reproach; but is nonetheless careless.  Appearance and spectacle is a major motif in this multi-layered cake of frills and garlands and staged sparkles.  At a steeplechase event, Karenin learns the truth when Vronsky is thrown from his horse and Anna yells an anguished cry over his accident.   Anna, then, confesses everything to her husband: including the fact that she is pregnant with her lover’s child.

At this, we experience a turning point within Karenin: at first we find him understandably cold, deep-seated hate saturating his core despite his protest that he has never been a cruel man.  Then, upon a sojourn in Moscow with Stiva and Anna’s relations, he learns of Anna’s post-partum illness and rushes back. It is here that the cold and put-upon man is transformed into an emblem of reconciliation and grace.  Over the fevered form of Anna, Karenin shakes hands with Vronsky, consoles him and even admits that if Anna ever asks for Vronsky in her illness, he will send for him straightaway.

Karenin also offers Anna’s illigetimate child the protection of his name and Anna a continued place in Russian society; for if she were to be divorced by him, as the guilty party, her entire ruination would come clearly to pass.

I will break, here, from the story of Anna and Karenin and Vronsky to touch briefly upon the parallel relationship of Konstantin Levin,  who harbours a passionate love for Anna’s sister-in-law’s younger sister, Princess Kitty: one almost as deep as his political believes in the obliteration of serfdom and his abiding love for the countrylife and his land.  Levin is the thinker and dreamer of the tale, as well as its moral compass. Many believe that Levin is the character deeply infused with Tolstoy’s own convictions and it is Levin who brings a dram of goodness to a drought of moral depravity.   Refused initially by Kitty who is deeply in love with Vronsky, the melancholy and philosophical Levin roams back to his country home and to the harsh work of the land, determined to marry a peasant woman and forsake the life, dust and iniquity of the city.  A chance viewing of Kitty----her carriage window open---her hair ribbons flowing on the wind, halts him and he once more takes up his suit.

It is a very interesting and pure take on love to contrast the conflicting and empty passion experienced by Anna and Vronsky.  At a dinner party at Stiva’s while the guests talk of infidelity, Levin, knowing only part of the entire puzzle invading the lives of the people around him, speaks out against infidelity and stays true to his belief in the power of pure love. It is here that we see Kitty’s face transformed and, later, in a deeply-stylized scene with an array of children’s toy blocks, they are able to silently forge their commitment to each other. 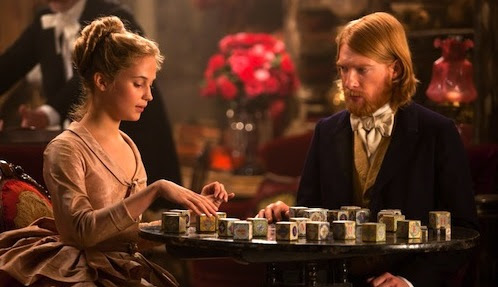 Levin’s story brings grace and humility to the opulent world destroyed by the likes of misguided and selfish Anna and her lover.  Levin brings his new bride Kitty home, perturbed that his alcoholic brother and his mistress will upset her delicate sensibilities and offend her careful breeding. Kitty transforms into a beacon of grace as she washes the withered form of her new brother in law and helps his fallen wife bring him comfort as he lay ill.

There’s a lot of God in Tolstoy, I told my friends last night, and it is in small, fleeting scenes like these that the dark clouds pervading the story are momentarily sliced with redemptive light.

Viewers of the film should know that Wright imagines the world of the novel as splayed out on a theatrical stage.  This might take a while to sink into: as he makes use of the wings and rafters, of floors devoid of red-velvet chairs and we are invited intimately into a world with a staged flair.  You will get used to it and the world outside will disappear.

This is a BEAUTIFUL movie. Its setting and design and costume and screenplay are all sumptuous.  Its ravaged characters with their deep sin and slipping honour are pitiable; but with Karenin and Levin we are given the true core of Tolstoy’s philosophy: the pursuit of goodness and redemption is a journey worth taking. Love is pure, too, and worth fighting for.  The “love story” of this piece does not exist between the extramarital passion of two physically attracted specimens. Instead it is displayed in the supporting characters and how they add slivers of hope to a depraved society.

So glad you liked this one, Rachel! :)

Beautifully, beautifully said Rachel!! I couldn't agree with you more!

Charity said...
This comment has been removed by the author.
11:51 am

I am hoping by the time I get around to watching this I will be reading again and will finally read the book...

Saw it this afternoon. Enjoyed it very much -- and it was GORGEOUS. I'm a bit sorry, though, that they cut so much of Kitty/Levin's story out, because that undermines the entire point Tolstoy was trying to make about lust vs. love. There's almost no religion left in it, which disappointed me -- but maybe to a pair of fresh eyes, it's there? I've seen a half dozen adaptations and read the book, so that made whatever was missing even more apparent to me.