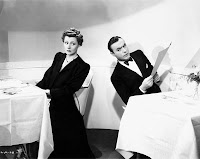 If you have never seen a Charles Boyer film, you are missing out. Iconically, he has entered our public sphere without notice by many: his daring thief in the 1937 film 'Algiers', Pepe Le Moko, was the inspiration for Pepe Le Pew--- the little, enamoured french skunk in Looney Tunes. Add to this Mr. Boyer's starring opposite some of the classic leading ladies of his age: Irene Dunne, Jennifer Jones, Bette Davis, Jean Arthur, Hedy Lamarr, Marlene Deitrich, to name a few, and you have a roster of exceptional viewage.

I have been pursuing a bit of an unofficial Charles Boyer Film Festival This Summer: largely because, for the most part, the film roles he took were in really, really entertaining movies.

You may be thinking: I don't know this film. But, yes. Yes you do. Chances are at some point in your life you have stumbled across 'An Affair to Remember': a word- for- word, frame -by -frame remake starring Cary Grant and Deborah Kerr. If somehow that eluded you, you caught 'Sleepless in Seattle': a big homage to the story featuring Tom Hanks and Meg Ryan --- clips of the Grant film are shown throughout. Perhaps you even caught the 1994 remake (it's the worst of the lot) starring Warren Beatty and Annette Bening: best known as being the last film Katherine Hepburn ever made. If you have ever thought of waiting for someone at the top of the Empire State Building at an arranged date, you have thought, subliminally, of this story. All four films, same source inspiration.

This movie, this screenplay ( penned in 1939 by Delmer Daves and David Ogden Stewart) is apparently so memorable that it needed to be made thrice. THRICE. .. with one popular homage.


I was reaching the point in my Unofficial Boyer Film Fest when this, one of his first American "talkies" ( he had done some silent film; but if you hear Boyer speak and immediately note, as I, that he could read the telephone book for a living, you recognize that these are not worth digging up and viewing) was in queue. I had to admit I was sort of "meh" about it. After all, I had seen 'An Affair to Remember' and 'Sleepless in Seattle' and I didn't really like either. Same story, mind, same inspiration and scaled love atop Empire State--- and I just didn't really care ( though I must admit to thinking of it while I was atop said State Building).

Oddly enough and completely unpredicted, I LOVED the 1939 Love Affair. Loved it! Charles Boyer and Irene Dunne had fabulous chemistry, the cinematography was interesting for its age and the playfulness of their "meet-cute" and courtship onboard the voyage that throws them together, the wistful, solemn and sacred visit to shore to Madeira and finally to the separation that blights their fateful meeting atop the tower worked very, very well. Of a story that I knew extremely well, this film made a surprise. ... it stripped all earlier familiarity and presented the same words, the same frames, the same characters in new, far more appealing light.


This preamble serves to pose the following question: in literature the same ingredients: words, settings, characters, plot strewn across two novels rarely happens ( except in adaptations, homages, pastiches) and the exact same story, told twice, would be easily differentiated, would it not? Is it even possible that one could tell word-for-word if Grisham copied all of Dickens' words--- in the same order? For truly, Affair to Remember is basically the closest remake of a film ever made... it's not even artistic re-interpretation---it's just the same thing...

but with different actors.

In film, two EXACT same plots and formulas are at the mercy of the director, yes; but mostly at the hands of the two leads.

The EXACT same scenes played by Grant and Kerr in the 1957 version left me completely flat--- but, the exact same words and scenes and movements and moments enacted by Boyer and Dunne worked wonders to a story I could, for years, take or leave.

The movie is one, sprawling cliche: at least by today's romantic dramedy standards. But, in 1939, the material was fresh---- it ends bittersweetly ( as those who have seen Sleepless in Seattle or Love Affair the Second by Beatty/Bening or the Cary Grant version will remember), it starts with a risque, tongue-in-cheek drip of banter between two actors who embody their characters so well you see their redemptions, their closeness, their slight changes before you.

Basically, this ramble is about the same thing. The same thing being told 3, 4 ( if you count the Nora Ephron Sleepless version) times; but only really working once.

Same script, same basic story... nothing special about it.... but somehow, the 1939 version struck a chord. It was touching, moving, funny and sleekly smart.

Major Bonus: it's in the public domain--- so hunt it un-guiltily on youtube and spend 97 minutes with a bonafide, Academy Award nominated classic.... starring Irene Dunne with her fabulous speaking and singing voice... and, of course, Pepe Le Pew.