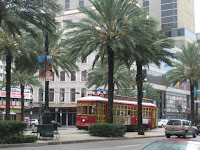 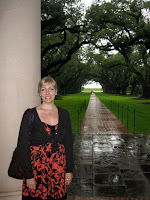 I just returned from a week in New Orleans with my friend Jess.

We stayed at the fabulous Maison Dupuy in the French Quarter, ate beignets, saw plantations and went on a swamp tour --- alligators swam up to our boat!
As a Canadian with a passion for Acadian history, I was greatly relieved to find that the Acadian ties in New Orleans are still prevalent. For those unfamiliar, the term Cajun is the evolution of the word Acadian. After the great deportation of the Acadian people from Nova Scotia and New Brunswick by the British (1754-62 thereabouts), many settled in Louisiana--- eager to be in an area that spoke French as they did. Hence, our long ties to Louisiana and the inspiration between Henry Wadsworth Longfellow’s poem “Evangeline.”
Indeed, alongside Longfellow, New Orleans has a rich literary history matched to its bustling, carnivalesque culture. While there, I described New Orleans as a sort of jubilant melancholia: a colourful parade of pageantry in its music, food, architecture and yet housing something so very dark beneath the surface. This makes for the perfect melodrama that has erupted in literary form.

Mark Twain called the city an “upholstered sewer” and winding the smelly, hot platitudes of Bourbon Street I can see where he got the idea. To read more of Twain’s initiation with the city, see the chapter entitled “The Metropolis of the South” in Life on the Mississippi. Margaret Mitchell set Rhett and Scarlett’s mythical honeymoon in the great city in Gone with the Wind and Tennessee Williams was inspired by the rambling streetcars ( the streetcar which hurries down the gorgeous St. Charles Avenue past tree-lined boulevards and statuesque old mansions was a wonder), the oldest in North America, when he wrote of that tragic, wilting Southern flower Blanche in A Streetcar Named Desire.

Truman Capote and Anne Rice write often of New Orleans; the latter being one of the city’s prime residents. If you venture into the Garden District, near the famous “ city of the dead” Lafayette Cemetary, you will find Anne Rice’s beautifully gothic old home. The cemetery and its environs paint a perfect canvas for her vampires ( see Interview with the Vampire as one example).

In Classics territory, the beginning of Manon Lescaut by Antoine Prevost and The Awakening by Kate Chopin both use New Orleans as their backdrops.

Finally, our pal John Grisham has used New Orleans as part of his unending love song to legal procedure coupled with southern morality in The Client and the Pelican Brief.

The narrative trajectory of slaves housed in cabins on the fringe of the great sugar cane plantations speak to the tragedy of the Slave era, yes; but also to the ability of story and song to withstand persecution and forced diaspora. Some of the Tales of Br’er Rabbit and other morality tales accredited to Uncle Remus winnowed from the plantations surrounding New Orleans.

The mélange of dialects resulting from the clash of American and creole cultures, not to mention laced with Caribbean and Acadian French make New Orleans a veritable melting pot of culture, history and snappy decorum.

Pending a close in-person immersion in the city my friend and I got to know very well, a mental “arm chair “ trip using one of the aforementioned stories as your portal is a worthwhile investment.

If you’re ever in New Orleans, I highly recommend the following:

A trip to the Red Fish Grill: delicious seafood in the French Quarter—great wine and ambience

A tour to Laura Plantation: a great Creole plantation and one of the best tours I have ever been on. This gorgeous building and its aligning slave row house some of the most brilliant first account narratives of the time period and the Golden Age of the South.

Café Beignet (the Bourbon St location)--we much preferred this to the much-lauded Café du Monde. Here, they serve hot and wonderful beignet and their patio seating in a courthouse dedicated to Jazz Legends is a treat. Every night trumpeter SteamBoat Willie and his crew perform a variety of favourites stretching eras --- a lot indigenous to New Orleans’ great jazz tradition and history.

Lafitte’s Blacksmith Shop--- now a bar, it used to house the iniquitous dealings of slave trader /rum runner/ pirate brothers Jean and Pierre Lafitte. One of the oldest buildings in New Orleans with a subpar martini but a great candlelit ambience.
Posted by Rachel at Tuesday, July 26, 2011

Email ThisBlogThis!Share to TwitterShare to FacebookShare to Pinterest
Labels: travel