Special Guest: on Why We Love CANADIAN AUTHORS 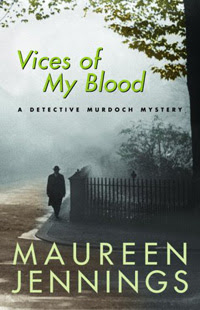 I was teased on twitter ( good alliteration, Rachel ) for being a nationalist last week when I was making people vote for Canadian YA for the Cybils! And I got to thinking about it and I AM A NATIONALIST! I love my country. I love our literary history and if I were born anywhere else in the world ( besides Victorian England) I would probably come and track Canada down because we suit each other.

So, she is guest-posting here today all about CANADIAN AUTHORS WE LOVE!

[Rachel Edit: This Will Ferguson cover is TAKING UP YOUR SCREEN! ]

Rachel asked me to write a guest post on Canadian authors that we both share a passionate and undying love for. And there are many, but here I will focus on our three biggest - Lucy Maud Montgomery (author of the Anne of Green Gables and Emily of New Moon series, The Blue Castle, and many other awesome books), Will Ferguson (author of HappinessTM, Why I Hate Canadians and co-author of How To Be A Canadian) and Maureen Jennings (author of the Detective Murdoch series).

[Rachel Edit: I was a reader for the Stephen Leacock Humour Award a couple of years back and met Mr. Ferguson at the big gala dinner. There, I got a napkin signed for Court. Huzzah!]

Our first shared love was the ever-brilliant Lucy Maud Montgomery. She is part of what brought Rachel and I together, and it is VERY rare that she is not brought up when we start talking about fictional male characters that we love - whether we are speaking of the top fictional males we will always love, debating which male leads are better (in the Emily books, she is for Dean, while I highly prefer Teddy), or are explaining how awesome other male leads are in comparison with other male leads. (For example, if Rachel were to say that someone was just like Barney Snaith, then I would know that he is a brilliantly charming black sheep.)


Then there was the brilliantly hilarious Will Ferguson, humourist and novelist. We may both have huge writer crushes on him, with perfectly good reason. First: he is Canadian and writing about a country that we both love. Second: he has that signature Canadian wit, even in his novels that don't take place in Canada (though Rachel has still as of yet not read Spanish Fly, no matter my attempts at coercion).

[Rachel Edit: I will read Spanish Fly when Courtney reads The Blooding of Jack Absolute which was not written by a Canadian but has enough Canadian stuff in it to make it Canadian]

Lastly, there is Maureen Jennings. Rachel has been a Jennings fan for a long time - she even goes so far as to actually know the author in real life! Sadly, though, Jennings is a newer discovery for me; I only started reading her Murdoch books a couple of years ago. One of the best things about this series is that it takes place in Victorian Toronto - a place we know in a time period that we both are rather fond of. (I also hear that Rachel love Jennings' other series, which takes place up in her home town, but I haven't read those yet - so looking forward to it though!)

So what is it about these awesome Canadian authors that make us love them so much? I've been thinking about this for a few days, and I think there are two reasons. They write with passion about Canada. The books may not speak specifically about the country, but it's evident they way they describe the places their books are set in that they love their country. And Canada's geography is all so vastly different! Just by reading Jennings' books, you can feel like you've been to Toronto at the turn of the twentieth century. By picking up one of Montgomery's books, you can visit either PEI or Northern Ontario - and you can SMELL the sea coming out of the pages from Montgomery's books that take place in PEI. And Ferguson, oh, Will Ferguson! Specifically his Beauty Tips from Moose Jaw - this book takes you on a cross-country tour that is chock-full of history, so what is not to like about it? Then there is the fact that they write in a way that is so obviously Canadian. Canadians have a distinctive voice - you can see it a lot in the tv comedy shows we produce. It's a lot more like the British humour than it is like our southern neighbours, the Americans. It's drier, less in-your-face, and more polite.

We also like to make fun of ourselves quite a bit. This humour is most evident in Ferguson's works, but there are hints (hint the size of a two by four being smacked along the backside of the head in some instances) of it in Montgomery's and Jennings' works as well. Even without the humour there is something distinctly Canadian about these authors' books, though it is hard to put a finger on exactly what it is.


Of course, there are many other awesome Canadian authors that we both love - Arthur Slade, Maggie Woods and Gordon Korman (mainly his older stuff, mind!) - but these three share the most fangirlish love that we have for authors. And I have to say that it IS a passionate fangirlish love that we are both proud to have and spread (sort of like a bad bout of the flu, only much more enjoyable!).

And I WILL read The Blooding of Jack Absolute! I will, I will!!

Hey CC Humphreys is a Canuck, with Brit accent. He lives in Vancouver...anyway...

How could you forget them!?!?f

I'm a nationalist, too. I accepted that years ago. I didn't know you girls were huge Will Ferguson fans! I love his books. :) Actually, I love most of that which has been discussed in this post, but that is not surprising!

I need to read The Blooding of Jack Absolute, too...