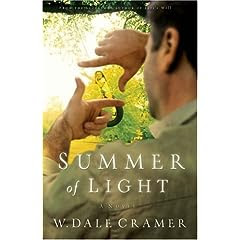 
Reading Lynn Austin and W. Dale Cramer in the same week reaffirms my long-standing opinion that they are the two strongest writers in the Christian marketplace. I fell in love with Cramer’s prose when I read Bad Ground and then subsequently with the rest of if his novels. Cramer once mentioned in an interview that some of his greatest influences were Faulkner and Steinbeck. Reading his thoughtful, well-embroidered yarns you can easily detect this influence. Though Summer of Light is a bit of a more breezy read without the seeming emotional or thematic depth of Bad Ground and Levi’s Will, it is still an exceptional novel... And, when held up against other contemporary Christian novels manages to pack quite the punch.

Mick Brannigan is a tough iron worker with set views that a man’s place is as the breadwinner. Though Mick loves his kids and his paralegal working wife, he is steadfast in his beliefs that he should be out of the home and on the job. After an unfortunate accident, Mick is forced to leave the working world and care for his three children: Toad, Ben and the sometimes challenging Dylan.

More than a “Mr. Mom” story, Summer of the Light is a novel of perspectives cast by differing shards of light. The search for the perfect light and the challenge to capture the perfect light is a resounding theme in the novel. Mick’s talent for photography, his upscale neighbour Aubrey’s coaching and the homeless man-with-no-hands’ classic opinion help Mick thrive in an element foreign to him: one of art and light borne of seemingly commonplace circumstance. This light, as embodied in photography, in the stainglass of a monastery, in a sunrise over a ramshackle barn was ( to this reader) the manifestation of God in human places.

Mick sees most clearly when things are reflected in a certain light. This ironworker/ photographer has an almost preternatural reverence for light at angles and the perspective these angles give him. The reader is given the same perspective as Mick as he is the character driving the novel.

From a monastery, to an empty barn to a homeless sector beneath the bridges, Mick’s photographic eye snaps everything: Hope, Charity, Emptiness, Faith …. People, his kids and a zillion different reflections.

Cramer is magnificent with symbolism and theme. Some if his descriptive prose is quite breathtaking and he does well in using photography and an artist’s eye to capture the exceptionalities of what Mick once found commonplace.

Tolkien once mentioned that his Lord of the Rings novels were a type of “pre-evangelum”: stories with symbols and archetypes which bordered on the metaphysical--- prodding readers to contemplate rather than receive a forced conceptualization of theology. I feel that Cramer uses this same practice. Though his characters ( especially the Preacher) are recognizable symbols of Faith, there is nothing explicity or exploitatively “Christianese.” Instead, Cramer infuses Christianity through practice rather than words. Any Christianity is embodied through actions. Cramer mentions something along the Francis of Assisi line “ preach the Gospel, if necessary use words” ( my paraphrase) when Mick realizes that Dylan will mirror his actions rather than internalize his words. Cramer doesn’t bludgeon you over the head with the Gospel, rather he credits the thinking reader with enough dots to be connected: parables to be chewed over and aligned with resonant Faith.


My only Cramer complaint is that the Christian reading populous has heard nothing of him since this publication two years back ( I just read it now. I was saving it for a rainy day). I wish he would come out of hiding because the Christian book publishing prospect of 2009 is rather empty without him.

More W. Dale Cramer? He will completely overhaul any preconceptions you had of Christian fiction


...and hold on. I will get to Hidden Places! I am just savouring a re-read. I always go through a fantastic book and re-read my favourite bits to pick up any thread I missed.