It is so hard to get me to fall for a contemporary Romance.  It is not often my genre of choice and as readers we all know that we get in moods and rhythms and we need certain books to meet our cravings at certain times.

I LOOOOOOOOVE THIS BOOK

I LOOOOOOOOOVE how it features a freakin' smart as all get out heroine whom the hero is never ONCE intimidated by. Indeed, her brains are what attract him to her! UGH! SO GOOD! FOREVER I LOVE THIS!

We have a typical romcom set up here: neighbour finds neighbour annoying. He doesn't understand the basic courtesy rules of the laundry room.   Jonathan smokes on his balcony and it wafts into  Esther's  apartment. His wind chimes keep her up at night.

We have the bargain trope: she'll look at annoying neighbour's sci fi manuscript (he's a screen writer! Well, it is set in L.A) through her aerospace engineer eyes and he will take her best friend Jinny out on three dates to keep Jinny from getting back together with her dbag ex-boyfriend.

Jonathan and Esther start working on manuscripts and slowly ease into each other's lives like a comfy sweater and...well... the rest isn't rocket science. 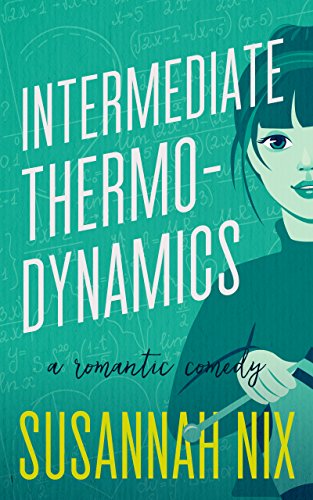 "Objectively, she supposed he might be considered attractive--so long as he didn't open his mouth and start talking"

See, even a revisited trope or plot (as Northrop Frye says, there are only like three different stories in western literature), can become something entirely new when a fresh voice is at the helm.   Nix excels at embroidering a tapestry of likeable and relatably flawed characters, a world that is fascinating and merges science fiction, with, well, sciency-science, blurt-your-tea-out laughter and a starkly honest look at two people recognizing that their Social Anxiety is what has kept them from crossing their respective thresholds.

It is also a treatise on love and attraction borne out of an endearing friendship. In short, it is an intricate study of human nature wrapped up in a sparkly rom com bow and it is oh so fun to read!

And beyond the friendship that turns into something deeper in Jonathan and Esther's court, we have a study in female friendship and work friendship --- all cogs in the wheel that allow us to understand Esther (prickly and scared and closed off) in her journey toward authentic vulnerability.

Vulnerability and honesty, the book asserts, is the sacrifice that can lead to restored friendship, love and, at the forefront, personal fulfillment.

"She'd pygmalion the s**t outta him"

Esther is so concerned at seeing the limitations of and propensity for change in others that she spends most of the novel failing to invest in her own self improvement.  The counterbalance she finds in Jonathan and his friendship complementing her as well as stretching her in ways she wouldn't have imagined possible, is at the core of the book.

Esther learns and in the softest timbre.   For example, the first time she gives Jonathan feedback on a manuscript it is thoroughly critical and less constructive. The second time, she makes a small nudge toward  framing her comments in a more palatable way.

"It was one of those aimless indie dramas about two people who meet by chance and change each other's lives forever blah blah blah...."

And when Esther's perspective of Jonathan changes, so does her ability to stretch and shift and see the world through a different, enriched lens.

Esther never thought she needed to be in love .Love meant hurt. Love meant confronting the unresolved issues with her family: a father that left, a mother that is in constant need and rarely self sufficient. Absence and suffocation with no middle ground. Yet, this book delves into intricate and deep places without turning in to a "subject" piece.   A lesser writer and this would be an issue book or wade into women's issues that make you want to skip it all and watch Hallmark.  The buoyant tone, the attention to every detail, the perfect world building in the sphere of Esther's apartment life with Jonathan to her knitting group to her super sciency day job ---are all expertly explored. There is not one wasted scene.

"She wasn't waiting for a man to come along and complete her."

Sometimes the truth through fiction stings. Sometimes watching Esther's choices forces you to confront your own anxiety, your own sift through feelings of rejection.   "If you never let yourself care about people," Esther has taught herself, "it didn't hurt as much when they didn't care back."

When Esther lets herself give into attraction, it has been a slow build borne of chemistry-- and not the boring dime-a-dozen physical kind, the kind that comes from learning someone is the other puzzle piece missing.

What was with her? Drooling over a glimpse of calf like a sex-starved Victorian duke in a romance novel!"

And when it reaches an inevitable boiling pot and Esther accepts that she is going to have to take a step to reach the strides he is taking, it is painful to watch ---but still interspersed with heartmelting acts of friendship and love.   The boring indy romance screenplay has been rewritten --like Esther's life and view of the world-- and somehow she is able to meet it in the middle with her new perspective and its new timbre and it is something achingly winsome.  "It was almost like reading a diary of their friendship."

What Intermediate Thermodynamics resoundingly excels at is providing a thesis of change.   We are talking deep and subtle tics and beats that layer the book like a freakin' cake.  And then some.

We fall for Jonathan before Esther can catch up.  We want to shake her and hold her all while so deeply identifying with her fear of love and rejection that we want to hold her in a vulnerable ball while confronting our own limitations. We recognize that, as Nix writes "The point is to do something that's hard for you because it's meaningful for someone else."

It is a book about sacrifice and evaluation, of letting people love you, of believing yourself deserving of ownership of one's personal and professional strengths and weaknesses.

Indeed, to take a deep look at the finer tenets of Jonathan and Esther's relationship (to wit, even Jinny and Yemi's relationship with Esther) is to hold a mirror up to our weaknesses and Esther's gradual and realistic inch toward triumph echoes with an acceptance that brings the reader-author relationship full circle.

Intermediate Thermodynamics is a layered and subtle and magnificent look at modern relationships through a perfectly constructed lens of timeless themes. It is funny and smart and aching and beautiful and will make your heart grow three times. You will laugh aloud, you will cry, you will revisit your weakest moments and find yourself stronger for the confrontation and ultimately you will want to find yourself falling mind-numblingly, friendship-inducingly, marshmallow-gooingly in love

(pending that, at least finding the next in Susannah Nix's library)

If your man is pushing you away and acting distant

Or if the guy you’re after isn’t giving you the time of day...

Then it’s time to pull out all the stops.

Because 99% of the time, there is only 1 thing you can say to a standoffish guy that will grab him by the heartstrings-

And get his blood pumping at just the thought of you.

Once you say this to him, or even send this simple phrase in a text message...

And even begging to be with you.